I recently returned from a quick trip to Montana and Wyoming.  I took enough photos that I'm going to divide them up into separate posts on this blog.  The first post will focus on birds.
We started out by stopping at McGregor Marsh in northern Minnesota.  Target?  YELLOW RAIL and NELSON'S SPARROW, of course. And like clockwork, we found a calling YELLOW RAIL around 11:30 PM.  A NELSON'S SPARROW was also singing in the area:  Here is a map if you're interested:
View YERA in a larger map
We continued west via North Dakota.  We stopped at some prairies to check things out and ended up snagging things like SPRAGUE'S PIPITS and this defensive MARBLED GODWIT: 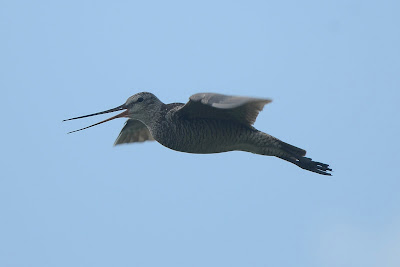 Now fast forward to Glacier National Park, our actual destination.  It didn't take long to find numerous TOWNSEND'S WARBLERS singing in the forested areas.  I didn't focus much on these guys and snapped only a couple of shots of a bird that was singing from the top of a spruce: 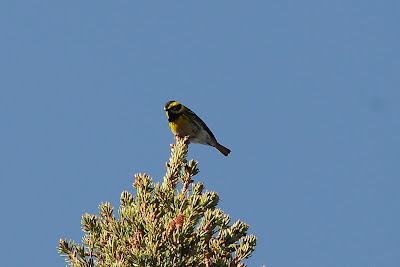 The campground at Two Medicine was really neat in itself.  There was a reliable pair of PINE GROSBEAKS that favored one campsite in particular.  Here is the male: 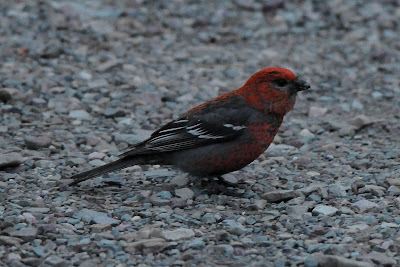 Another common species in the campground were the constantly-singing MACGILLIVRAY'S WARBLERS.  Here is a grainy picture of one taken during the early morning hours: 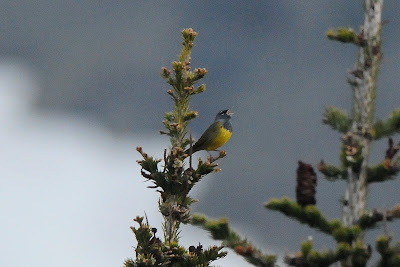 I was happy to hear some singing VARIED THRUSHES from the campground as well.  Their bizarre songs have always ranked highly with me.
An early morning drive down the road from Two Medicine yielded this DUSKY GROUSE alongside a road.  This was only the second time I've seen this species: 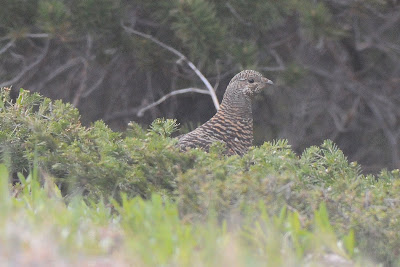 We later caught up to a RED-NAPED SAPSUCKER.  These ended up being fairly common during our stay there.  Here is one of the first ones: 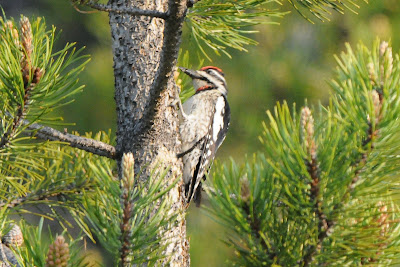 I was surprised by how bold other MACGILLIVRAY'S WARBLERS were during our stay.  I tend to think of these guys as being sneaky but they were the opposite during the morning when they perched out to sing: 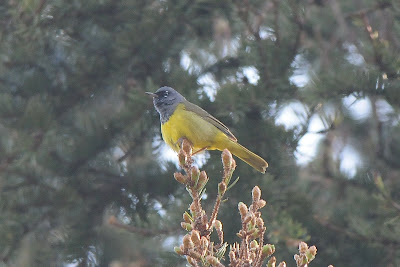 This next photo is quite a joke.  It's a male LAZULI BUNTING, in case you don't have your magnifying glass handy: 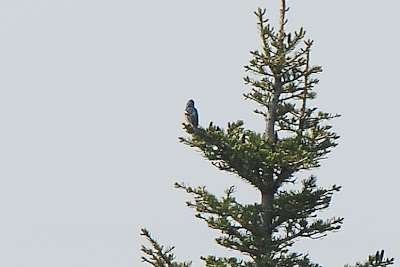 Ok, nevermind, THIS photo is a joke.  It's a very out-of-focus MOUNTAIN BLUEBIRD: 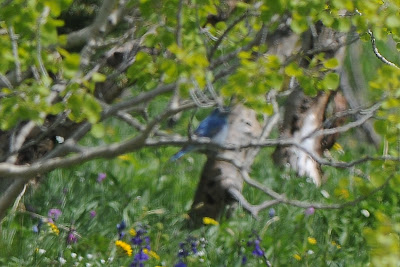 Eventually improving on my own pictures throughout the trip, we found a more agreeable RED-NAPED SAPSUCKER later on: 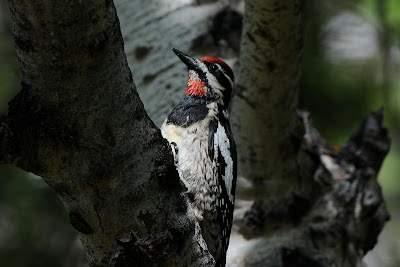 Over on the west side of the park, there were a couple of VAUX'S SWIFTS flying around a gas station. This was a new "photo bird" for me and although the photo isn't anything nice, it's enough to prove it: 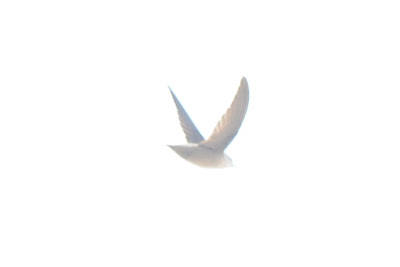 I didn't have much of a reason to snap a shot of this RED-BREASTED NUTHATCH except that it seemed like it needed attention: 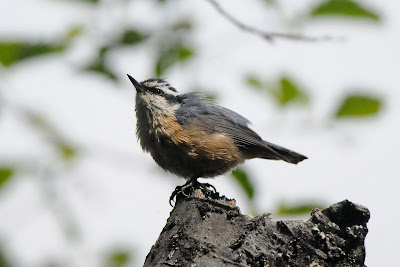 Another new photo bird (and thus a target of mine) was CASSIN'S VIREO.  We found our first one on the east side of the park but later found several on the west side of the park.  Due to camera difficulties I didn't get a great shot.  However, I DID get some kind of proof: 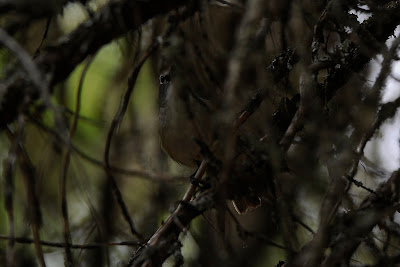 Our next destination was southern Wyoming but I'll get to that in a second.  To get there, we had to drive through Yellowstone National Park and Grand Teton National Park.  Camping was full so we didn't linger too long amongst the vacationers.

We birded along Blacktail Plateau Road in the northern half of Yellowstone and ended up seeing a couple of target birds.  Although the road was gated off, we walked in a little ways and quickly found a pair of WILLIAMSON'S SAPSUCKERS.  This was only the second time I've seen this species in my life and it was also a new photo bird: 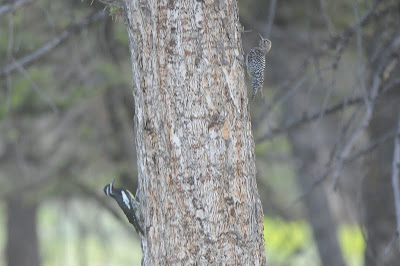 Here is a map of the area that the sapsuckers were frequenting:

View WISA in a larger map
We also found another target species, CASSIN'S FINCH.  Believe it or not, this was also a new photo bird: 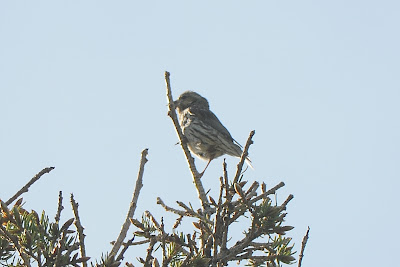 ... as was this putative DUSKY FLYCATCHER: 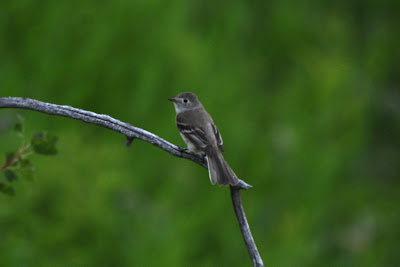 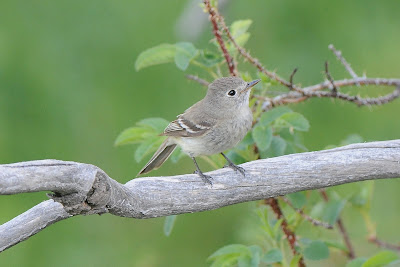 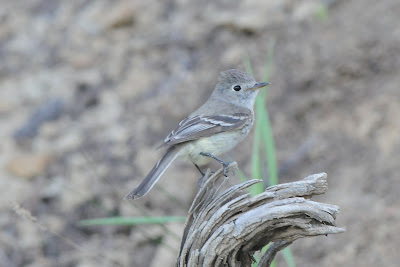 As we were leaving the area, we found a noisy bunch of CLARK'S NUTCRACKERS, surprisingly our only on the trip.  Here is one perched up keeping watch: 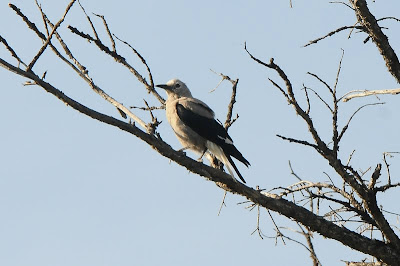 Need proof that there are sapsuckers in the area?  Check out this sapped tree along Blacktail: 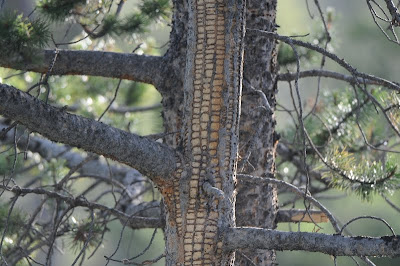 Another target was BARROW'S GOLDENEYE, a species I hadn't seen yet this year.  We eventually found a male along a river: 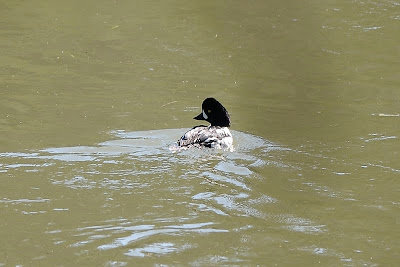 ... and then a distant, solo male on Yellowstone Lake: 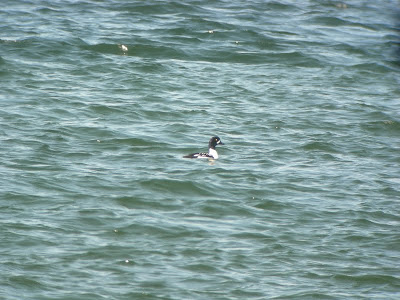 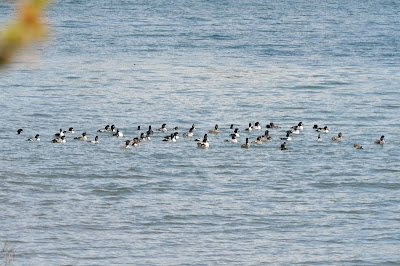 I would welcome opinions regarding this four-year gull I photographed on a sandbar of Yellowstone Lake.  Any of the four-year gulls are out of season in Yellowstone right now but during the winter, HERRING GULL is probably the most common.  However, I thought the size of the bill on this bird was exceedingly large for a HERRING GULL.  Might it be an out-of-place GLAUCOUS-WINGED GULL?  Unfortunately, the bird is so bleached out that it might not be possible to tell: 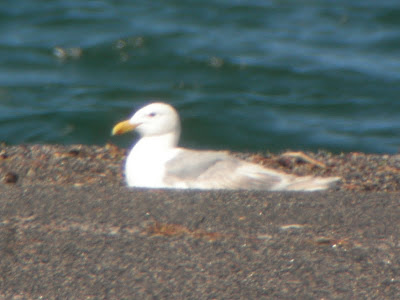 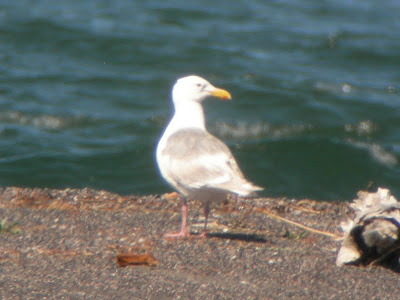 It was at this point that we left Yellowstone NP and headed south through Grand Teton NP.  At a random overlook, this obliging GREEN-TAILED TOWHEE had NO qualms with singing at point blank in front of me: 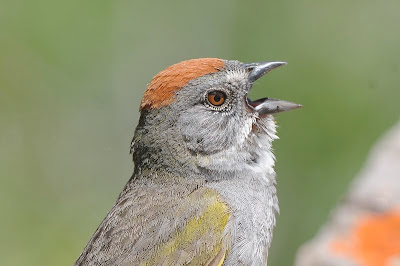 One of our targets on the trip was SAGE THRASHER.  Thanks to a tip, we found an easy one singing just north of the Jackson Hole Airport.  The view wasn't great but it WAS a new photo bird: 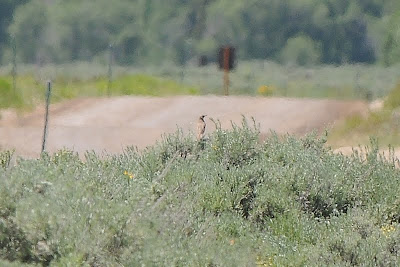 We continued south and birded near Seedskadee National Wildlife Refuge for a couple of hours and ended up with great looks (and photos) of another target bird, the SAGE SPARROW: 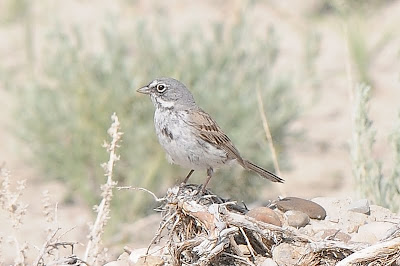 And of course we ended up finding more SAGE THRASHERS here.  Thankfully they gave us some better looks: 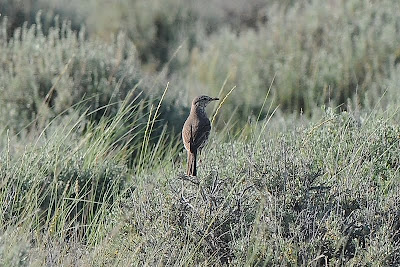