Birds of Hawaii, New Zealand, and the Central and West Pacific

"Birds of Hawaii, New Zealand, and the Central and West Pacific", by Ber van Perlo, was published in 2011 by Princeton University Press.

The next in my series of book reviews is in the Princeton Illustrated Checklist series.  If you're familiar with these types of books, great, but for those of you who are unsure what they're all about, this post is for you.
I was particularly eager for this book because I have spent time in Fiji (2004) and Hawaii (2006) and I remember thinking that there needed to be a better source for the region.  This guide is the only book that encompasses these regions, no small feat considering this area of the globe is so expansive.  Let's break it down little by little....
Size-wise, I would consider this book to be "pocket-sized" because, let's face it, if you're traveling to these areas, you won't want a giant beast of a book.  You will notice that this book is considered an "illustrative checklist", not a mother-of-all encyclopedic sources of the meaning of life.  As you can see, it's smaller and WAY thinner than the Sibley Guide to Birds: 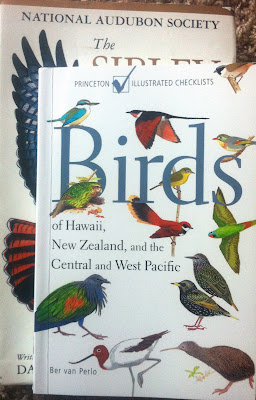 Are first impressions everything?  I would argue an emphatic "No!" to that.  Why?  The very first time I opened up this book was I actually unimpressed.  However, the more time I've spent with it, the more I realized that it's actually quite good!
The plain-and-simple reason for that initial thought was the art.  I have grown accustomed to field guides made by world-class artists and sometimes it's hard for me to adjust back to art that is not as detailed.  But as I dug deeper into the book, I realized that the art was only a very small downfall.
For being a smallish book, I was surprised by how much information was given in the 12-page introduction.  Topics like environment, plate tectonics, reef building, and vegetation types are all mentioned.  Along with illustrations of these topics, it's a nice crash-course of natural history of Pacific islands.
The author then devotes another introduction section of the book to divide up the region into maps and to list the endemic species per map.  For example, here is the intro map for New Zealand: 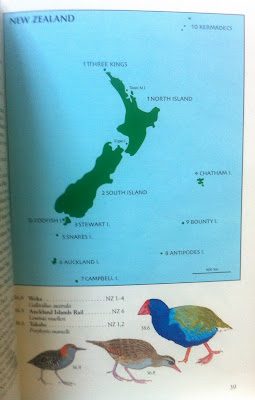 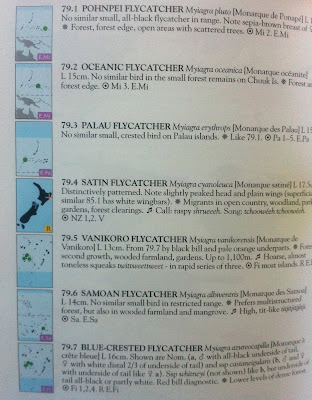 Here is a closer look at the range maps: 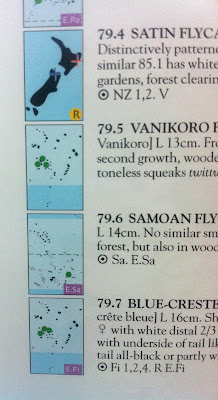 I was completely overwhelmed at first with the range maps.  They pack a LOT of information into a very small space.  As you can see above, some species have a purple box in the lower-right corner; this indicates that it's an endemic species (E.Sa = Samoa and E.FI = Fiji, etc).  Green dots represent island populations and the yellow circled "R" in the lower right-hand corner represents "rare".  There is also a series of stars and crosses which represent a "normal visitor" and "vagrant species" respectively.  The color of those stars and crosses represent which season it's most likely to be seen (green = resident, red = Apr-Sep, blue = Oct-Mar.).

So look above again give it a try with those species... does it make sense?

I was concerned that I wouldn't know where exactly the green dot was (some of those islands are SMALL).  Well, the author thought of this and gives a great solution.  In the text of each species is a short-hand for range.  Look on the last line of 42.4 below: 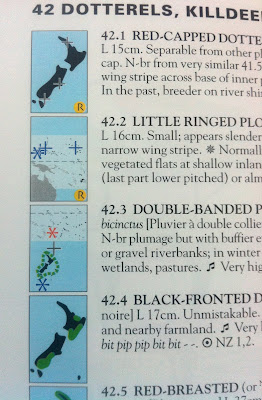 You'll see it says "NZ 1, 2".  Flipping to the previously-mentioned maps at the start of the book, you'll see that the New Zealand region was split into 11 different islands (numbered 1-11) and the code says that this species will be seen on 1 (North Island) and 2 (South Island).  This scheme is ingenius for island clusters with as many as 30 individually numbered islands.

So when you look at the map for Gambel's Quail, you'll instantly see that it's introduced to Hawaii (islands 1, 2, 4) and is rare.  This method saves tons of space and allows the book to be compact.

So are these data actually accurate?  I spent 3 months at French Frigate Shoals in Hawaii (which is Hawaii number 11 in this book) and so this book would have been perfect for my time there.  Too bad it was published 5 years later!  Let's fact-check what the book says....

Christmas Shearwater - The book says it breeds in places like Hawaii.  They're right, they bred on #11.

Ok, so there might be a discrepancy here and there but overall, is there any other book that even comes close to summarizing all this information?  No, not even close.

I really wish this book were in existence 5 years ago when I worked in Hawaii.  I remember going to the island and not knowing what I was looking at!  This book would have been a concise solution.

In summary, the small book size, informative maps, detailed endemic information, and broad geographic area makes this the best source of info for this area as a whole.  You really should pick up a copy of this book if you plan to bird the islands, plain and simple.

Disclaimer:
I received a complementary copy from the publisher for review purposes, but the viewpoint expressed in this article is entirely my own.
Posted by Cory J. Gregory at 7/19/2011 04:06:00 PM