Six days ago I posted here with a picture of snow.  And then it warmed up nicely into the 80s.  I honestly thought that was the last of the winter weather but, as I type this, it's snowing outside here in northern Missouri.  :-(

Although the spring continues to have a hard time warming up here, it hasn't kept everything quiet.  Some of the breeding warblers have returned to the area including YELLOW-THROATED WARBLER, NORTHERN PARULA, and LOUISIANA WATERTHRUSH.  Hearing those songsters for the first time each year is a big part of what spring means to me.

Speaking of what spring sounds like around here... this CAROLINA WREN was amped up one morning (enough so to wake me up) and so I recorded it with my phone through the bedroom window:
More than warblers have returned to the Hannibal area though.  We've had quite a few BLUE-GRAY GNATCATCHERS make it back, a few CHIMNEY SWIFTS were seen swirling above downtown, and we had an early WARBLING VIREO in the yard a few days ago.

Ash and I also visited Ted Shanks Conservation Area this past week.  There was the expected variety of birds on the water like this PIED-BILLED GREBE hiding, albeit poorly: 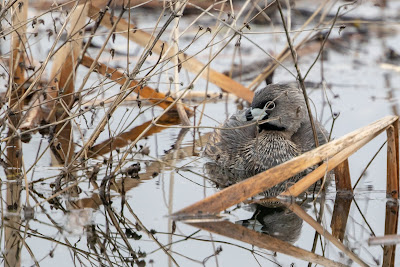 Common on quiet water this time of year, HOODED MERGANSERS have been around including this male that was in a side canal: 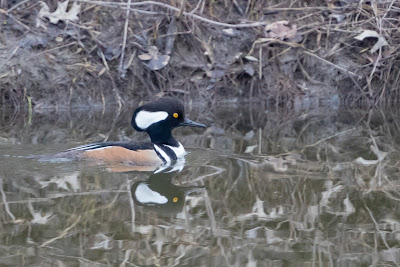 I've been impressed by the number of Aythya that are out there.  This genus of diving duck includes species like Redhead, Canvasback, scaup, etc.  Here's a male LESSER SCAUP: 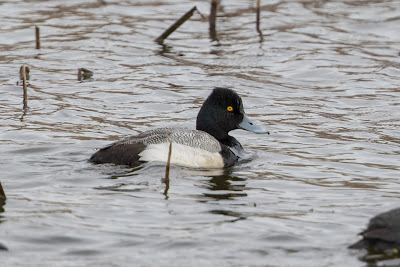 I'm still waiting for the big push of shorebirds.  So far, besides the abundant things like KILLDEER and WILSON'S SNIPE, I've only seen PECTORAL SANDPIPER a few times and both LESSER and GREATER YELLOWLEGS.

Here's a WILSON'S SNIPE that stayed put as our car rolled up beside it: 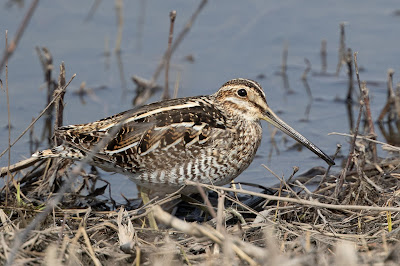 This species used to be conspecific with Common Snipe until 15 years ago when it was given full species status.  It's named after Alexander Wilson (1766-1813), a well-known ornithologist who, although born in Scotland, emigrated to the US in 1794 and spent the rest of his life there.

That same visit to Ted Shanks yielded a variety of other migrants too (we ended with 60-70 species in a few hours).  We came across this resting flock of white geese: 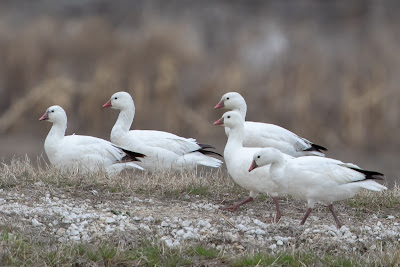 The ones you see in the photo above, with their small and rounded heads, short and triangular bills, are ROSS'S GEESE.  It wasn't a homogeneous flock though... check out the white goose in the background here: 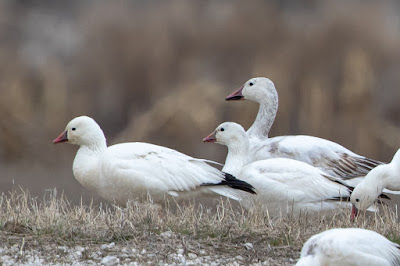 That, of course, is the larger (and typically more common) SNOW GOOSE.  Note the difference in overall size of the Snow Goose (bigger),  the shape and size of the bill (again, bigger), and the black "grin patch" on the bill (mostly lacking in Ross's Geese).

Later in the week, Ash and I took a quick spin around Mark Twain Lake to see what was happening.  This man-made reservoir, which is the largest lake in northern Missouri, sits about 20 minutes to the west-southwest of where we live.  Here's a screen cap from Google with a pin on the lake: 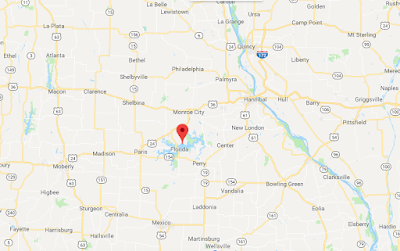 There weren't too many surprises really on this visit... things like BONAPARTE'S GULLS were present in good numbers, our first FORSTER'S TERN of the spring was perched on a buoy, and a HORNED GREBE was showing its breeding colors nicely.

The rarest bird of the morning was this white blob at a marina that we check: 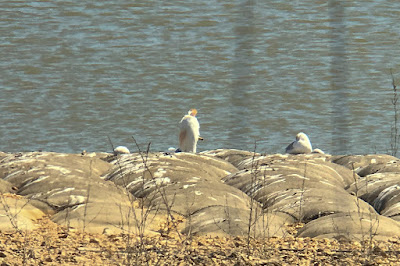 That's a CATTLE EGRET and it represents the first all-time record of that species for Ralls County.  Here's the eBird map for Cattle Egrets so far this year... you can see that a few have made their way into the Midwest in the last month: 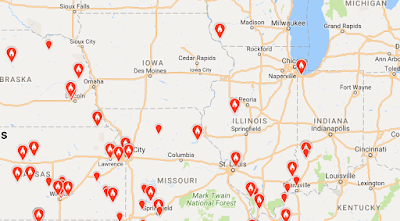 Not rare by any means, we still have lots of BALD EAGLES around including this youngster that flew by at the lake: 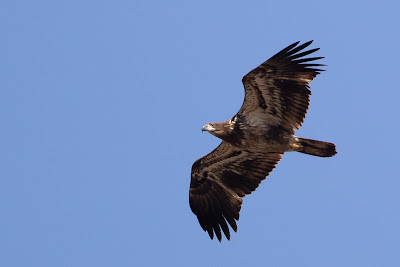 No, it doesn't have the white head yet.  Only eagles that are ~5 years old or older have that white head that most people associate with the species.

On the other side of the size spectrum, here's the not-so-big BROWN CREEPER that was seen nearby: 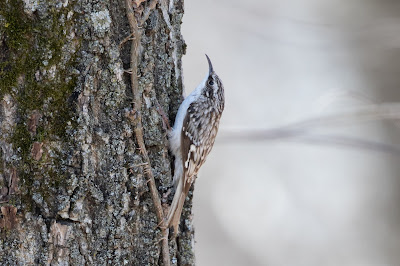