A SWIFT GUIDE TO BUTTERFLIES OF NORTH AMERICA, 2ND EDITION

The second edition of "A Swift Guide to Butterflies of North America", by Jeffrey Glassberg, was published in 2017 by Princeton University Press.  It's a 416 page paperback that costs $29.95.  You can find it online here. 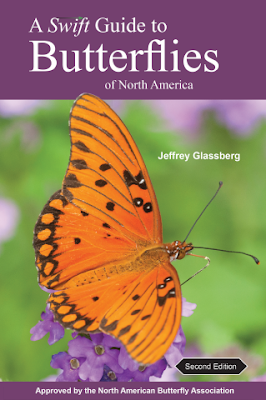 Although butterfly weather has been slow to arrive around here in northern Missouri, I have seen a couple of species just in the last week (Red Admiral, Spring Azure, and some kind of fly-by comma).  Given that, I thought maybe it was a good time to review this book to see if I wanted to give it a go this year.

It's been a while since I've posted a book review, actually.  As I often do with these, I took a few simple pics of the book and will share them here.  I don't tend to rant on and on about minute details on a species-by-species basis... I'm just here to share my overall thoughts and I try to keep them brief.

So, you open the front cover and you're greeted with this "How to Use This Book" key:

Although most of it looks pretty straightforward, you'll see a variety of colors denoting different number of broods, and then another set of colors for range.  Hmm, that seems like it could be confusing, no?  And then there is another key with additional material: 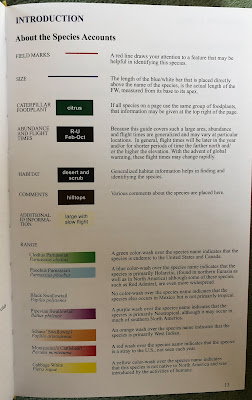 It's at this point that I stopped trying to remember everything.  It's a lot of information if you're a casual user but I guess they had to key it somehow.

Moving on to what the species accounts look like... I'll just share a variety of these.  First up, this guy: 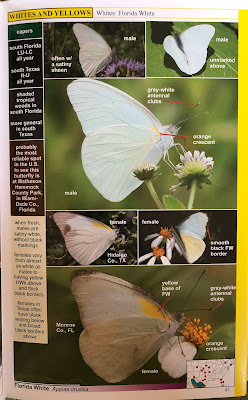 Right off the bat, I wondered "Where on earth is the NAME of this thing?".  Right at the top?  Nope, it says "Whites and Yellows", a broad category.  That's not it.  How about next to that?   It says "Whites: Florida White".  Is that it?  Seems weird to have the name framed like that in a small, normal font.  Anyway, I'll just spoil the surprise... the name is at the BOTTOM of the entire species account.  I'm not a fan of that at all.  I suppose a user could get used to this but if every other field guide has the name easy to see at the top, why change it up?

Let's try a different page and see how it's displayed there: 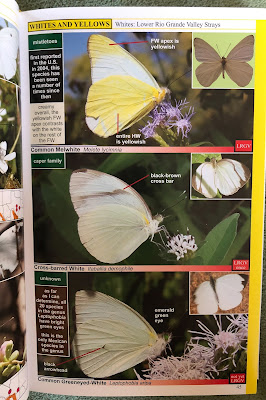 The top is still dominated by the yellow-colored banner reading "Whites and Yellows" with another banner next to it saying "Whites:  Lower Rio Grande Strays".  Ok, so that banner seems to be more of a subspecific banner.  But again, the names of the butterflies are beneath the species account which, as you can see above, becomes more confusing because there are three species on this page.  There's even a black line above each name which makes it even more confusing... the line isn't being used to separate anything despite there actually being a need to separate the species!

Here's another species account or two, this time from the Gossemerwings section: 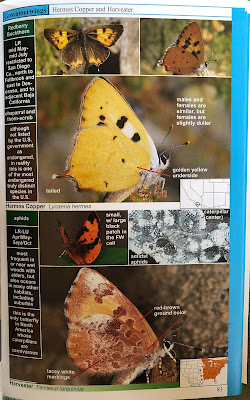 I should point out how these have range maps... gotta have those for a book that covers all of the US and Canada!  The range maps ARE small though so brace yourself for that.  Granted, it would be hard to make them much bigger with how much other stuff is packed in.

It's also clear by now that this is strictly a photo guide.  The photos are big and top notch.  Oftentimes, they include photos both of the closed wings and open wings.

To the left of the photos you'll find a couple of boxes with text explaining habitat, various notes, and abundance.  You'll see in the abundance box a "LR"... I'm sure we can figure this out by referring to the front but... hardly seems worth the effort.  That leaves me assuming it means "locally rare"?  Probably.

Here's another spread, this time with four species: 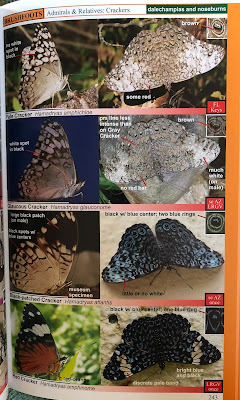 These are more compact and so you can see they opted to skip the range maps and just put a short "LRGV once" or similar description.  They squeezed in brief info about foodplants but left it at that, they were forced to leave out habitat, seasonality, and abundance info.

How about this page? 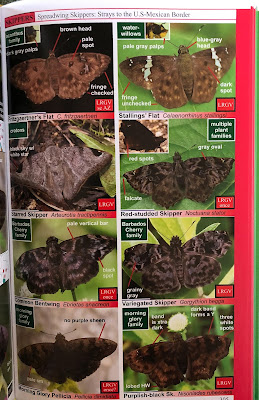 This has a whopping eight species crammed in, all of which are LRGV species (short for Lower Rio Grande Valley in Texas).

Here's another view, this time of a skipper... the very rare Poweshiek Skipperling: 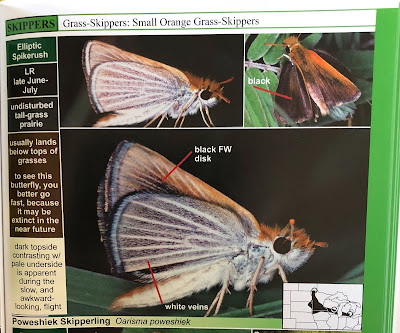 Speaking of that species, it's one I've never seen and would love to try for... if they're still even in existence.  Last I heard, there were probably about 500 left on earth, many of which are in Michigan.

Here's another skipper or two, some giant-skippers: 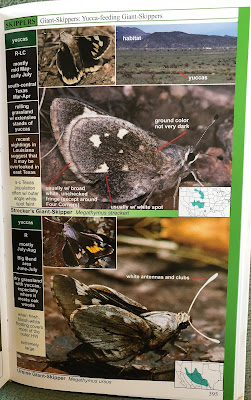 As you can see with the Strecker's Giant-Skipper, included is a picture of the landscape where you might find this species.  A neat inclusion.  (As it so happens, I saw these often in western Nebraska and, aside from those mountains in the picture, the landscape looks right on).

At the end of the species accounts, I was surprised to find a couple pages with a few species found in Hawaii (two of which are native).  Pretty cool... now I just need to get to Hawaii to work on my Hawaii list! 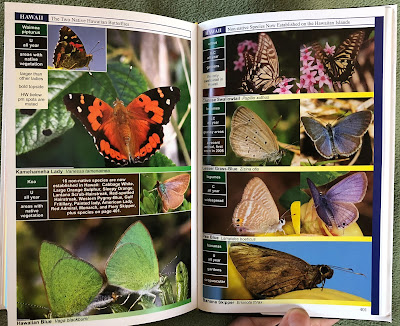 I thought this was interesting... there is an index of foodplants in the back, in case you wanted to take that angle on identifying something: 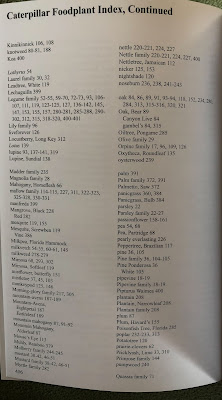 And then there was the traditional index after that: 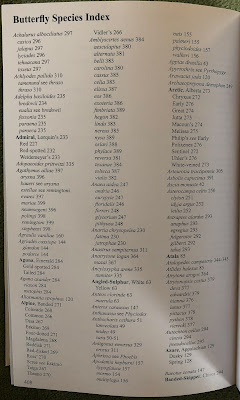 This is also somewhat interesting... there is a "visual index" in case you wanted to skim through by sight to see if you could find a match (or something close).  This seems like a good idea and I admit that I haven't used something like this before: 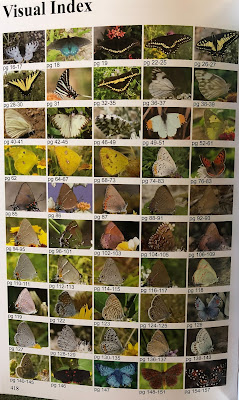 This book has a lot of information, plenty of nice photos, and an emphasis on foodplants.  All good things.

The photos in this book are top notch.  For that alone, this book is valuable to have on hand if you want to dig through a variety of guides for additional studying.

The author, Jeffrey Glassberg, is a well-known expert and this book really displays that impressive knowledge.  I don't know him but I know he wanted to author a book that had EVERY species in it, that is clear by flipping through the book.  But, I wonder if that goal came with a price....

I don't like the layout of this book at all.  I'm not a fan of data cramming and, to me, the layout of the text (things like the name placement) is poorly designed.  There is plenty of information in this book, true, but it hardly seems cohesive, standardized, and the knowledge certainly isn't displayed in a user-friendly fashion... at least not for this user.

The back cover says "The most user-friendly butterfly field guide ever created".  Whhhhaaat?  That surely seems bold and presumptuous!  I'd like to know whose idea it was to say that.  The author's?  Do you agree with it?  I don't.  That doesn't mean I hate the book though, I'm certainly happy to have it to reference.  Will it be my new, primary go-to guide though?  No.  Still, if you get a chance, I encourage you to flip through a copy and see what you make of it.

Disclaimer:
I received a complementary copy from the publisher for review purposes, but the viewpoint expressed in this article is entirely my own.
Posted by Cory J. Gregory at 4/18/2018 08:48:00 AM