Turkey Vultures.  You know those... they're EVERYWHERE.  They're abundant in much of the US, they eat dead things, they hiss, and, if they're scared, they hack up past meals of rotting flesh mixed with their strong stomach acid.  People even call them "buzzards" (even though that's incorrect... they're not buzzards).

Given all those things... do you reckon they're all that interesting?  I'd hope by the end of this post you might reconsider your "Eww, no" answer.

This tale starts earlier this month when Ashley and I were doing some birding near Mark Twain Lake when we found ourselves trucking down a random backroad.  On the right was a big, metal barn.  On top of this barn were a whole bunch of vultures lined up, some with their wings outstretched; they do this to a) warm up, b) dry off, or c) cool down.  It all depends on if they're cold, hot, or wet.

No big deal though... vultures like to perch on dead trees, roofs, etc.  However, I did a double-take as I passed... was that a tagged one?  I decided to stop and back up to get a closer look.  YES, it WAS tagged.  I grabbed my camera and here's the result: 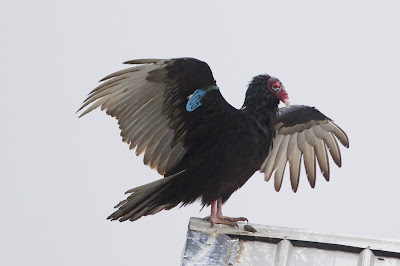 Yep, that's a Turkey Vulture alright... and yes, it's wearing a blue wingtag on its right wing.  You can even see the "106" printed in black.  Although I was intrigued by this, it didn't really tell me anything other than that this bird had been captured and tagged by humans at some point in the past.

So when we got home, we did some digging.  Before too long, we found the name of Dave Barber at Hawk Mountain Sanctuary and suspected he knew something about this.  Sure enough, we got an email back stating a couple pretty cool facts about #106:

* This vulture was tagged on 18 December 2008 and had not been seen since that date.
* It was tagged in Maracaibo, Venezuela!  That's 2,075 miles from where we resighted it.


So that's pretty wild!  Of course, this bird has migrated to South America and back probably every year since 2008 (and maybe for years before that?).  That's a LOT of miles to cover!

Anyway, I really enjoy being on this end of bird resighting and thought I'd pass along the story.  I imagine it's a thrill to be the researcher and to receive a picture of one of "your" birds like this 9 years later.
Posted by Cory J. Gregory at 10/24/2017 07:25:00 PM