How do you know so much about swallows??

Being back in Missouri has some perks.  For example, the fall weather lately has been phenomenal.  Highs in the 70s... it's just plain pleasant!

Ashley and I like to hike around the property to see what's around and although we're not expecting the diversity of migrants that we had this spring, it's still nice to be around ol' familiar winter friends.  eBird is showing that I've made 6 checklists (totaling 43 species) at this location since we returned in mid-October.  Here's a quick run down of those:

Not all the highlights are birds either.  For example, here's a WHITE-TAILED DEER; an 8-pointer buck: 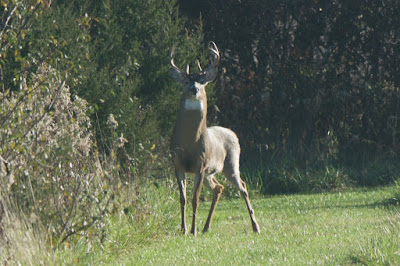 Just today we returned to Steyermark Woods Conservation Area near Hannibal.  The woods were quiet, MUCH quieter than when we visited in the spring when all the singing warblers were around.  Instead, we mustered up a lowly 14 species before bailing ship.  You can see that checklist here.

In fact, the highlight may have been this trail sign sporting some extra flair: 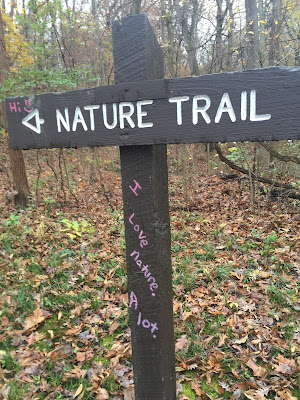 After Steyermark, we went exploring to the north.  We had absolutely nothing in mind other than to drive somewhere that had probably never been birded.  We ended up on a small county road north of town; I was curious about it considering it was one of the few that was down in the floodplain instead of up in the hills (I have noticed that most EURASIAN TREE SPARROWS dig the floodplain compared to hillier towns).  Although I wasn't THAT hopeful we'd find my county ETSP... we weren't 1/4 mile down the road before we found a flock of 11 ETSPs!  The rest of the road was pretty uneventful though.  Here's our list (and you can click "map" to see where I'm talking about).

I was happy about the ETSPs though.  You would think that we're LOADED with them here, being relatively close to St. Louis and all that.  Fact is, they're way more easy-to-find on the Illinois side of the river.  These ETSPs that we found in Marion County were about the 10th eBird record ever for the county (much of that is probably poor coverage though).

We were heading back to town via Hwy 168 when we looked up to see two BARN SWALLOWS flying over the road.  Um... woah?  We turned around and managed to find one again so that we could get a documentation pic: 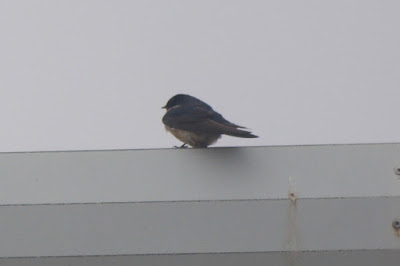 We knew it was getting late in the season for these migrants but weren't really sure HOW late.  We pulled up November eBird records from this year and what we saw was a landscape severely lacking in red pins: