This first update in two weeks is written with a heavy heart... actually, a cold heart... a cold everything, actually.  You see, I left the warmth and summer-like conditions in California, drove across the continent, and emerged in New York State where it certainly doesn't feel like spring.  Not to me, at least.

My epic 4-day drive took me through 12 states, put me in the front passenger seat of a police car in Illinois, and of course, a lot of county listing.  I'm not sure if it's the lack of other things to do as one drives across the country or my fascination with coloring in counties on my county map, but I kept track of birds I saw in essentially every county as I drove east.  All of that work was essentially for this map that I updated just now:

You'll see I missed one county in Illinois; that was due to poor planning on my behalf (I only ventured into this county under the shroud of darkness; and yes, I tried to find a HOSP in the dark when I got gas).  Other than that, you can see my route to western NY.

I didn't do a ton of birding along the way though; I was focused more on making good time.  I did snap a picture of this faded CHUKAR though; it's a shame, it looks like they've gone extinct at this particular location: 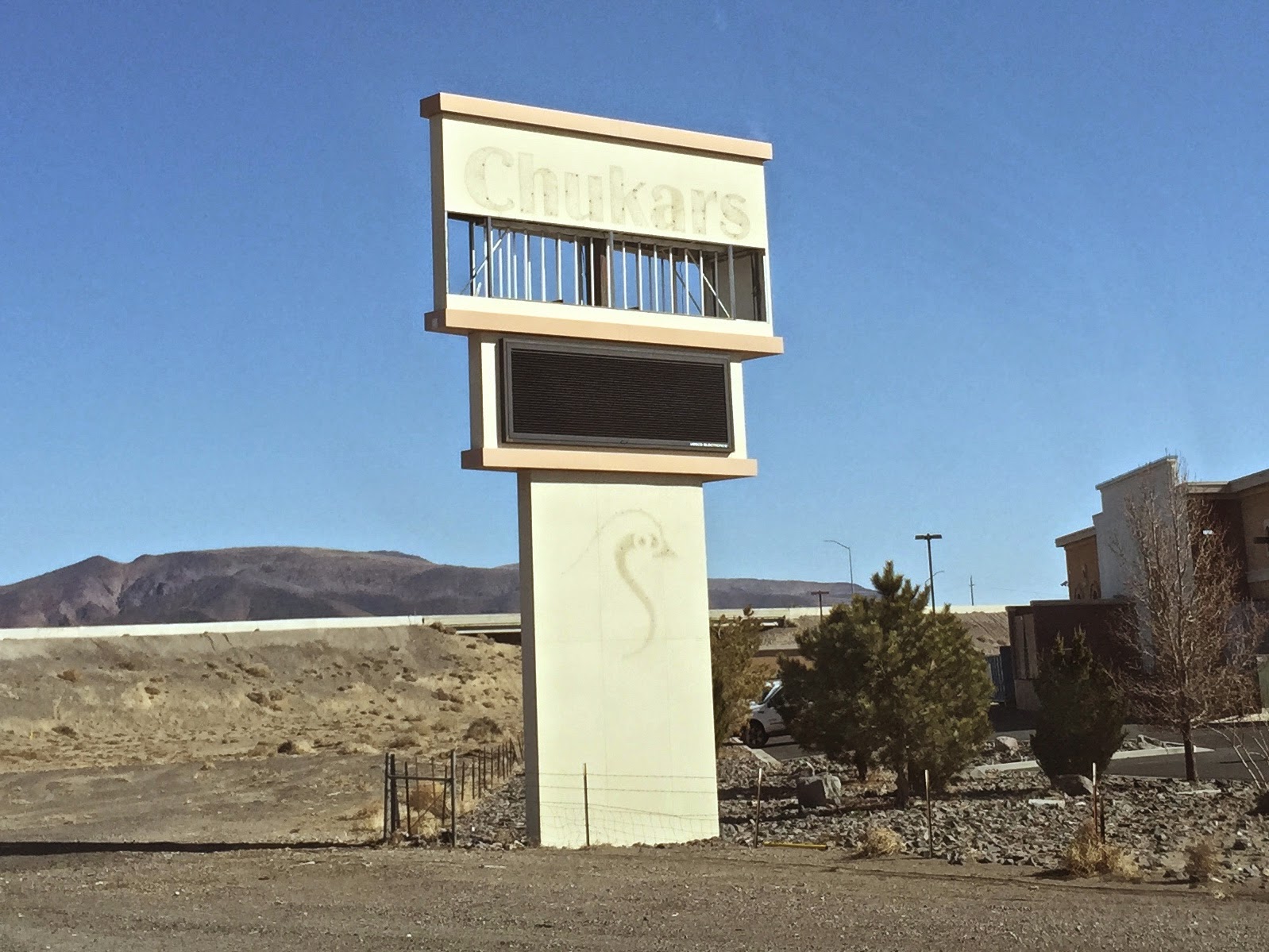 As I zoomed my way east through Nevada, pretty soon the Ruby Mountains became visible on the horizon.  I wouldn't stop for snowcock on this trip though; I was lucky to see them in 2013 and I'll be trying for them later on this spring: 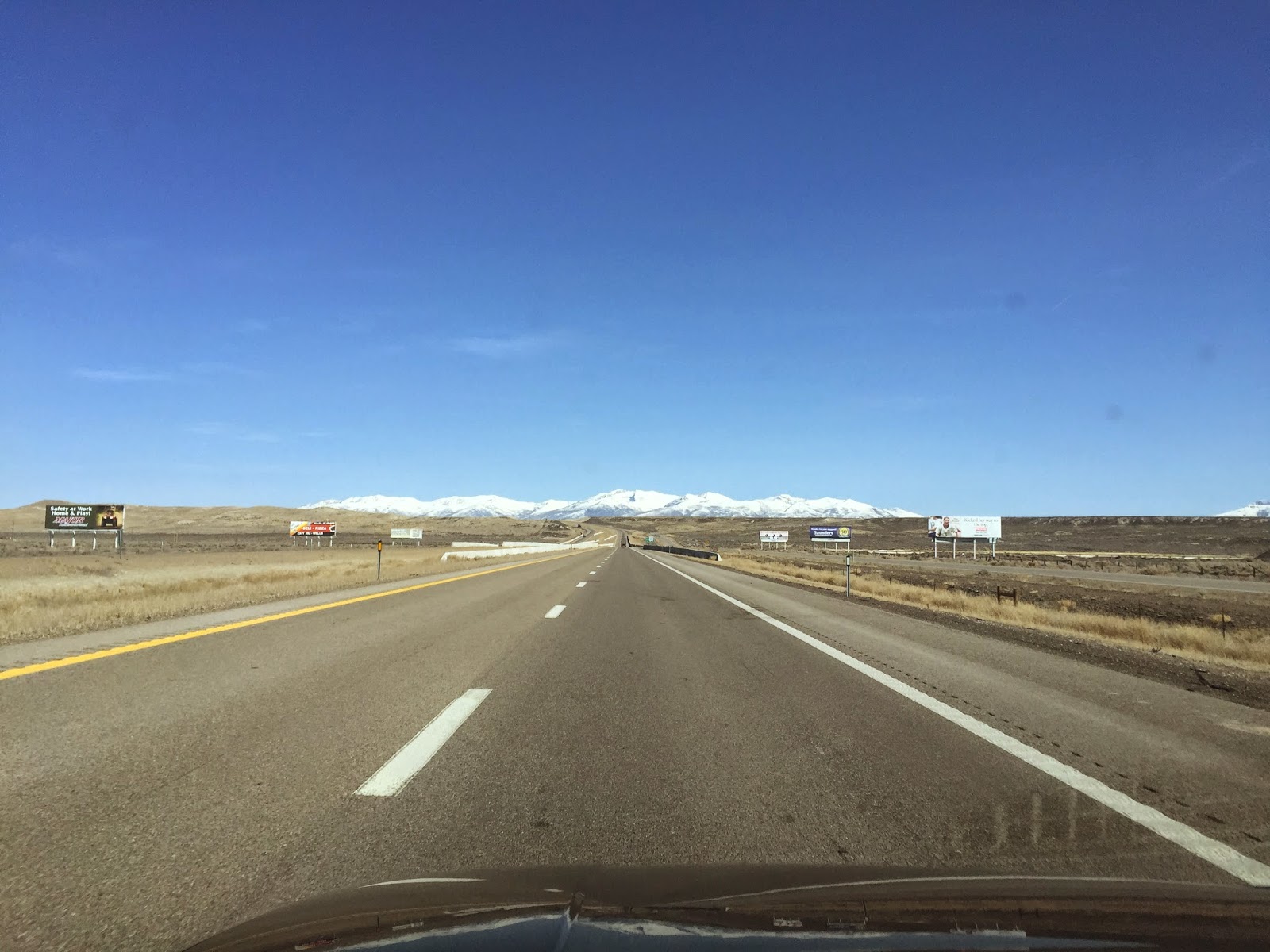 I did make one detour in Nebraska though.  I found that I could pick up 2 new counties by just driving south from the interstate for 5 miles.  I figured I needed a break and found myself looking over grasslands (and HOLA, LALO, and EUCD) in Colorado: Another stop in North Platte one morning yielded a slew of "Richardson's" CACKLING GEESE: 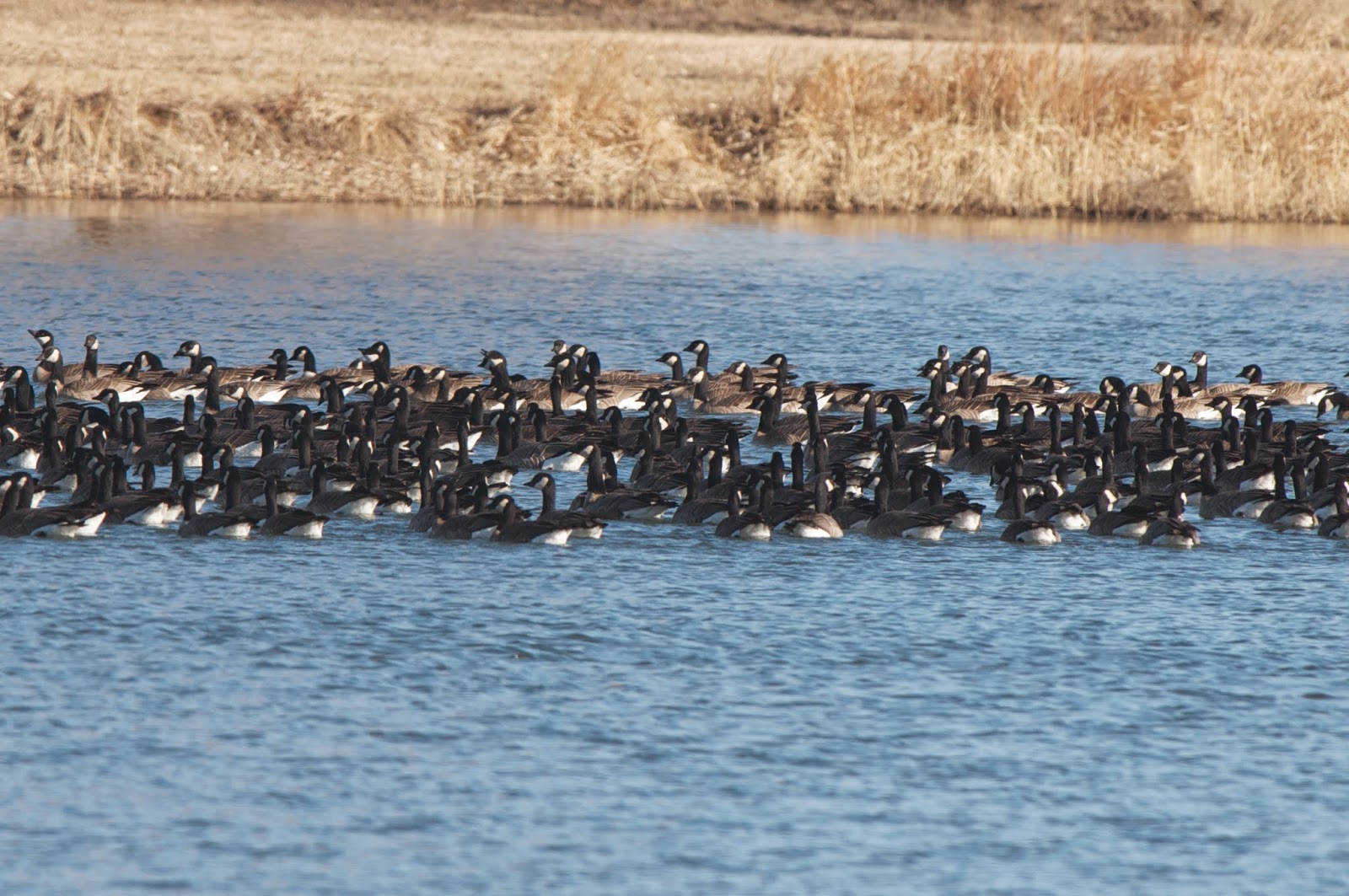 In fact, that stop yielded a lot of things that reminded me that I wasn't in the Central Valley anymore.  Here's the quick checklist.

I eventually found my way to Allegany County, New York, which is where I was born (and still have family).  Winter was waiting for me: 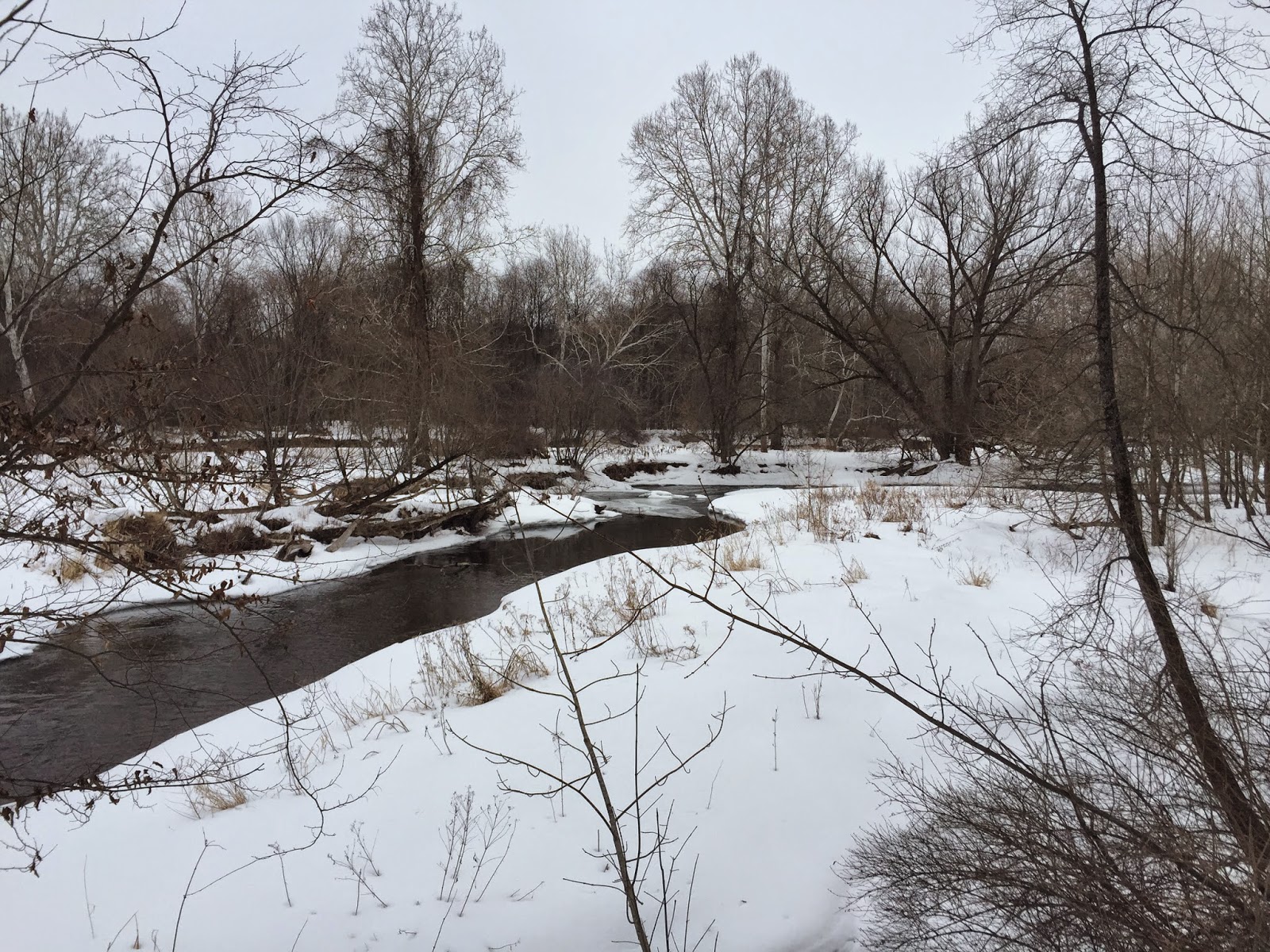 Speaking of winter though, the above landscape yielded a singing WINTER WREN which was mind-bogglingly pleasant sound.

Most of the rivers and bigger bodies of water though were still iced up.  In the few small patches I could find, COMMON MERGANSERS seemed to be a common theme.  Here's a blurry shot of one flying off... I suppose I was just shaking too much: 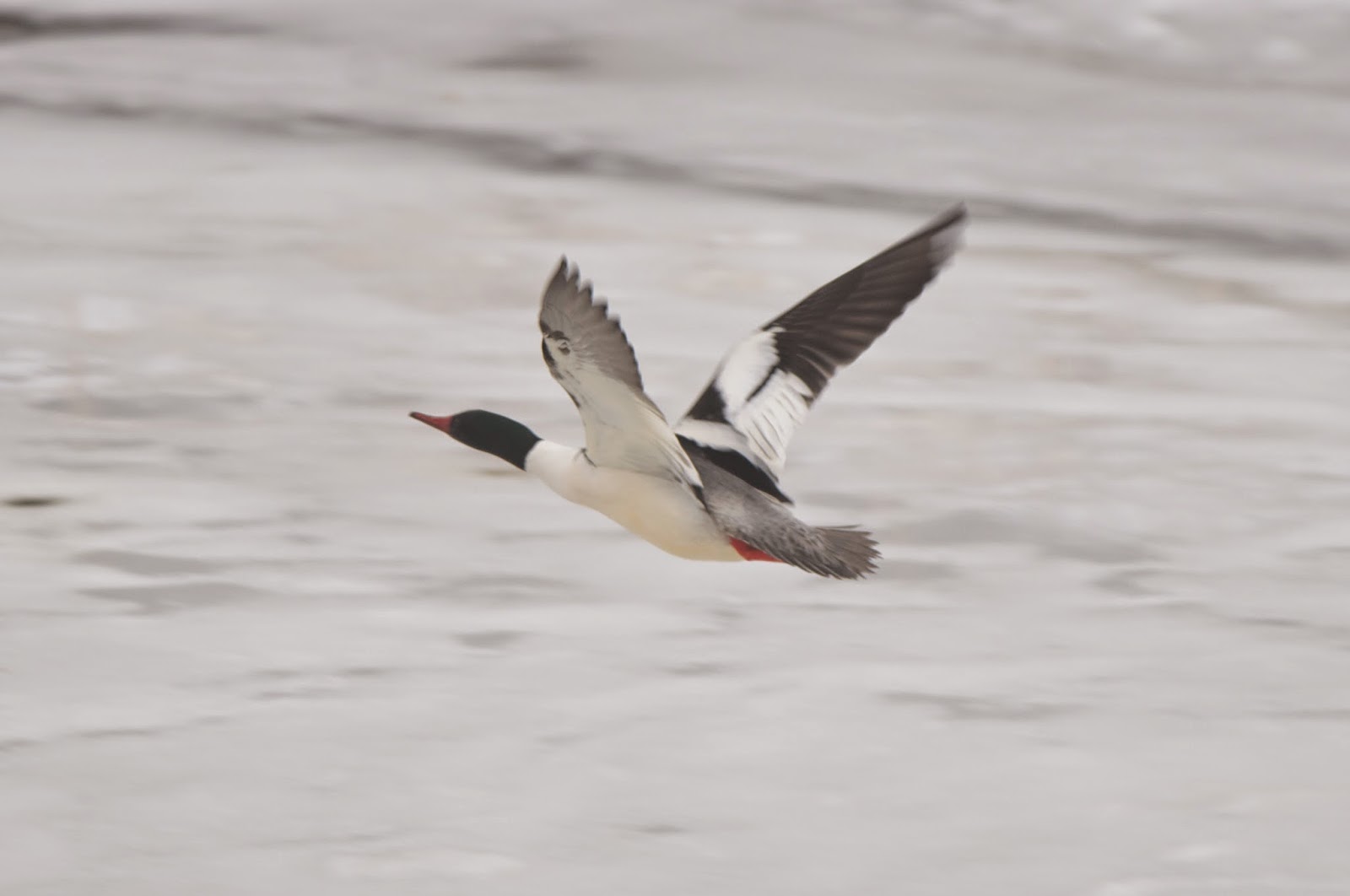 There have been signs of spring though.  The NORTHERN CARDINALS are in full song, some migrants have returned such as COMMON GRACKLES, RED-WINGED BLACKBIRDS, and this KILLDEER (which probably wasn't too keen on foraging opportunities): 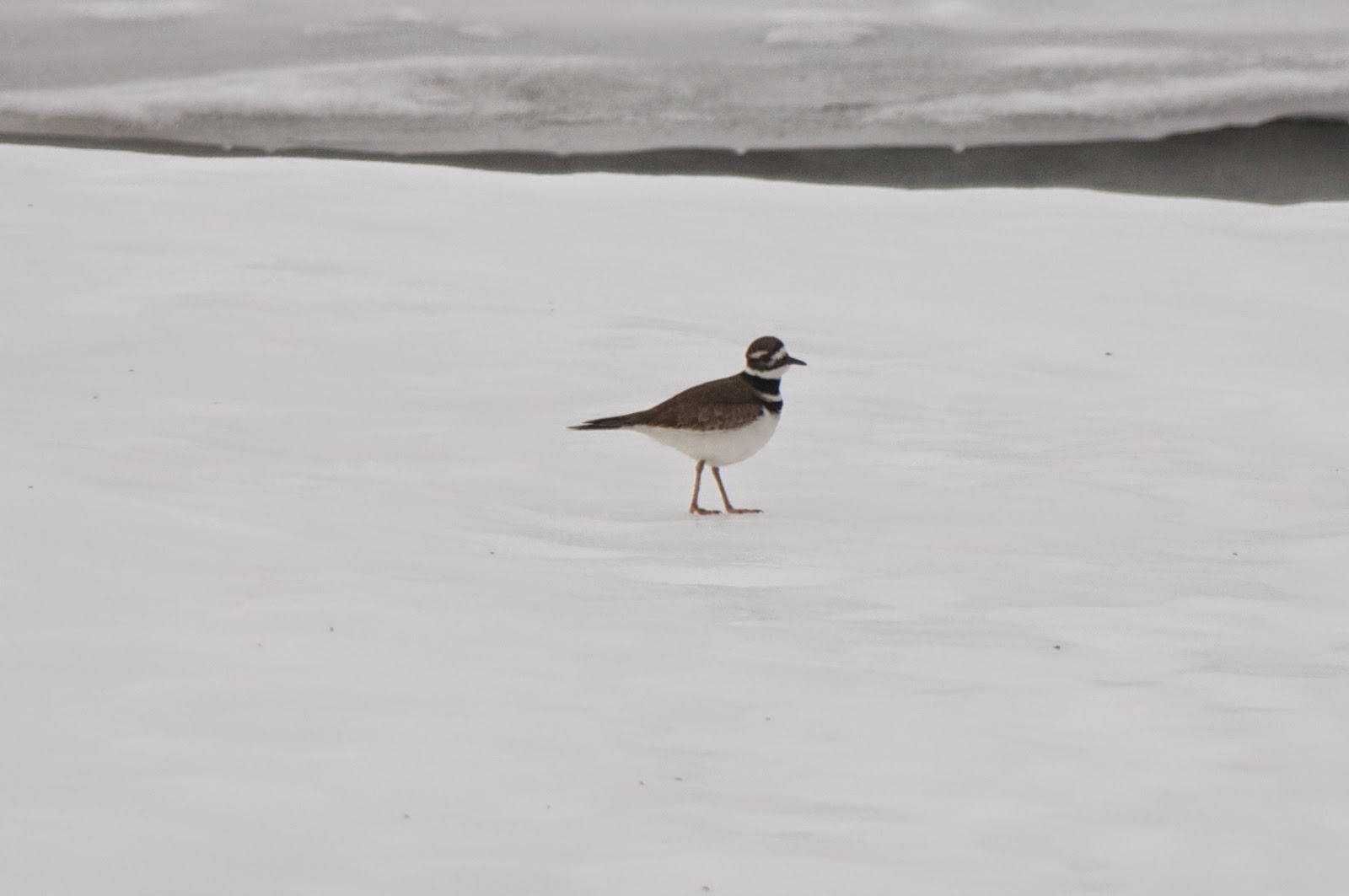 Using eBird, I looked around at what's been seen in this (dramatically under-birded) county.  I followed up on a tip and found this SNOW BUNTING on a nearby hilltop: 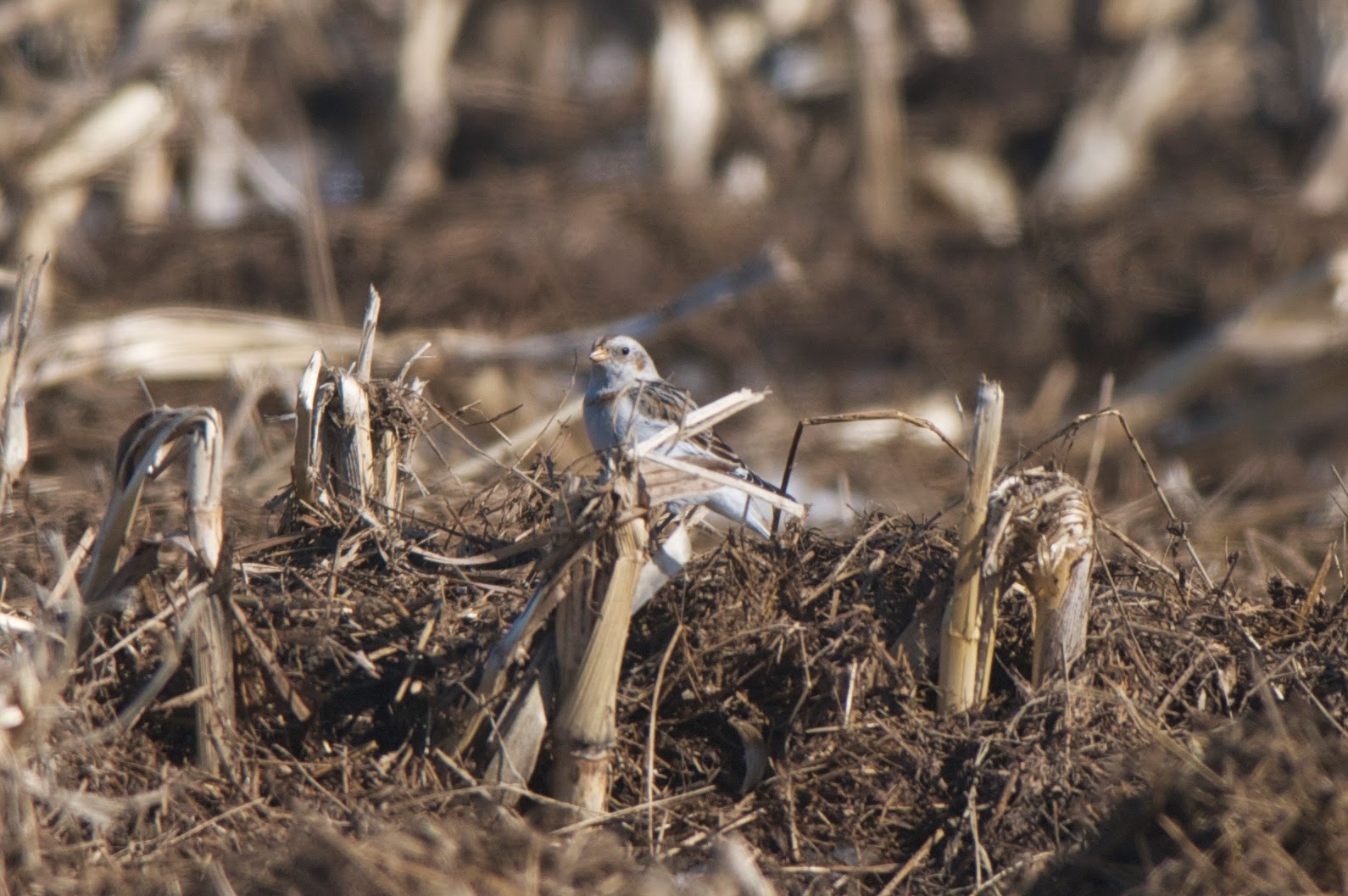 I had a pleasant surprise today when I heard the all-too-familiar honking of TUNDRA SWANS somewhere.  I glanced up and imagine that, 46 swans heading west.  I whipped out my stellar zoom lens (iPhone = no lens) and took this amazing,  publishable quality photo: 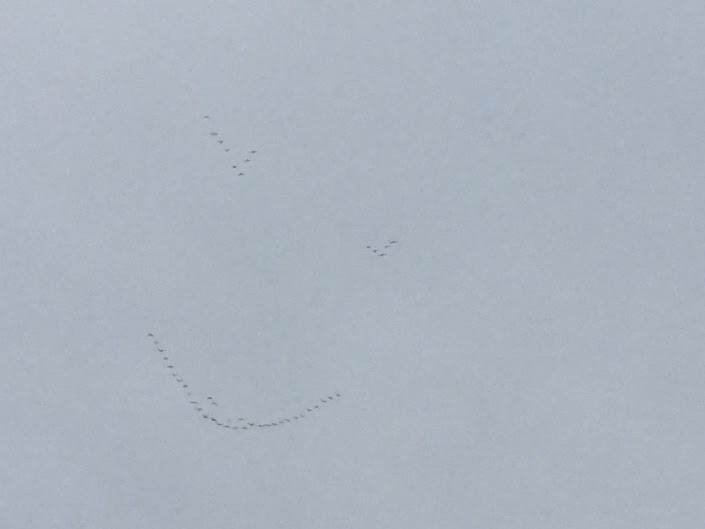 Yesterday I found myself in the next county west of us, Cattaraugus.  This county is lucky in that it holds Allegany State Park.  It's not a small park, mind you, it's about 65,000 acres.  The mix of coniferous and deciduous trees, which surely have nesting NSWOs somewhere, looked nice to my California-jaded eyes:

Equally as nice-looking were 5 RUFFED GROUSE I found while driving some backroads.  Here's one leaning down and nipping a bud off this tree: 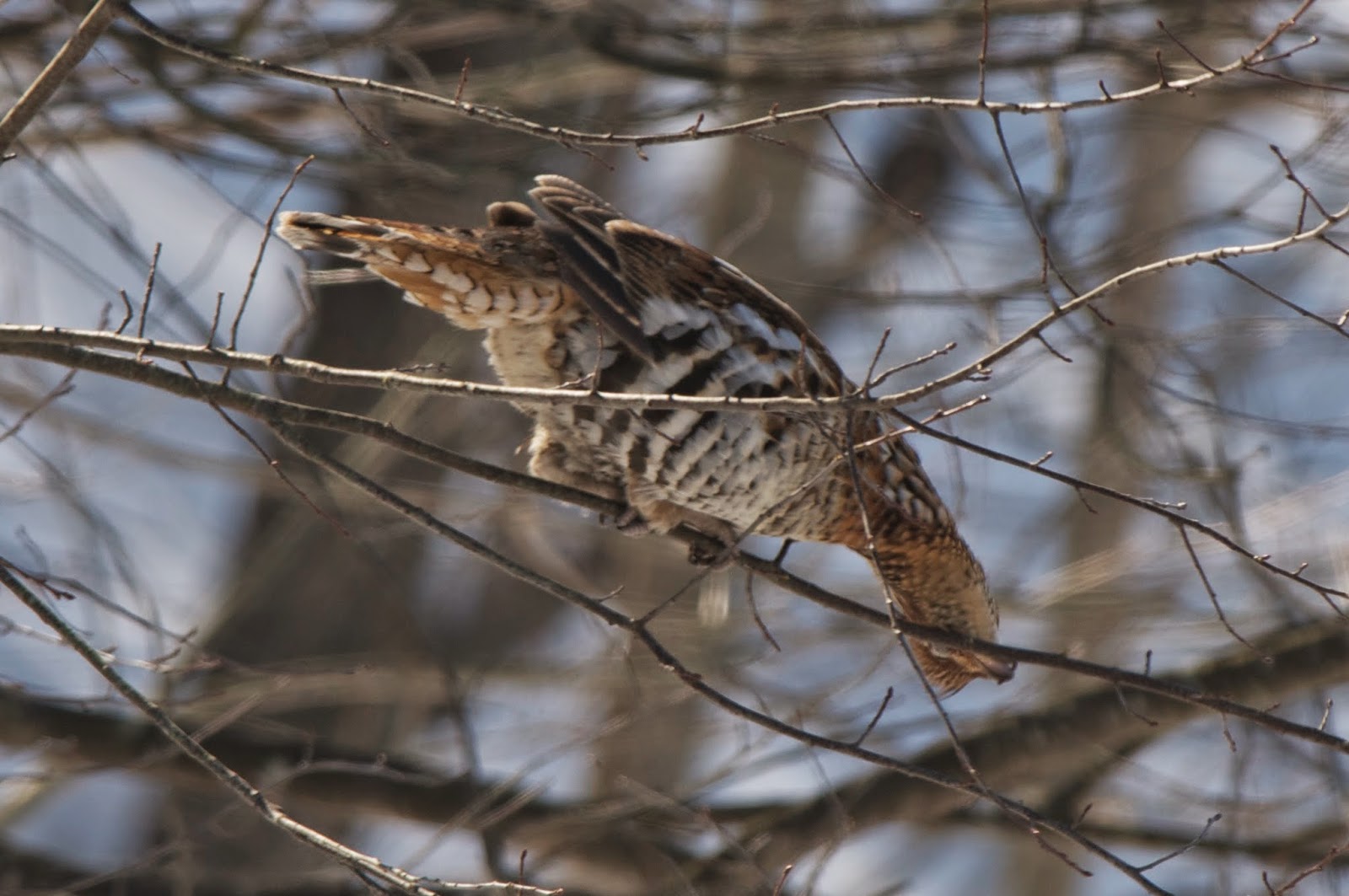 And yes, buds/twigs of birch, aspen, and willows are a main part of the diet of this species during the harsh winter months. 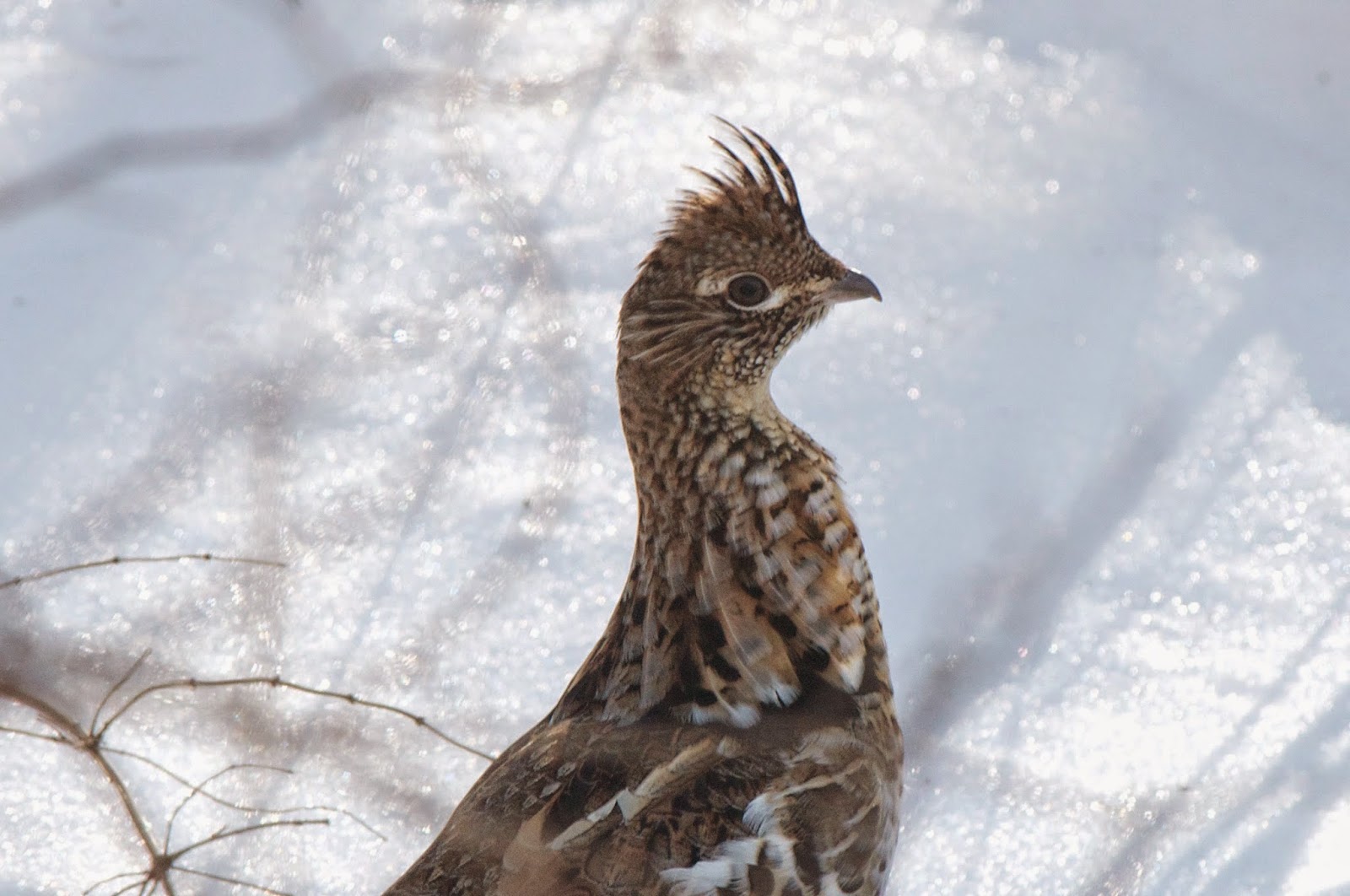 Interestingly, the popularity of this species as a game bird led to some of the earliest game management practices in the US.  For example, New York had a closed season on Ruffed Grouse in 1708!  I'll leave you with one more photo showing how this highly-intelligent bird used its renowned camouflage: 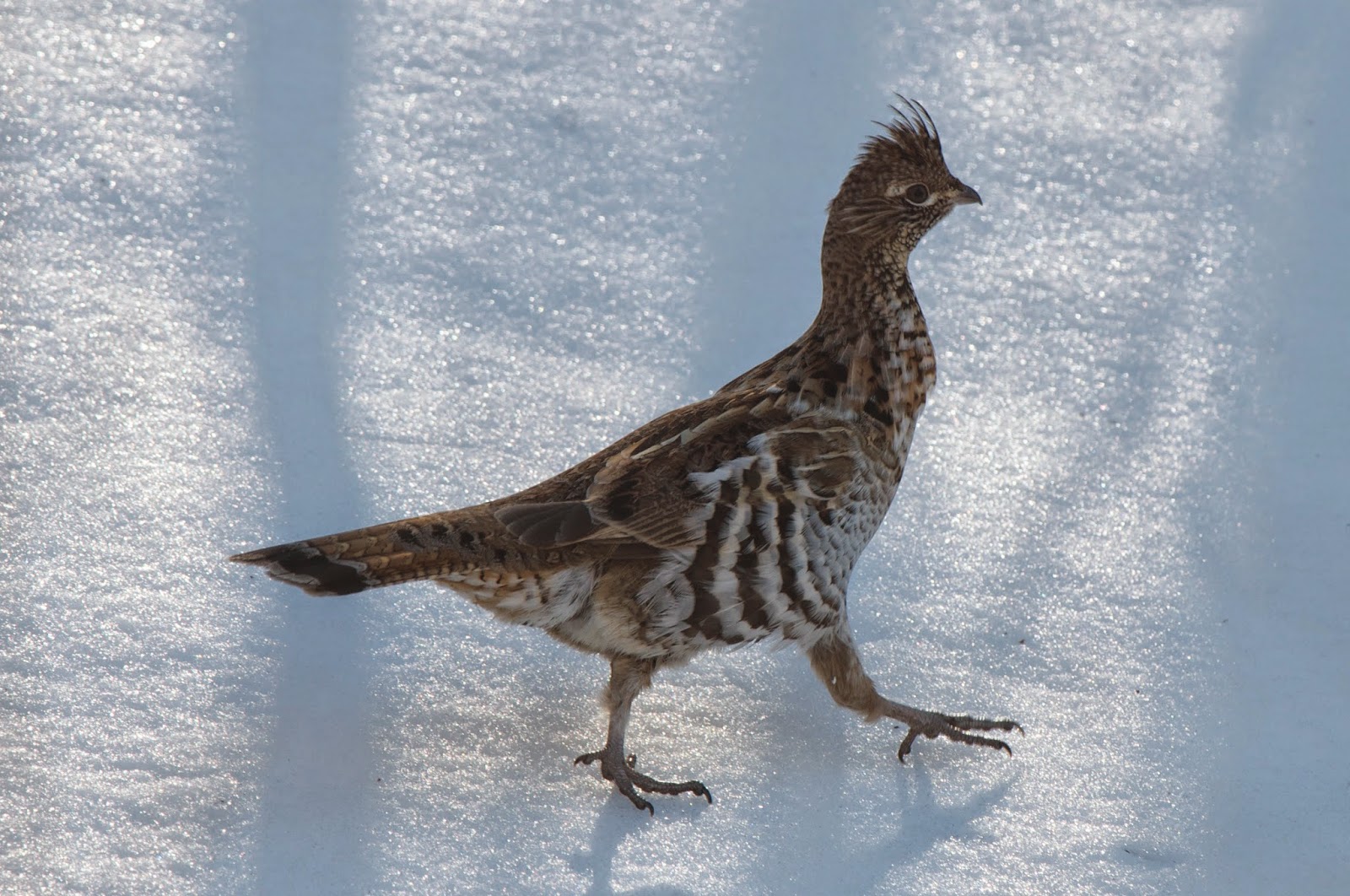