This month has been one of my worst ever for blog posts... at least in the number that I've pumped out.  I'll attribute that to the fact that I was away from home for 3 weeks.

I left off last time while I was still in western NY catching up with family and doing a little bit of exploring in nearby counties.  Although I limited myself to counties I could get to in 2 hours or less, I ended up seeing a good chunk of western NY.

One such day took me up to Lake Ontario.  After not having much to scope elsewhere, it felt great to have a big body of water to scan for a while.  Here's a panoramic view of the piers in the town of Wilson:

One of the most obvious and abundant species at this spot was LONG-TAILED DUCK; they were calling nonstop which put me in the mood for Alaska all over again.  Here's a dapper male: 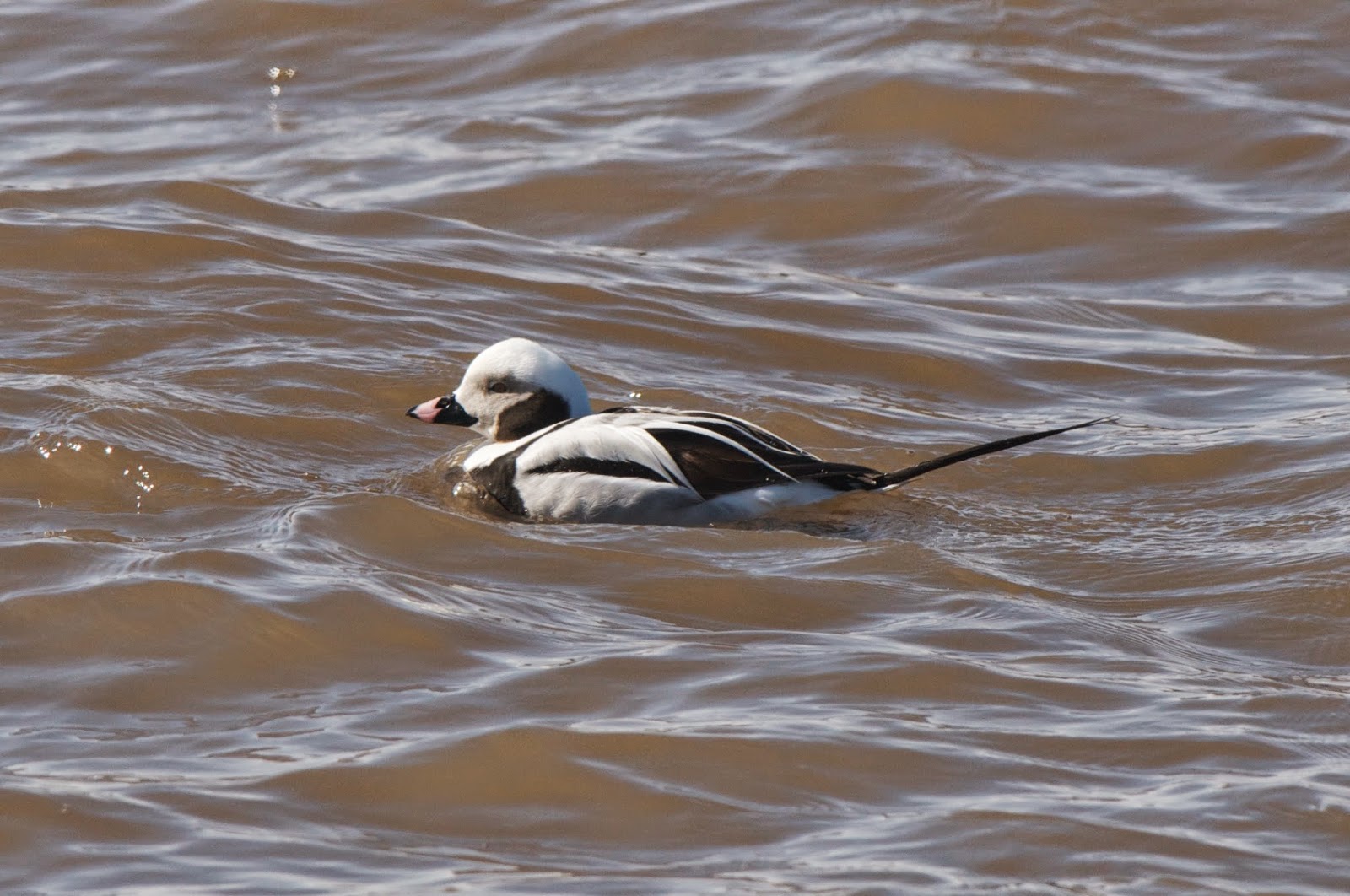 Another species that was abundant here is the WHITE-WINGED SCOTER: 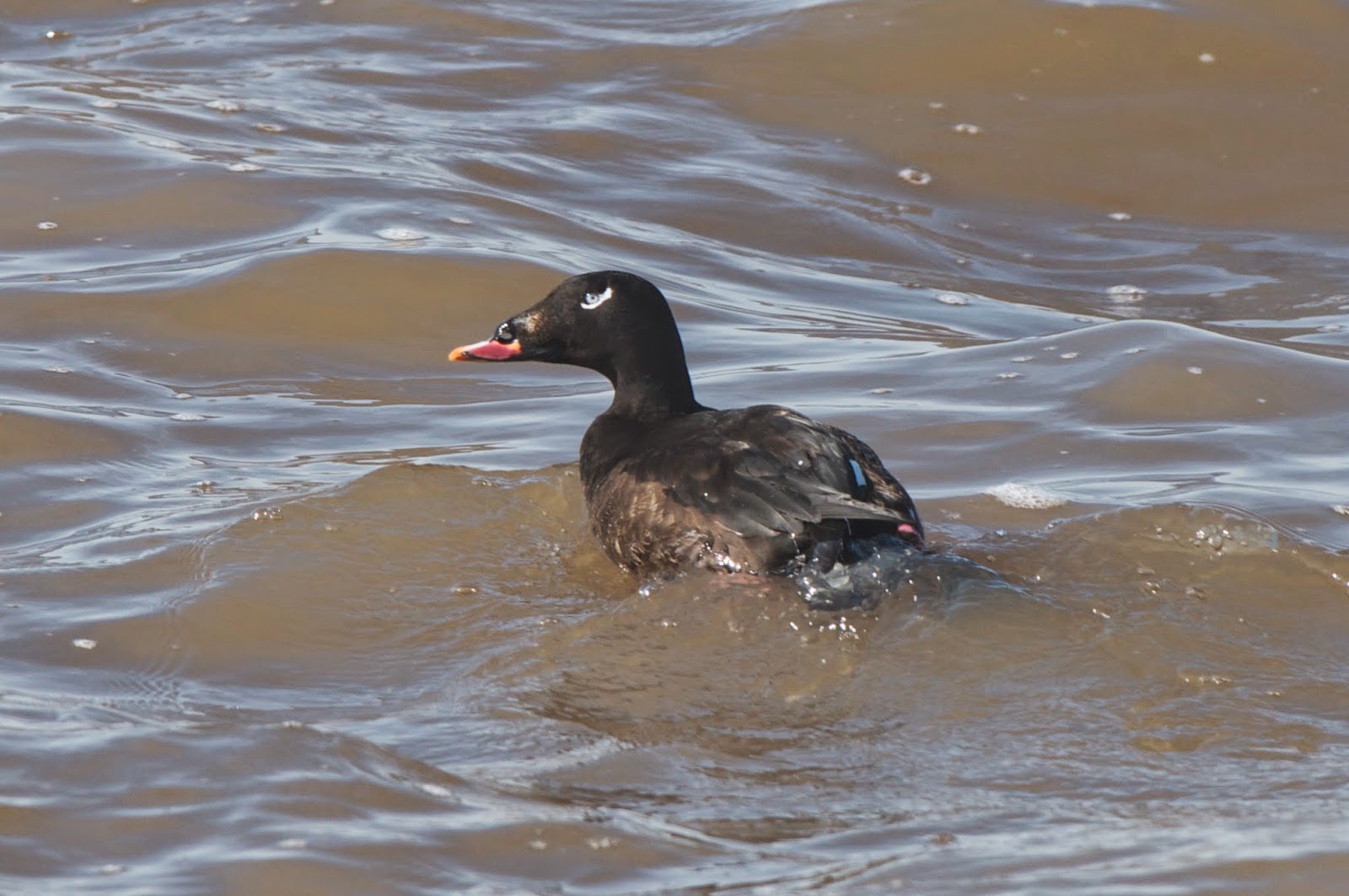 It was while I was scoping that I saw a distant city rising from the lake to the NW... it's Toronto from about 50 miles away: 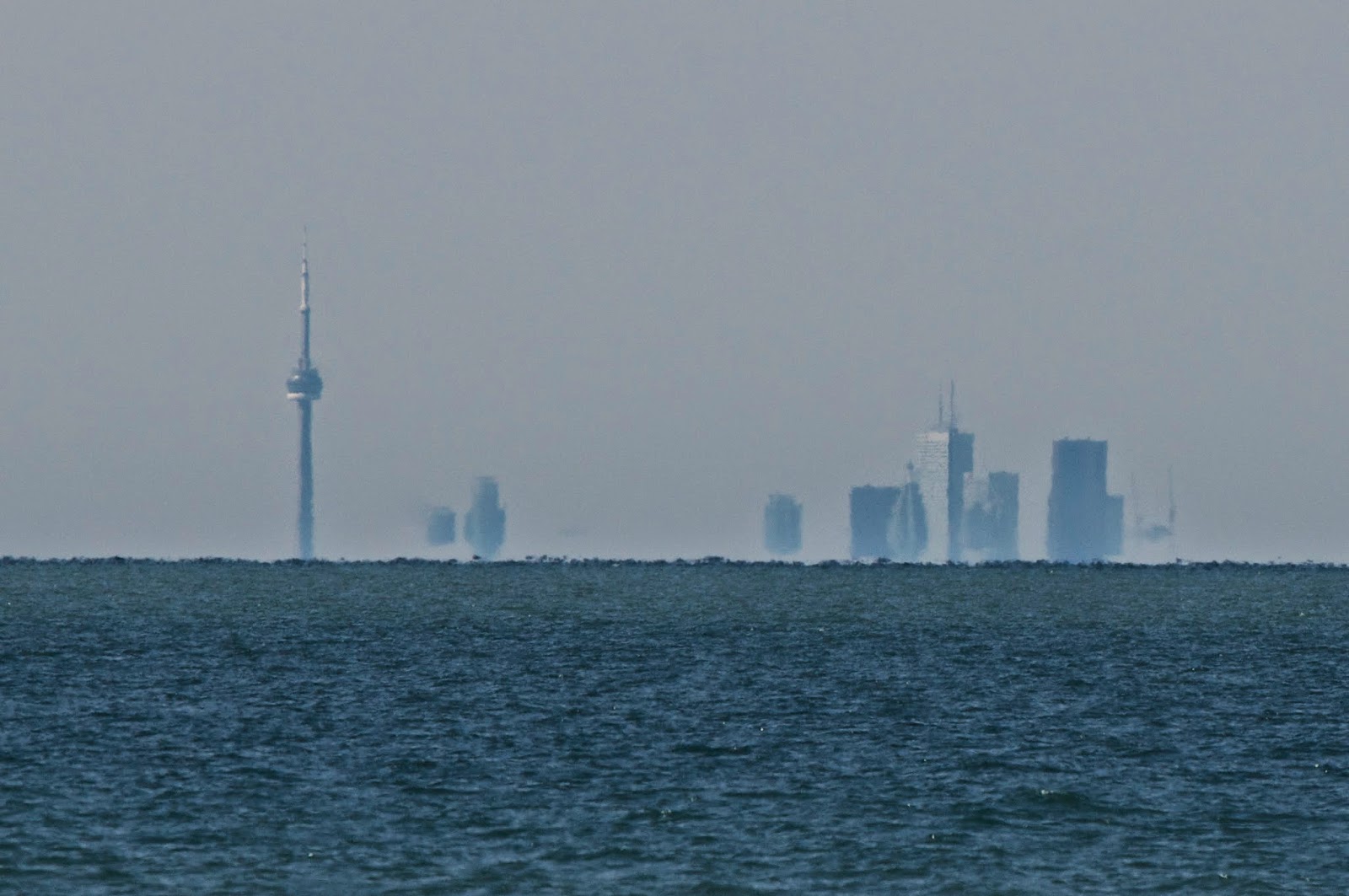 Back in Allegany County, though, birding remained slow (at least by the species diversity point of view).  I had a NORTHERN HARRIER down the road one day... turns out it was the first for the county that year, mostly likely a newly arrived migrant: 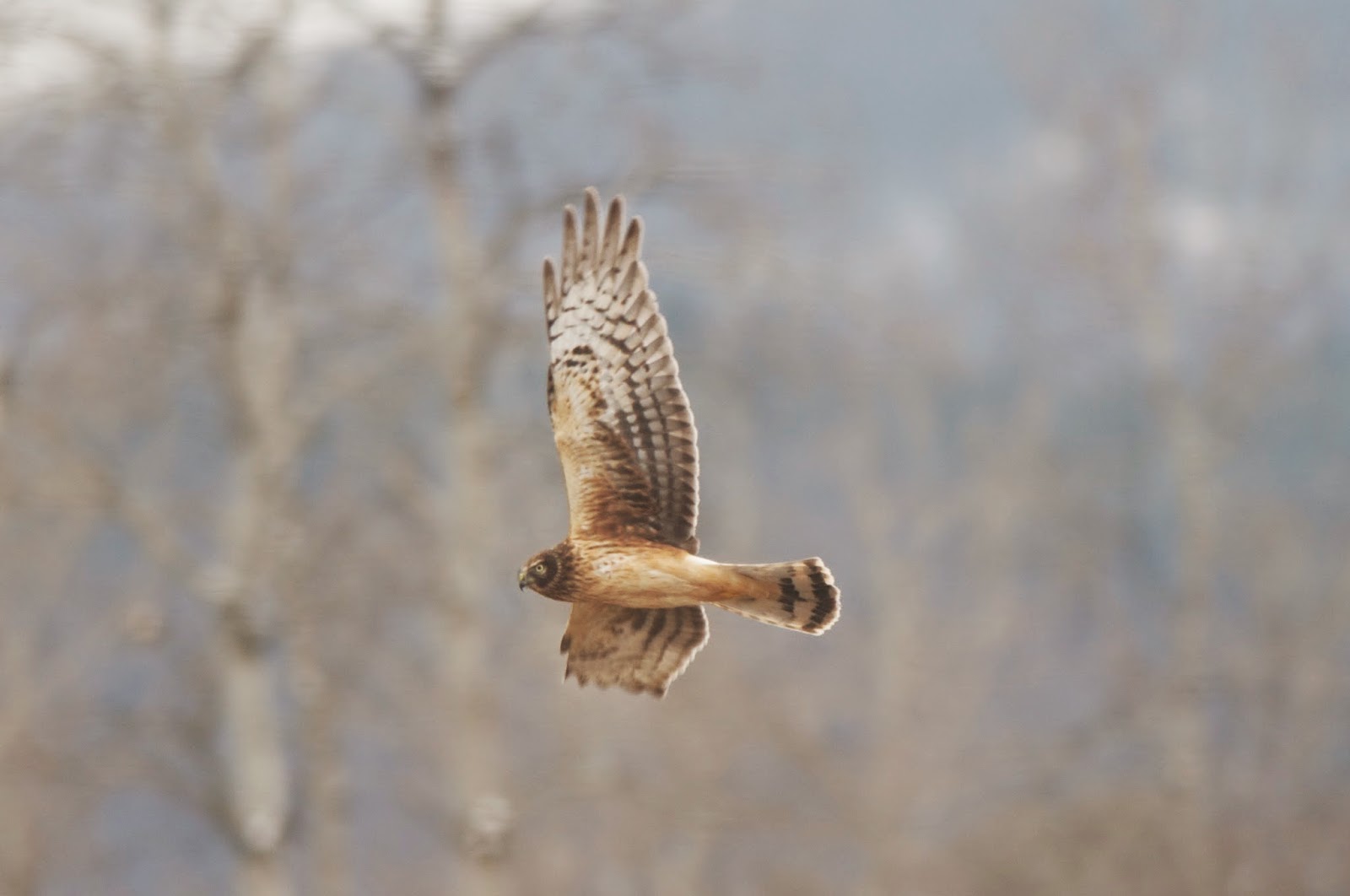 Although they're not uncommon in those parts, I was surprised to see this female PILEATED WOODPECKER at the suet feeder.  After looking at things like nuthatches and little Downy Woodpeckers, you can imagine looking out and seeing a crow-sized woodpecker instead! 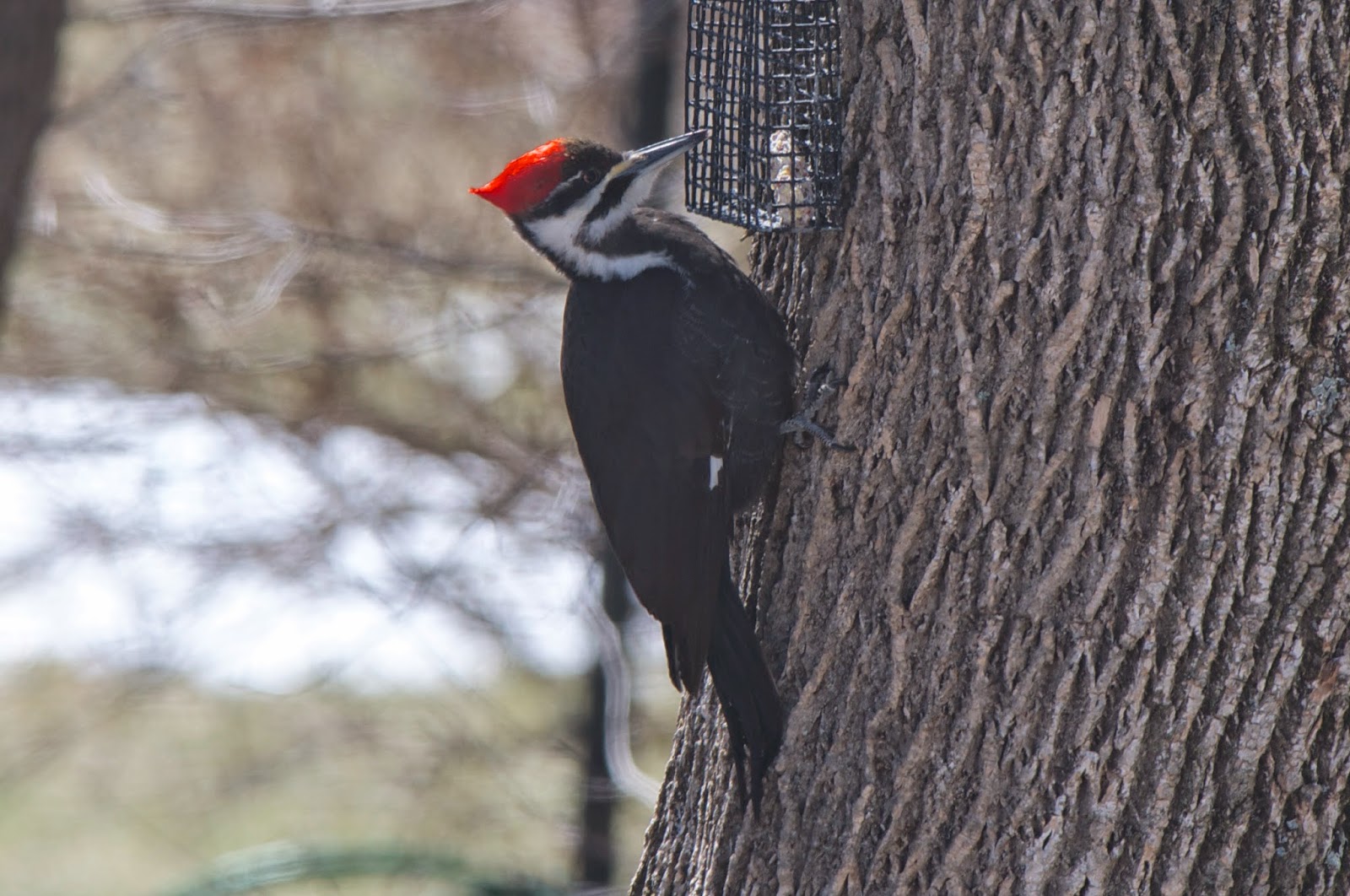 I didn't look ONLY at birds on my visit, truth be told.  For example, I was happy to see this AMERICAN MINK along the Genesee River in Wellsville: 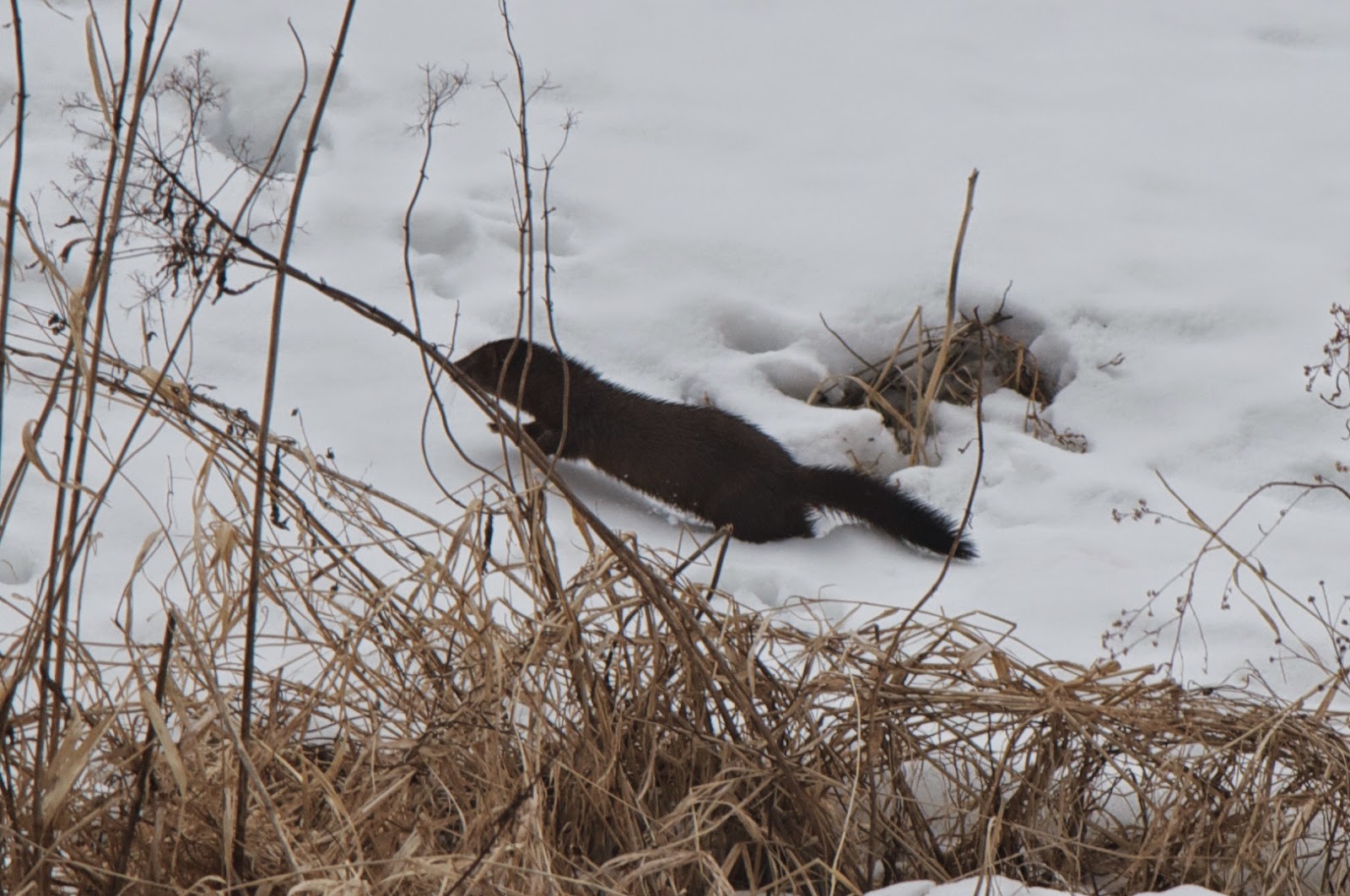 Anyway, after two weeks in western NY, it was time for me to fly back home to California (I drove to NY but will leave my car there for the summer).  Shortly after take off from Buffalo I was looking down at ice and urban development... instead of looking at it at eye level: 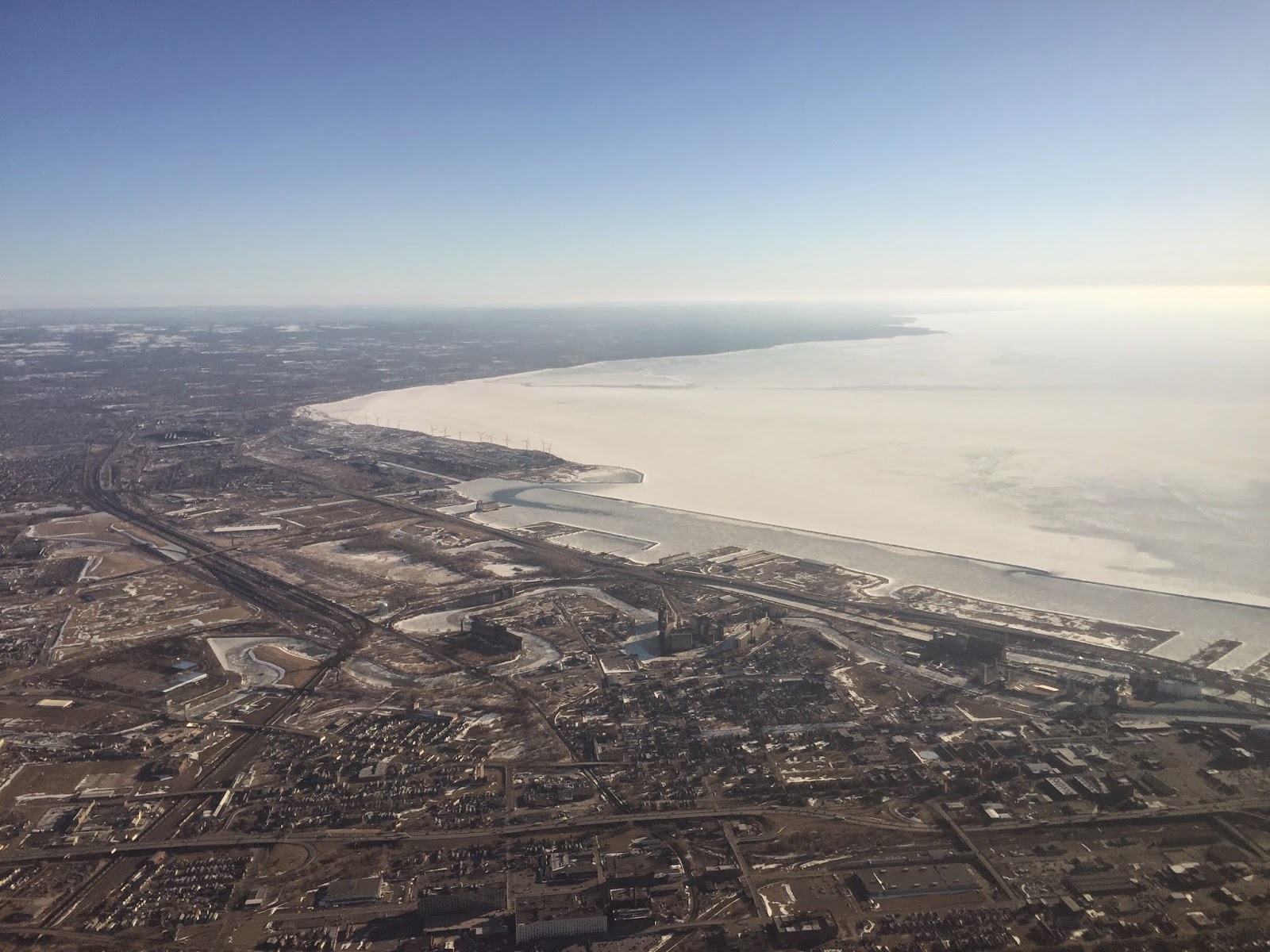 A bit farther on, you could say I reluctantly birded at Point Pelee... but at 40,000 feet elevation and at about 500 mph, I can't say I saw much.  You can see it here in the distance, the second peninsula pointing to the left (behind the first point which is Rondeau Provincial Park): 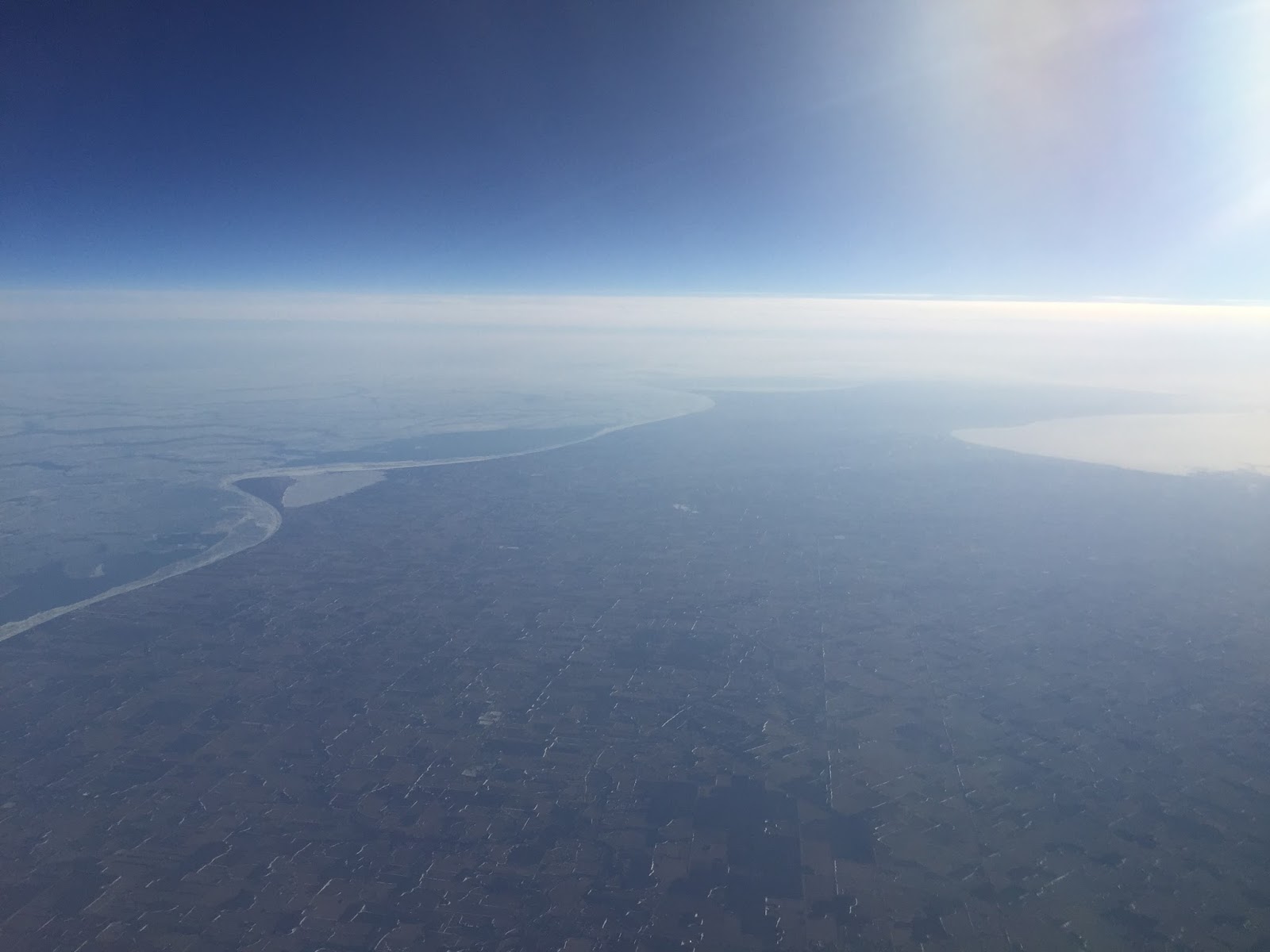 But it wasn't long before everything clouded over and the ride became a lot less interesting to someone who is fascinating by maps: 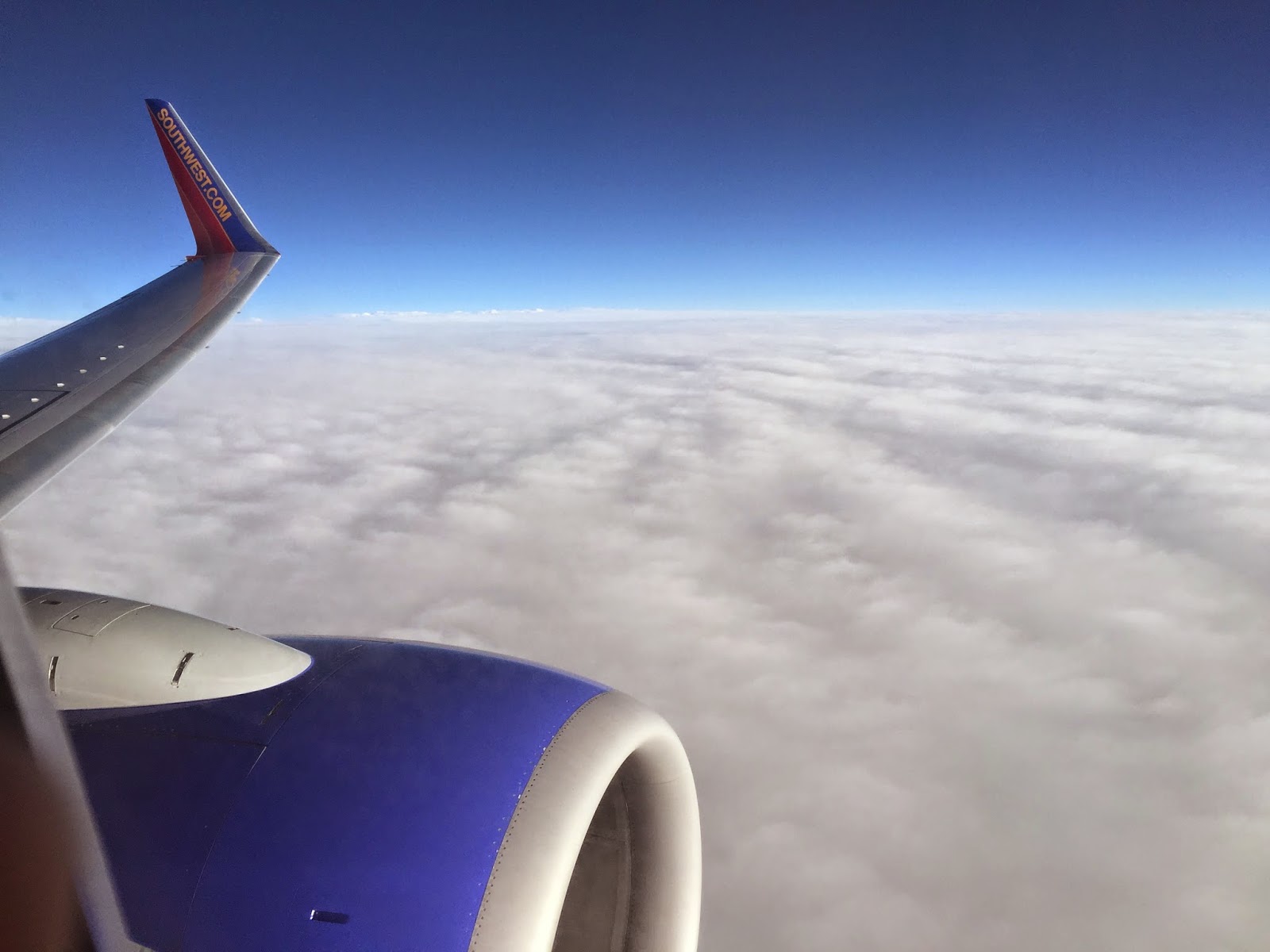 ... but hey, can I complain, especially after landing a seat with no seat in front of me?!  Talk about leg room! 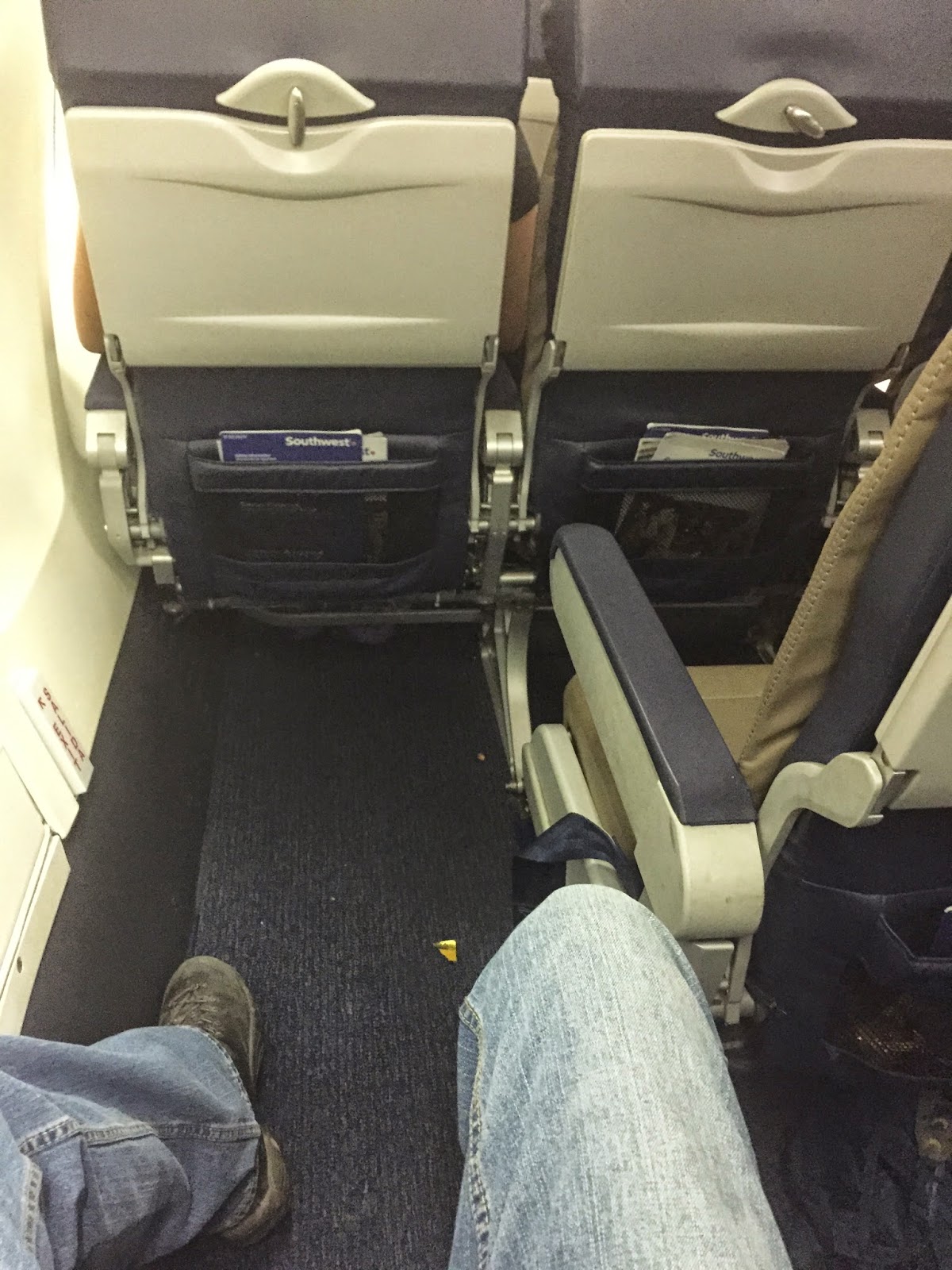