It's not too uncommon to have a couple of warbler species stick around this part of the Central Valley during the winter months.  Of course, the YELLOW-RUMPED WARBLERS are by far the most expected but sometimes you bump into species like ORANGE-CROWNED, BLACK-THROATED GRAY, or TOWNSEND'S WARBLERS.  Here's one of the latter at the City Cemetery here in Sacramento County: 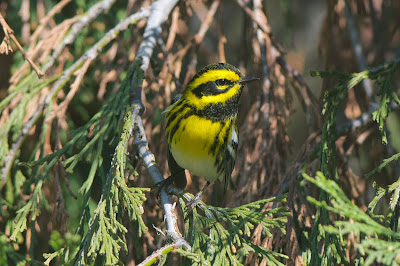 I've visited this location several times in the last month hoping for a year bird like RED-BREASTED NUTHATCH or EVENING GROSBEAK but no luck so far.

Something unusual has been happening in Sacramento County so far this fall (and it sounds like other places have seen it too).  We're going through a very notable invasion by several species that don't normally winter here.  This includes BAND-TAILED PIGEONS and STELLER'S JAYS.  Most of these sightings have occurred along the American River and finally, after a try or two, we connected with some STELLER'S JAYS at the Folsom City Park and Rodeo Grounds.  This was a county lifer for us.

We heard the distinctive call of the jays as soon as we got out of the car and we eventually traced them back into the woods between the canal/trail and the rodeo grounds.  I eventually got a clear shot of one high up in a pine: 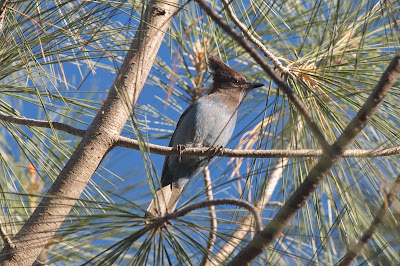 We've been seeing continuing numbers of LEWIS'S WOODPECKERS although this is less of a story than the pigeons and jays.  A late-morning visit to Latrobe Road and Michigan Bar Road in eastern Sacramento County yielded 60+ LEWIS'S WOODPECKERS including several that visited this puddle in the road: 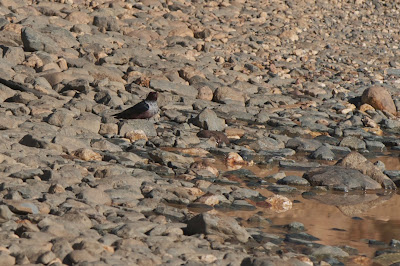 Again, Ashley made a photographic contribution; this ACORN WOODPECKER clinging to some non-wood along Latrobe Road: 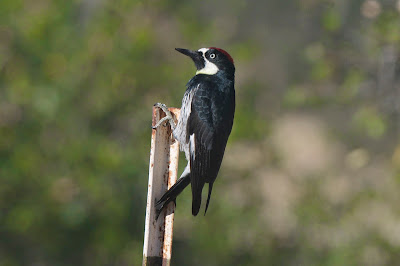 Michigan Bar Road provided a couple of other surprises.  Mainly, we lucked into a flock of 6 MOUNTAIN BLUEBIRDS up at the top of the road (3.1 miles north of the highway).  This is a pretty uncommon species here in Sacramento County but many winters see a report or two.  Here's a photo showing 4 of the 6: 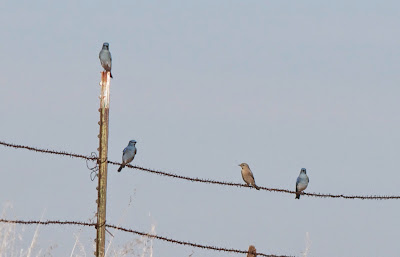 Not all that unexpected given their invasion status, we bumped into two more STELLER'S JAYS along this road.  But because it was flagged, I tried for photos anyway (and only managed a terrible backlit photo): 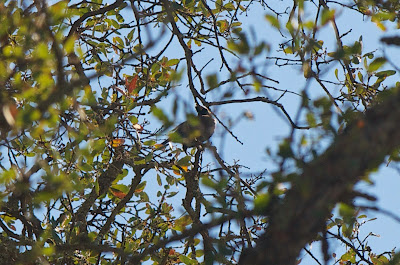 For some reason, I've gotten closer to HORNED LARKS in this part of the county than maybe anywhere else in the world.  Here's one perched tamely; from the looks of it, it might be one of the rubea birds that breeds here in the Central Valley: 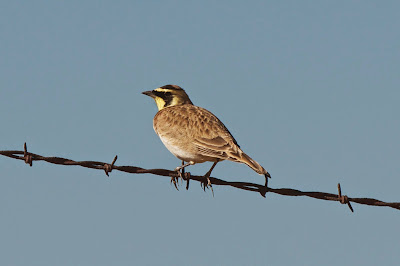 Switching gears and location, this might look like an art piece but it's an actual photo Ash took at the Monterey Bay Aquarium: 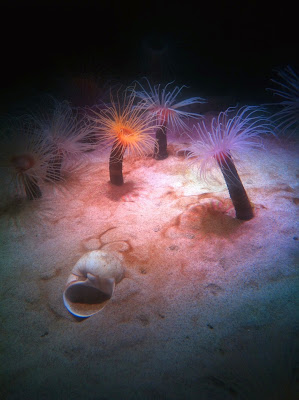 Yes, we were in Monterey and so, naturally, we stopped at Point Pinos for a quick 40 minutes of seawatching.  Highlights included 1200 BLACK-VENTED SHEARWATERS, a treat considering I'd only seen this species 3 times prior.  You can see that checklist here.
Posted by Cory J. Gregory at 11/12/2014 11:01:00 AM