I think I have a good excuse for not having updated my blog in the last month.  Simply put, there is TOO MUCH going on.  Or rather, I've been traveling too much.  Yeah, that's it.

I see I haven't posted anything since early June and even that post was highlighting some aspects of my work in Georgia the month before.  That job ended more than a MONTH AGO.  Get with the program, Cory.

In hoping to catch up someday, I'm going to start glossing over a lot of things.  This post will highlight some sightings we had in Florida for the week following my GA work.

Basically we started from the airport.  From there, we made a beeline to Flamingo in the Everglades National Park to relocate some of the SHINY COWBIRDS for Ash.  Like last time, it worked out pretty well.  Here's one: 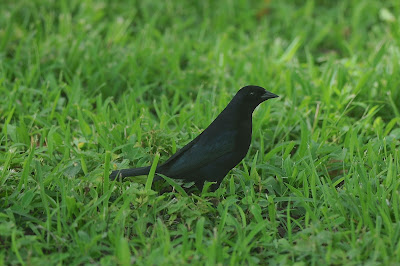 There's not too much to add about these guys.  GRAY KINGBIRDS were abundant and they soon became less interesting (sadly so).  They were outside the hotel, they were above the Subway, they were lining the wires going down the keys, they were calling everywhere, etc.  Yeah, that's GRAK for you: 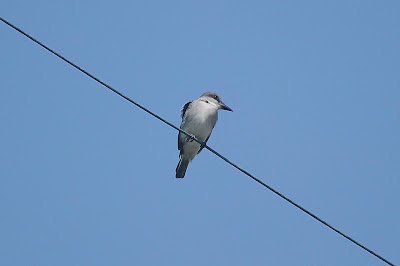 We stopped in Marathon at the Government Center, like many birders do, to gawk at the breeding LEAST TERNS: 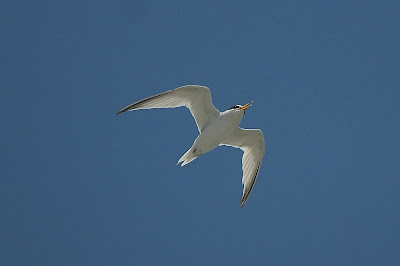 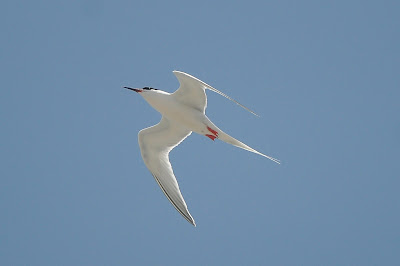 We had only seen BLACK-WHISKERED VIREOS once before in my life so we figured it was worth the time to put some effort into seeing them again.  It took a spot or two but we eventually found some: 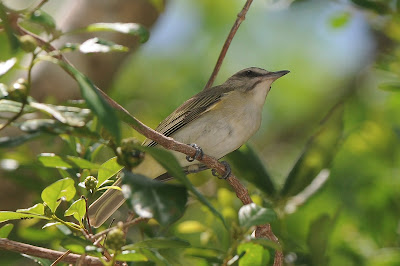 WHITE-CROWNED PIGEONS were straight-up abundant.  We probably saw 200+ on our visit to southern Florida.  Here's one: 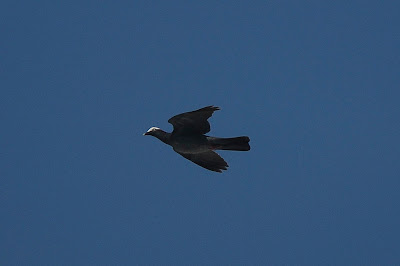 A highlight for both of us on this particular Florida trip was our visit to the Dry Tortugas.  In fact, we camped there a night.  Here is Fort Jefferson as we arrived: 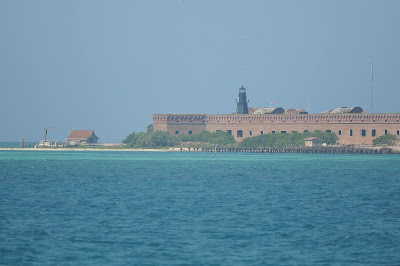 Here's the view from the top looking down at the moat.  Pretty vivid colors! 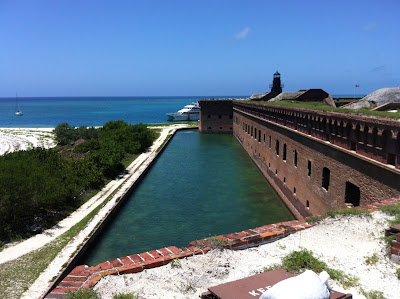 The biggest highlight for me however was finding a BLACK NODDY, which you can see below mixed in with all the BROWN NODDIES: 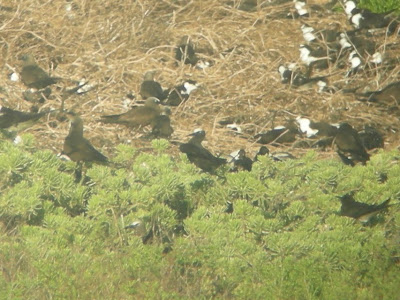 Speaking of BROWN NODDIES, yeah, they were abundant and tame: 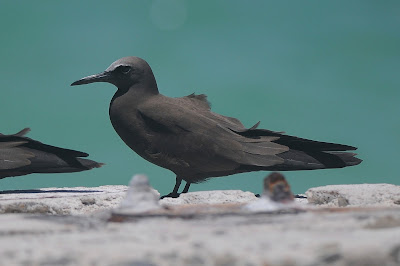 BROWN BOOBIES were less common and less tame.  I think this is the best photo I got of one on this trip: 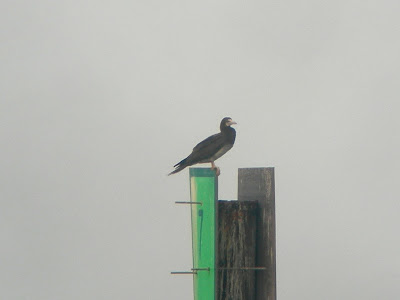 SOOTY TERNS were abundant as well: 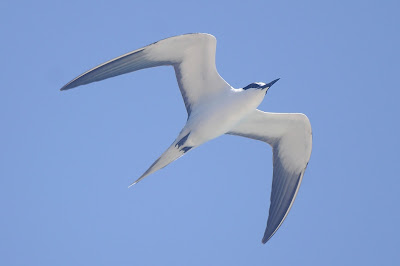 Here's the look down at Bush Key, the one with all the bushes on it: 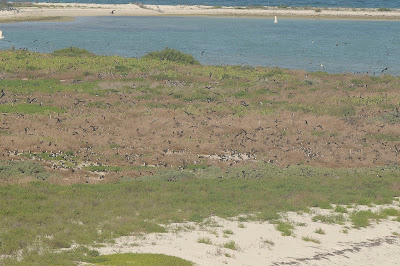 One of the rarest things we found, ironically enough, was this out-of-season WHITE-RUMPED SANDPIPER: 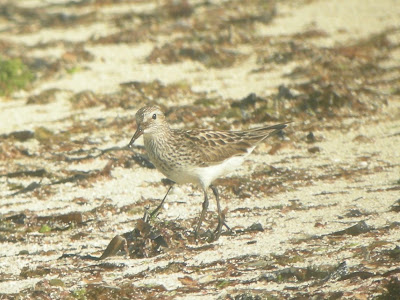 About at the top of the list of birds I wasn't expecting to find wandering around the beach at dawn was this COMMON GALLINULE: 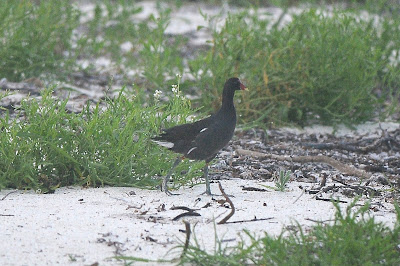 Have I mentioned the MASKED BOOBIES?  Yeah, those were visible from the fort... barely: 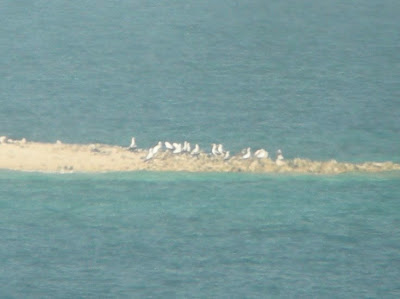 Another cool sighting inside of the fort was this "Antillean" race SHORT-EARED OWL that surfaced late that afternoon: 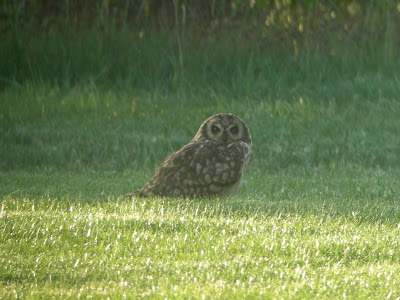 We made it back to mainland (and without me getting sick on the boat!) and it was time to finally track down the now-countable PURPLE SWAMPHEN.  We eventually managed to find a couple after having to try a few different spots.  Here's a pic of one dropping into some reeds: 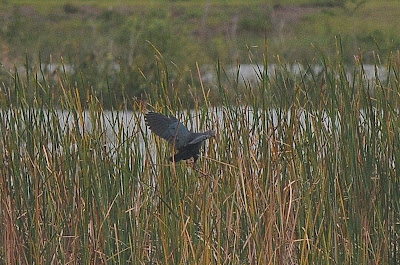 We had a little bit of time to waste so we figured it might be worth driving around in Kendall.  This turned out to be the RIGHT move.  Continuing on my good streak with RED-WHISKERED BULBULS, we found them yet again: 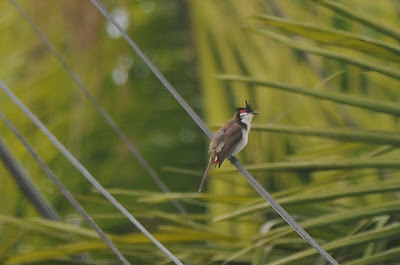 What we WEREN'T expecting was this.  Ash casually mentioned "There's a bright oriole over there".  Wait, what?!  Indeed.  A SPOT-BREASTED ORIOLE, only the second one we've ever seen: 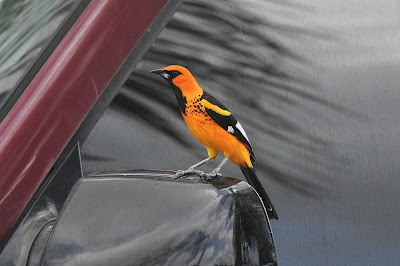 So that's the VERY quick and dirty photographic tour of some of the Florida birds we saw.  Stay tuned for some pics of my drive up through Georgia, up to New York, out to Michigan, down to Texas, etc. etc. etc.
Posted by Cory J. Gregory at 7/18/2013 10:07:00 PM