Time is flying by here in the Central Valley.  In fact, it looks like it's been 1-2 weeks since I last updated my blog.  Time to fix that....

Because I'm in the valley most of the week now, most of my birding excursions happen on the weekends.  One example excursion was up to Folsom Lake in Placer County.  Although I didn't find any jaegers or odd gulls, it was nice to find a big body of water to scan.  It provided grebes though, no doubt of that.  We had:
Clark's
Western
Pied-billed
Eared
Horned
In one of the parking lots was a NUTTAL'S WOODPECKER in a sycamore: 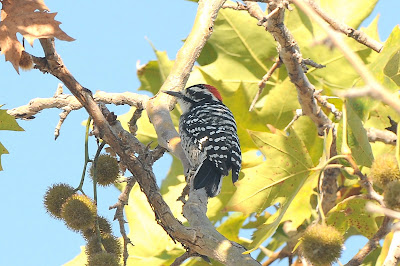 ... along with the common OAK TITMICE: 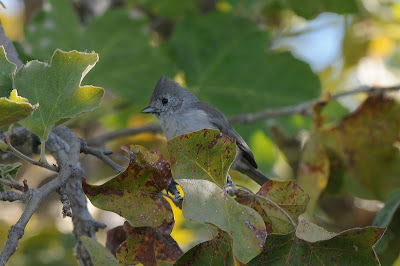 I was at Yolo Bypass Wildlife Area just west of Sacramento early one morning for work.  I couldn't pass up this eerie opportunity: 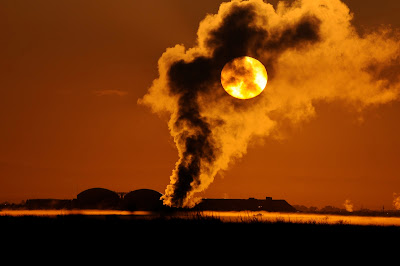 It was a dewy morning; here is a plant with some wet spider webs: 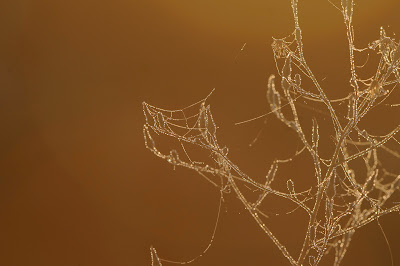 AMERICAN BITTERNS are quite common at Yolo, I'm gathering.  I've seen multiple AMBIs each of my visits there and they actually stay year round.  Here is one sticking it's head up above the field: 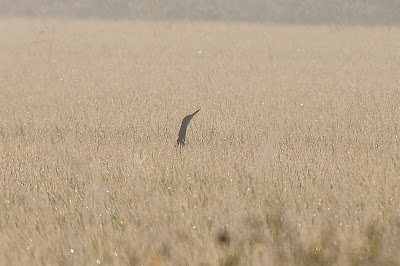 The highlights from Yolo that morning was a swarm of swallows that I scanned through for a couple of minutes.  It was fun trying to photograph swallows in flight although it resulted in a hundred blurred photos.  A couple turned out; here is a VIOLET-GREEN SWALLOW: 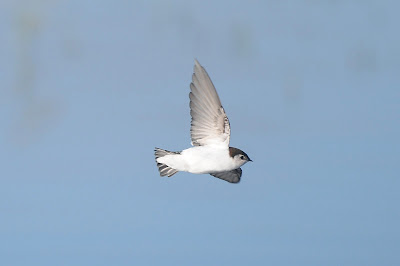 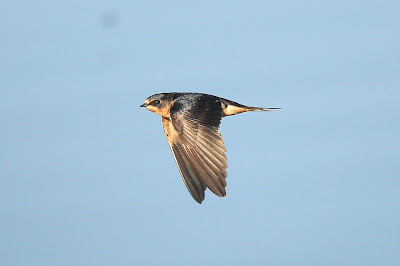 Probably the neatest picture of the day was this TREE SWALLOW mirrored against the water: 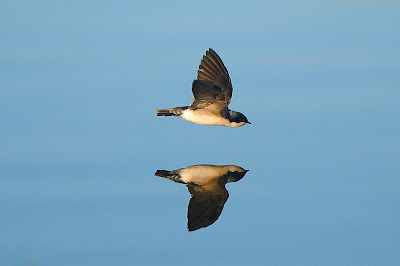 However, my best BIRD of the day was this late CLIFF SWALLOW.  I'm not entirely sure of the typical departure dates for this species here in California but I'm guessing this could be a new Yolo County record late: 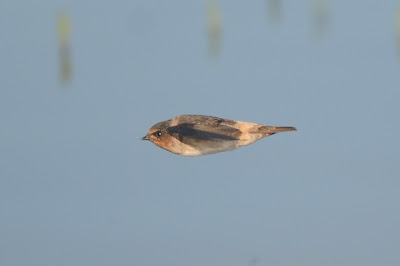 Back at home, I continue to snap shots of my local ANNA'S HUMMINGBIRDS: 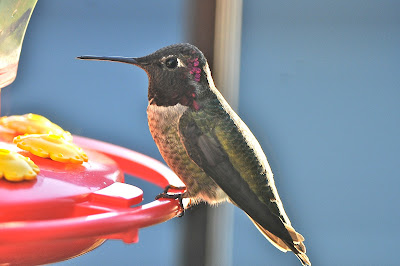 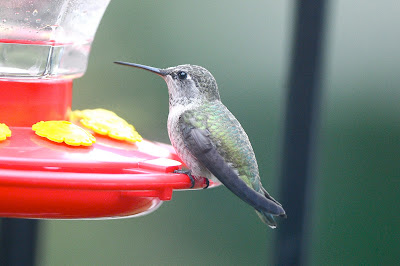 I've mentioned how common things like BREWER'S BLACKBIRDS were in previous posts.  I decided to snap another picture of one considering the light was at my back: 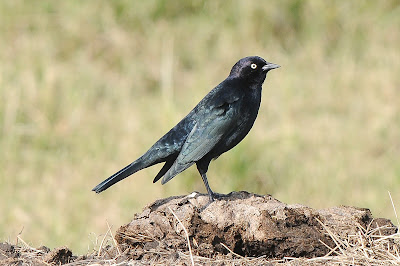 Another very common species that has moved in for the winter is the WHITE-CROWNED SPARROW: 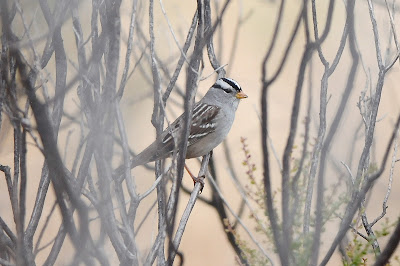 A juvenile SHARP-TAILED SANDPIPER was found over in Petaluma last week which caught my attention; it was a no-brainer to go chase it one evening.  Thankfully it worked out.  We spotted it way out on a mudflat which was lucky considering the tide was out.  The pictures are NOT good enough to ID it but I'm not heartbroken about it: 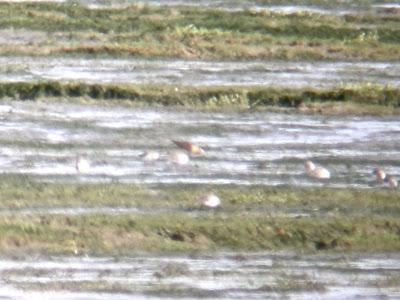 Another highlight in Petaluma was seeing and photographing PACIFIC GOLDEN-PLOVERS.  This was a new ABA photographed species for me and the first ones I've seen in the ABA area in probably 10 years. 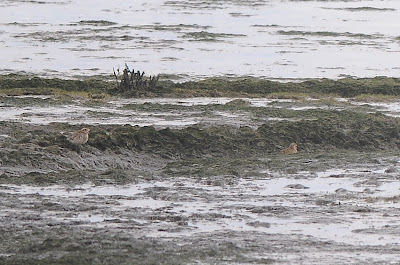 I was surprised to see a super-flock of LONG-BILLED CURLEWS regularly using a field along Interstate 5 just south of where I live.  Even though I had worked on this species for several years, I had never seen a flock of 500+ before!!  I stopped one evening and took a record shot of a part of the flock: 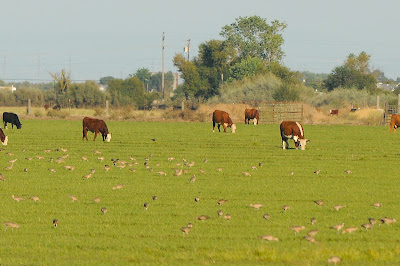 I continue to check a flooded wheat field on Staten Island on my own time to see what new shorbs have dropped in.  To date, I've tallied 14 species (ordered from most abundant to least):

Here is a flock of LONG-BILLED DOWITCHERS flying around that field: 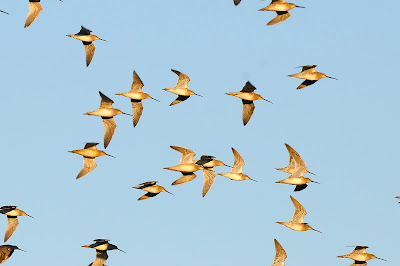 Staten Island has hundreds and hundreds of SANDHILL CRANES now as well.  You can't visit and not constantly hear them in the air or in the harvested corn fields.  Here are two as they flew by: 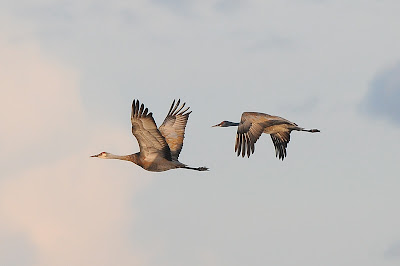 By far the most impressive spectacle at Staten Island for me so far are the huge numbers of CACKLING GEESE that can be found.  These "Aleutian" CACKLING GEESE breed on the Aleutians of Alaska and winter in the Central Valley of California.  Pretty neat to see such huge flocks; I'm fairly certain that EVERY bird in the next three photos is a CACG: 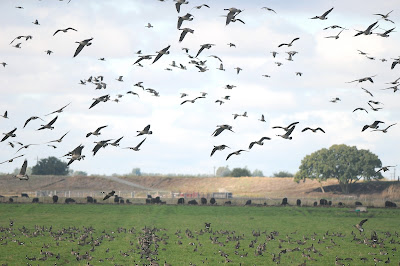 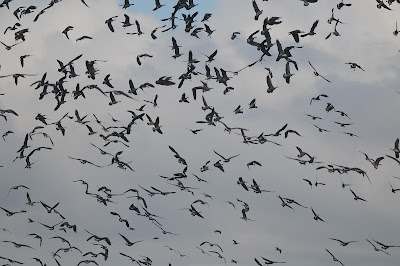 Another weekend trip took us up to the Bodega Bay area.  Although I didn't take many pictures, I snapped some of this HARBOR SEAL down in the ocean below us: 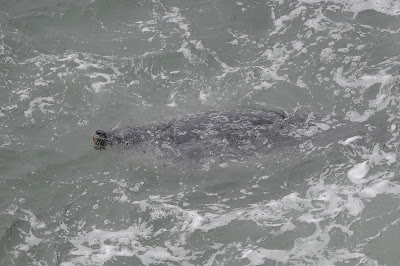 There was a nice diversity of shorebirds in the bay once the tide went out a little.  We tallied 16 species:

There were several FOX SPARROWS singing at Hole-in-the-Head as well: 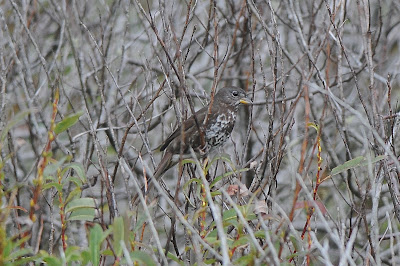 I'll close with a picture from Bodega Head: 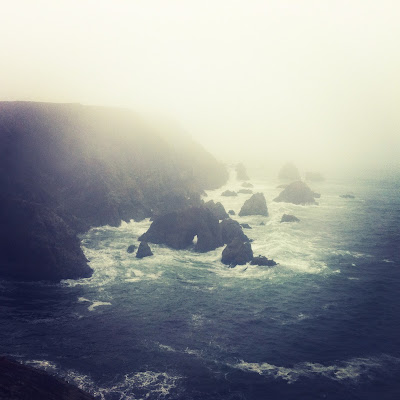