As you might remember, I have a love for the Arctic.  Some of my first field jobs were in Alaska and I worked there as a birding guide as recently as 2014 and 2015 when I was stationed at St. Paul Island in the Pribilofs.  My first visit to Alaska though was a whopping 25 years ago (hearing myself say that is pretty alarming).  Anyway, this state, we go way back.

Once signing on with Field Guides, I was happy to find that I was to guide some of the tours there.  Going home, in a way.

As it turns out, 2018 was the year I was to head back up do a two-parter.  The first tour visits St. Paul Island in the Pribilofs and then the Denali region.  The second tour finds itself in Nome, Seward, and Utqiagvik (formerly known as Barrow).

Anyway, the time came to head north and I was mentally ready (I thought.  I was coming off a 2-day break after my Maine tour).

Once I made it to Anchorage and Tom and I met our folks, we pretty much flew out to St. Paul Island right away.  This island, one of the Pribilofs, sits roughly 300 miles from mainland Alaska and 250 miles north of the Aleutian Islands.  In other words, it's remote.  Really remote.  It's closer to Russia than it is to Anchorage, for reference.

I had my doubts we were going to be able to land due to the fog but our pilot made a pass, banked hard, and swung in nicely.  Here's a view of my former home-island as we landed: 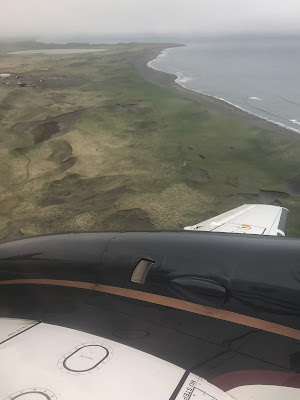 We got out birding pretty much straight away.  Here's Tom pointing something out to us: 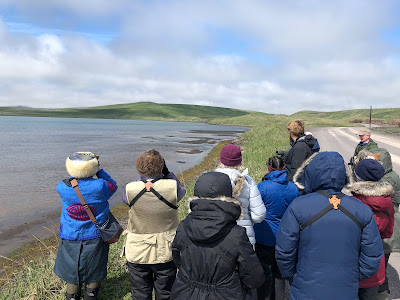 It was probably this BAR-TAILED GODWIT that was resting in the Salt Lagoon: 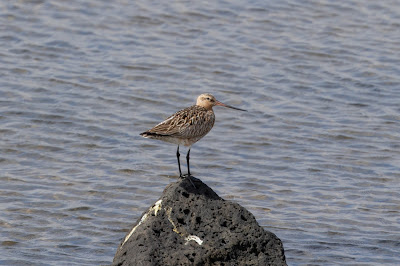 The Salt Lagoon there is a great spot near town that's always worth checking.  Sometimes HARLEQUIN DUCKS, which are abundant, sit on rocks right next to the road: 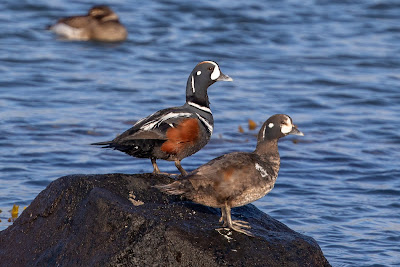 The quarry on St. Paul was hosting a mega rarity from Asia and so we wasted little time in going to try to find that.  It was a female ORIENTAL CUCKOO and, thankfully, we found it perched on a rock, facing left: 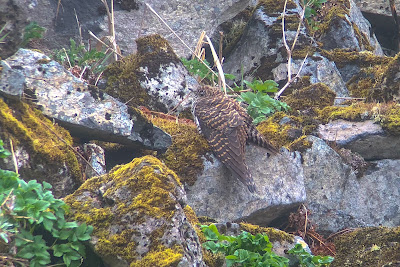 One of the most common species in the rocky areas like the quarry are the SNOW BUNTINGS.  It's a beautiful bird to have rummaging around every day: 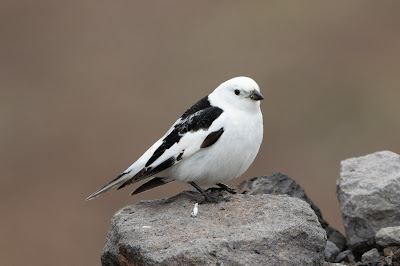 Another abundant songbird on the island is the LAPLAND LONGSPUR: 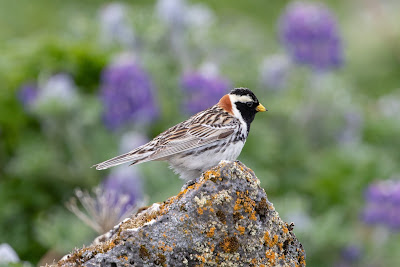 The quarry has quite a few nesting ROCK SANDPIPERS.  Here's a nest of one of them: 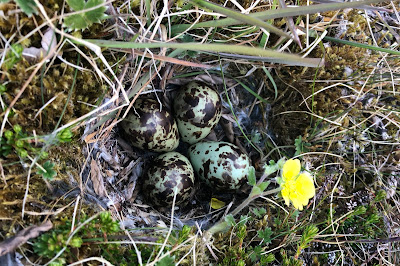 The ROCK SANDPIPERS are worth mentioning though.  The subspecies that breeds on St. Paul, Calidris ptilocnemis ptilocnemis, is a very large and distinctive subspecies.  They breed on only 4 isolated islands in the Bering Sea and it's been estimated that their population size is only about 20,000 birds in total.  On St. Paul, they're abundant and, well, tame: 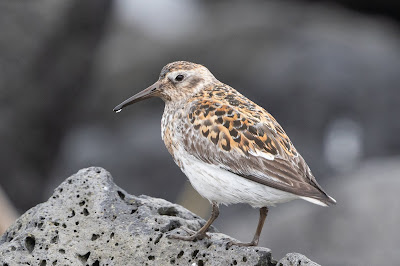 The seabird cliffs on St. Paul Island are a major attraction for birders.  Here's Tom and Pete at the Reef area: 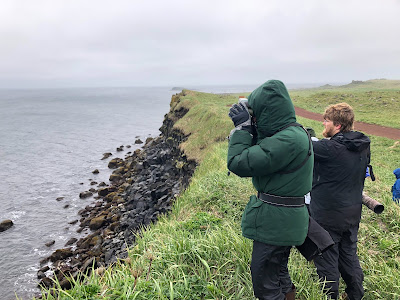 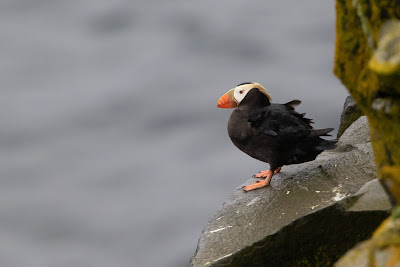 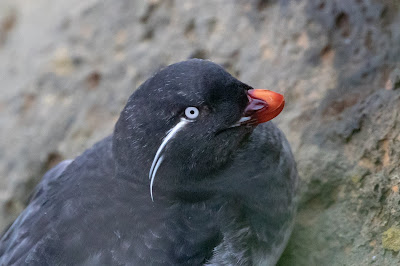 The other puffin that breeds on the island, of course, is the HORNED PUFFIN: 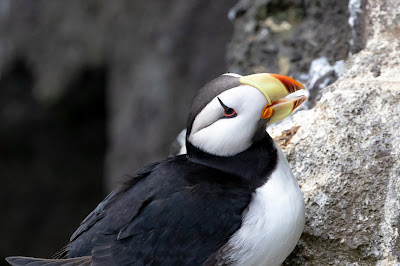 Both COMMON and THICK-BILLED MURRES nest on the cliffs there.  Here's the latter: 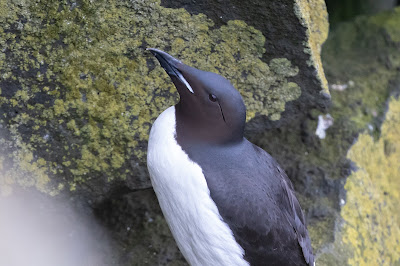 The most common cormorant on the cliffs is the RED-FACED CORMORANT, a specialty that's a lifer for almost everyone who comes to St. Paul: 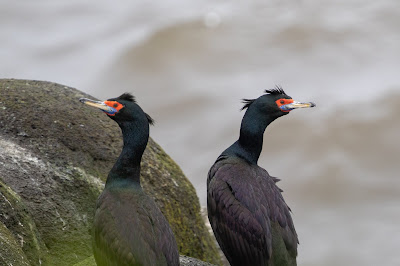 The cliffs also have nesting BLACK-LEGGED KITTIWAKES and so it's common to have them flying by you at eye-level: 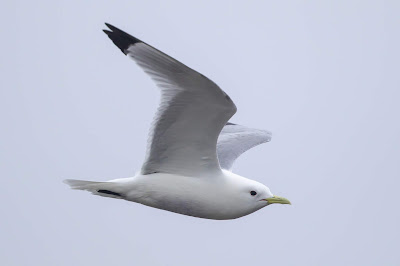 Sometimes the cliffs host birds that don't belong.  On our visit, we found a swallow darting around.  No swallows really belong out on the island and certainly none of them breed.  This lost guy is a BANK SWALLOW: 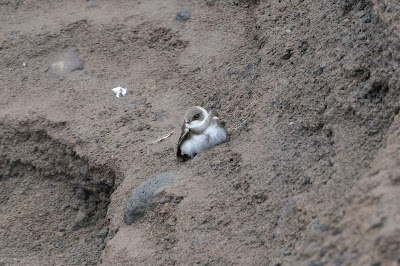 Below these cliffs, it's common to see the ARCTIC FOXES scavenging around.  They will gobble up anything that they can, from dead birds, eggs, seal afterbirth, to Pringles potato chips.  Here's one of these foxes amongst the rocks: 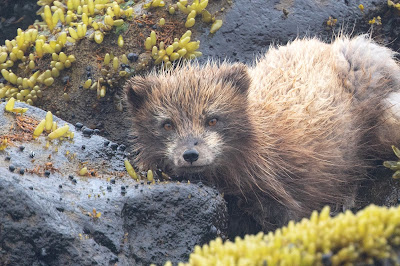 Although much of the shoreline on St. Paul is rocky, there are long stretches of sand beaches if you know where to go.  Here's a young SLATY-BACKED GULL, a vagrant species that is uncommon in the US: 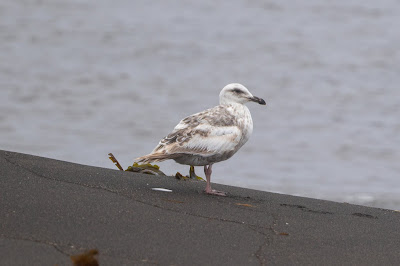 One of the reasons I enjoy birding on St. Paul Island is for the wealth of freshwater ponds and lakes.  These are completely different habitats from the seabird cliffs and this provides more diversity.  On the freshwater ponds, you can sneak up and find things like, if you're lucky, RED PHALAROPES: 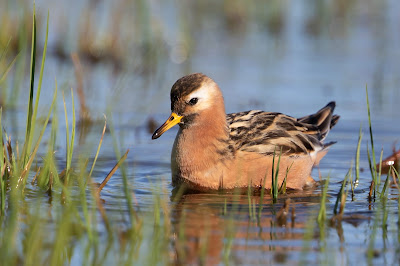 The more common phalarope species, and one that actually breeds there, is the RED-NECKED PHALAROPE: 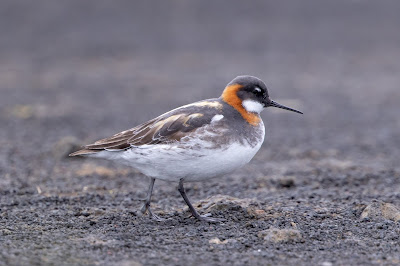 During our visit, we found this WHIMBREL next to one of the ponds: 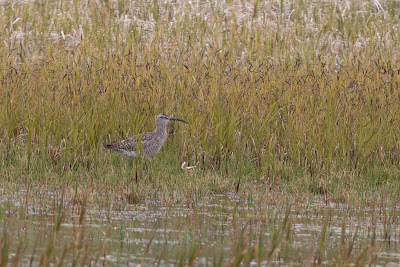 The WHIMBREL (Numenius phaeopus) is actually a type of curlew.  There are multiple subspecies and this particular one was a "Siberian" bird (N. p. variegatus).  This ID was made simple by white wedge going up the rump: 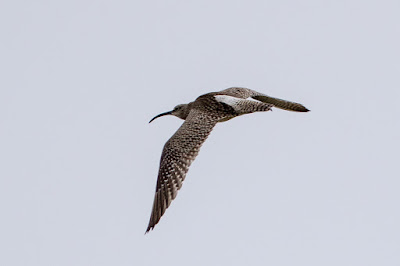 Although our time on St. Paul (actually, only our exit) was marred by travel snafus, we did enjoy our time there.  As you can see below, Tom and I were scheduled to leave the island 3 different days before we managed to leave! 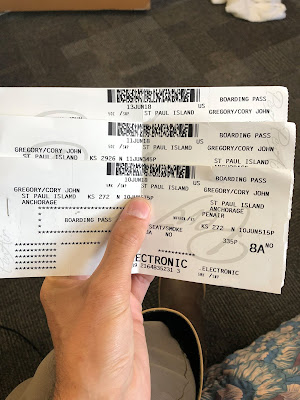 But, as anyone who frequents western Alaska will know, flying out there shouldn't be thought of as reliable or predictable.  Either way, we eventually were successful in leaving the island, albeit after several days of delays.  As our plane gained altitude, I glanced out my window to see the northeast part of the island showing well.  You can see Webster Lake, Sea Lion Neck, and even Hutch Hill and Hutch Cut (if you know where to look): 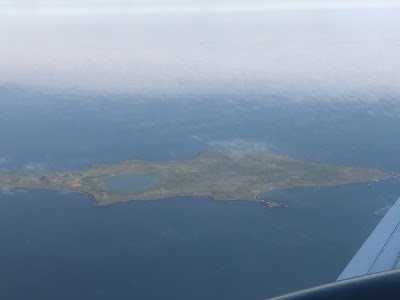 Once back on mainland, Tom and I caught up with our group near Denali and we birded with them one final day before the end of Part I.  Thankfully, we snagged some mighty fine birds that last day starting with some BOHEMIAN WAXWINGS: 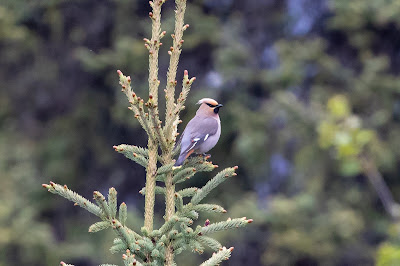 Yep, there are plenty of bears up there.  Here's my foot next to the some prints of what was probably a BLACK BEAR: 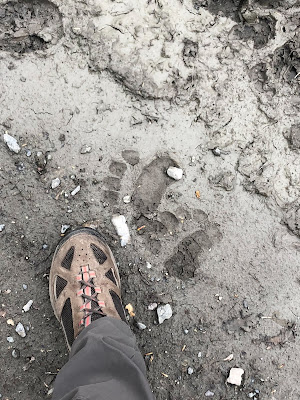 We visited a burned area which has been excellent for uncommon woodpeckers ever since the fire swept through.  Thanks to the fire and the specialized habitat it left, we enjoyed awesome views of this AMERICAN THREE-TOED WOODPECKER at a nest: 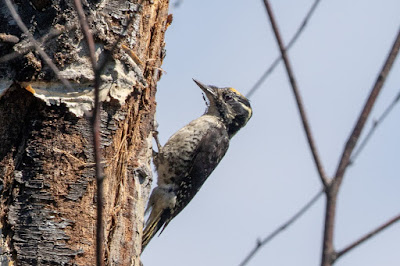 We even found the rarer BLACK-BACKED WOODPECKER in the same burn: 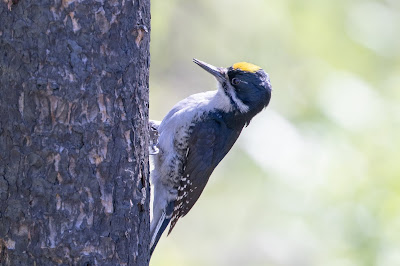 Although I wasn't lucky enough to enjoy the Denali area as much as our clients, I did snap a picture of a roadside vista and, if you look carefully, you can see the tip of the mountain sticking out above the clouds: