I think I owe folks some more pictures from Mexico?  I left off last time after sharing some of our sightings from Cozumel.  The story resumes after we took the ferry from Cozumel to the mainland of the Yucatan.

In the town of Coba, we birded along the lake edge where we added BLACK-HEADED SALTATOR, LEAST BITTERN, and several LIMPKINS: 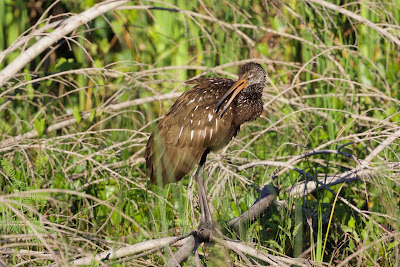 Although this MOTTLED OWL looks rather demonic... it's just a humble little owl roosting in a cave that we were able to see with a spotlight: 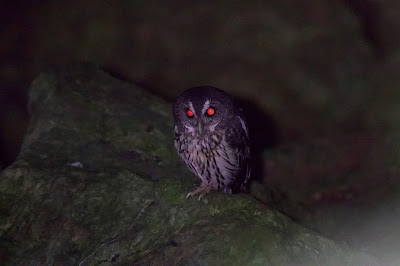 Another species of owl we saw was the common and widespread FERRUGINOUS PYGMY-OWL.  These little dudes are active by day and readily respond to imitations.  Cute, right? 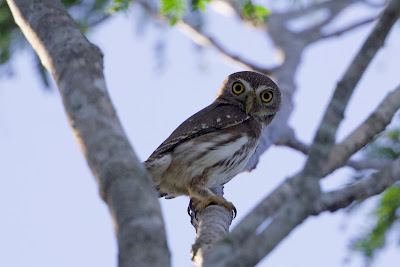 This tour was a good one for orioles!  We had a 5-way variety pack including Orchard, Hooded, Orange, Black-cowled, and Altamira Oriole.  Orange Oriole was a species I had never seen before as it's restricted to the Yucatan Peninsula (and it's nearly endemic to Mexico).  This photo, however, is of an ALTAMIRA ORIOLE: 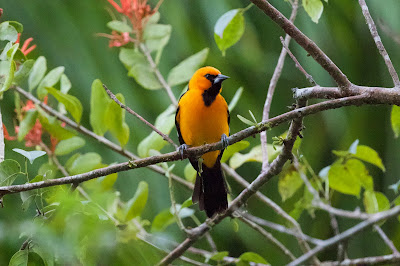 Motmots are always a crowd favorite and for good reason!  Our tour tallied both species present there, the Turquoise-browed Motmot and this LESSON'S MOTMOT: 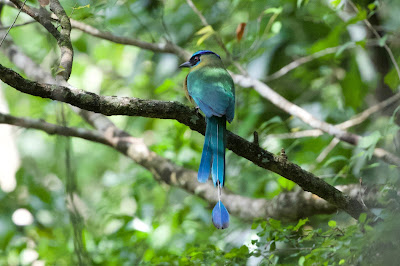 We were lucky to visit the world famous Chichen Itza ruins on this tour.  I had wanted to see these Mayan ruins for a long time.  Here's one of the main pyramids: 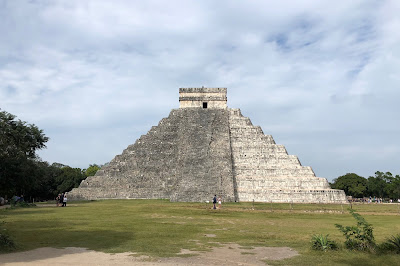 However, we were distracted at the ruins by this BAT FALCON that was perched up on a lookout: 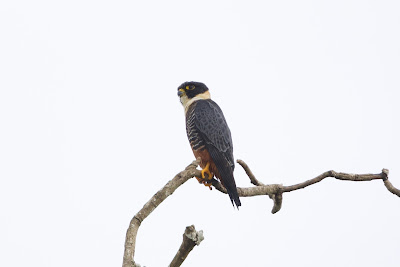 The RUFOUS-BROWED PEPPERSHRIKE is a pretty widespread species in the New World tropics.  These dudes, who are in the vireo family, have monster bills which you can kind of see in this photo: 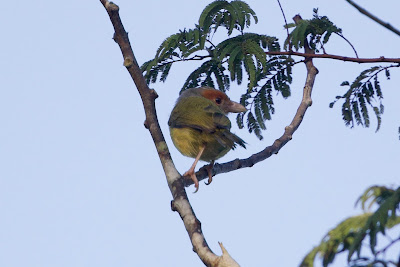 Another sign of us being in the tropics were the trogons.  We had two species on tour: Black-headed and GARTERED TROGON: 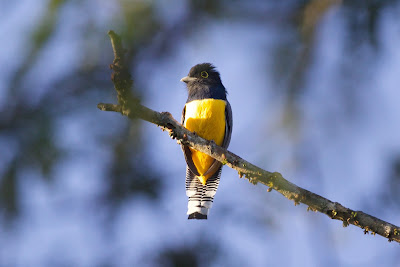 You seemingly can't visit this part of the world and not see kiskadees and the omnipresent SOCIAL FLYCATCHER.  They are everywhere: 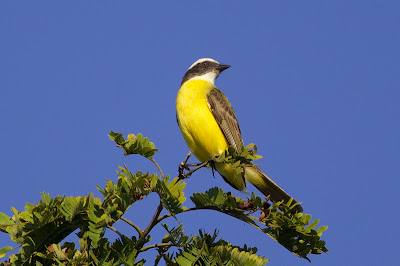 We also visited the ruins at Uxmal (pronounced Oosh-mall).  They, too, had a pyramid: 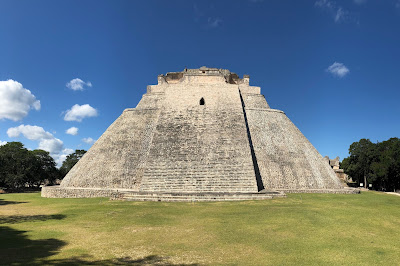 Here's a look at some of the impressive stonework that has endured for hundreds upon hundreds of years: 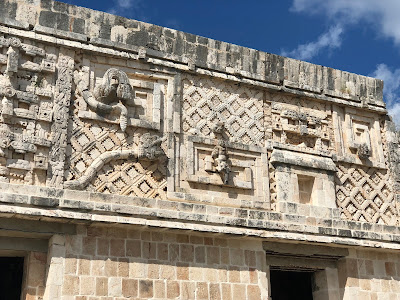 Here's a panoramic view of the Uxmal ruins: 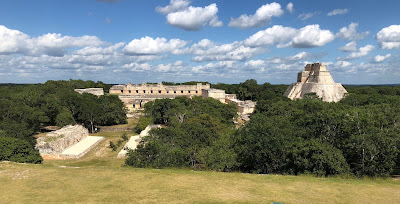 Around the ruins, GOLDEN-FRONTED WOODPECKERS were quite common.  However, the subspecies there looks nothing like the ones we have in Texas! 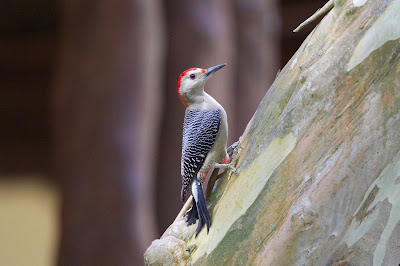 We birded several of the rural roads in the area and came up with a whole new variety of birds.  Here's our group ready to bird one of these paths: 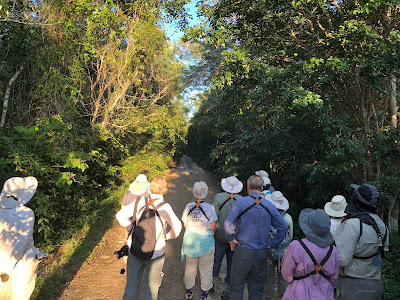 Mixed in were species like this GRAY CATBIRD... the same species that breeds commonly in much of the eastern US: 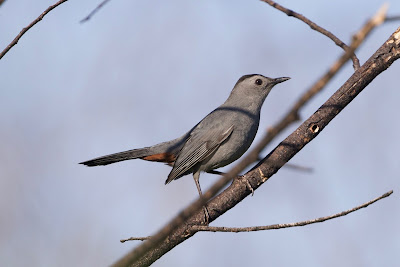 We came across flocks of YUCATAN JAYS here and there too.  This is a Yucatan endemic that we were eager to see: 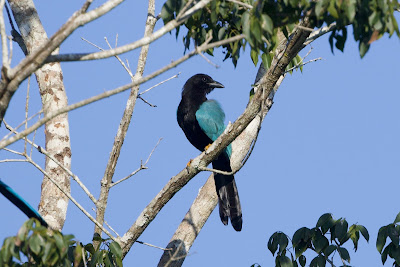 Another main target for folks was the oft-secretive LESSER ROADRUNNER.  On one of the mornings we found 3 of these in just a few minutes!  They posed in bushes along the road (and we gawked): 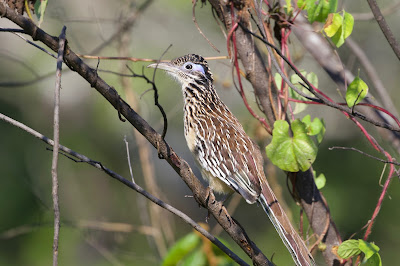 By the time we made our way west to the city of Celestun, a city on the west coast of the Yucatan Peninsula, we were around a different variety of birds yet again.  We had left the range of Tropical Gnatcatcher and found ourselves watching WHITE-LORED GNATCATCHERS in the low scrub: 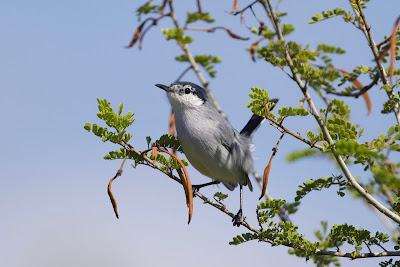 It was here in Celestun where we had a couple of main targets to track down.  One such species gave us no trouble at all, the Mexican endemic MEXICAN SHEARTAIL: 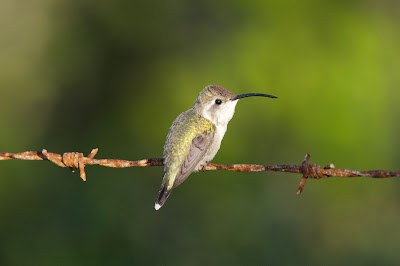 Another endemic we were after was the YUCATAN WREN.  Although once considered conspecific with Cactus Wren, these were split out as a distinct species.  Like the sheartail, these big wrens gave us no trouble and we found lots (always seemingly quarreling in the scrub): 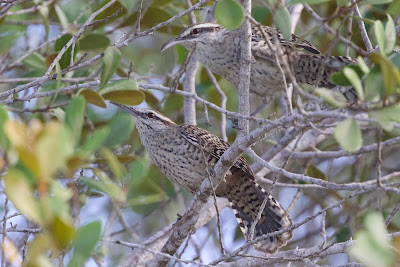 Just a Turkey Vulture?  Nope, not quite.  This is the similar LESSER YELLOW-HEADED VULTURE that swooped through: 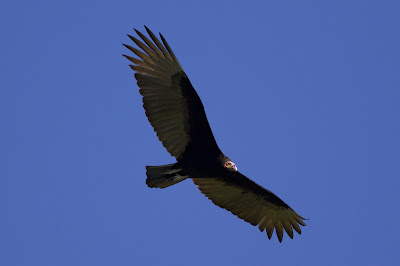 In Celestun, we took a boat trip on a river in order to see AMERICAN FLAMINGOS! 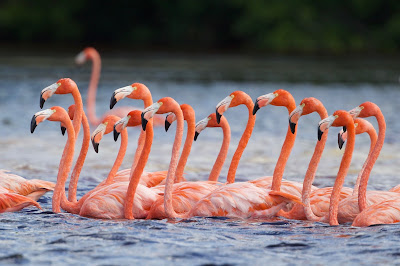 We ended up seeing 100-200 of these bright pink birds at close range.  Wow!  We also took the boats slowly through some mangroves where we saw a couple more new species like AMERICAN PYGMY KINGFISHER and this young BARE-THROATED TIGER-HERON: 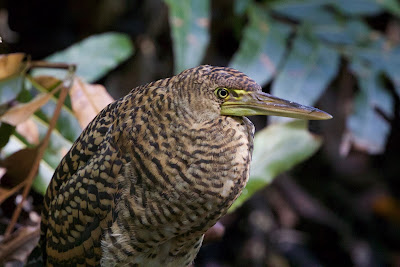 It was in Celestun where our birding came to an end, though.  I think our last birding stop was along a mangrove-loaded roadside where we nabbed a few last new species.  We saw the mangrove-specialist RUFOUS-NECKED WOOD-RAIL and this bizarre heron called a BOAT-BILLED HERON: 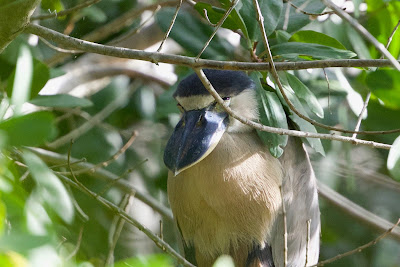 I'll leave you with a view from our last lunch stop.  I ordered my lunch, popped my boots off, and walked 50 feet down to the water's edge.  It was lovely! 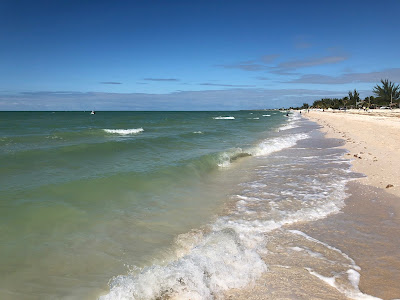