Looking up (and looking up)

Ash and I continue to hold the fort down here in western New York State.  Although the species diversity in these here hills is rather paltry during the winter, things are looking up due to a recent warming trend.  Because of this, we too are looking up (literally).

The woods are void of snow, the rivers have long been clear of ice, and ponds and lakes are slowly but surely starting to open up along their edges.

Additionally, the recent warmer temps have a few things on the move.  We're noticing more waterfowl moving in on the heels of the receding ice, a few more raptors are migrating through, and a few species of early passerines have returned.

Starting with raptors, we spotted this NORTHERN HARRIER riding on strong southerly winds a few days ago.  This species is rather uncommon in winter and I suspect this particular one is a recent returnee.  It's also only the 2nd report of this species in Allegany County in 2016: 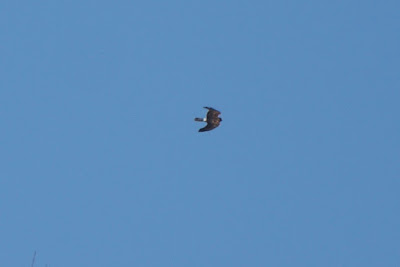 As one might expect, we are pleased to find that Old Man Winter is losing his grip on Cuba Lake.  This particular hotspot, arguably the best birding locale in the county, is starting to thaw revealing muddy edges.  On a recent circuit, Ash and I found these two GREEN-WINGED TEAL drakes chillin' like villains: 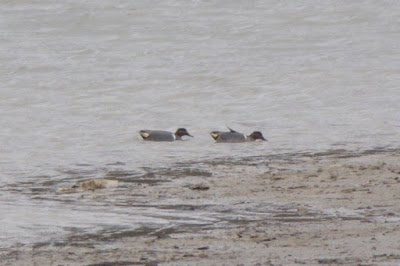 Although they weren't flagged as rare, this is the first February record of GWTE from Allegany, Cattaraugus, or Steuben counties in eBird.

We returned to Cuba Lake today and found an even more impressive indication of the changing seasons.  There were 65 TUNDRA SWANS milling about in the north arm of the lake! 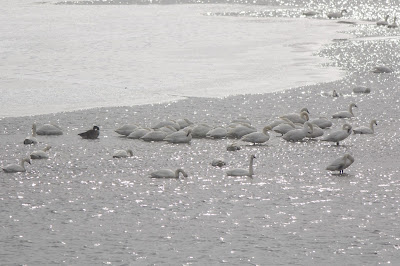 Although a few TUSWs wouldn't be that rare here in the winter, assuming they could find water, it's certainly unusual to see this many at once.  In fact, this flock of 65 is the 2nd-largest flock ever reported in eBird for Allegany County.

Other recent waterfowl arrivals at Cuba Lake include a female COMMON GOLDENEYE, an AMERICAN BLACK DUCK, and a few MALLARDS (perhaps some of which managed to overwinter).  We've also seen a few BUFFLEHEAD and HOODED MERGANSERS on the Genesee River which, given the early stage of migration, is a downright party in these parts.

Expected here at this time of year, we've seen the spring arrival of several common species that will nest locally.  Among these are RED-WINGED BLACKBIRDS, some of which we've seen at our own feeders.  We've also seen numerous COMMON GRACKLES and AMERICAN ROBINS milling about today, both of which weren't around until recently.

When the gray skies part and blue skies are revealed, it's not a bad landscape!  Well, assuming you're not looking at the crumbling infrastructure of a past-prime town.  Here's a view of the Genesee River from a local hiking/biking path that we birded a couple of days ago: 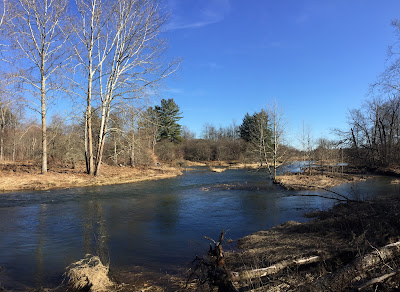 However, I think the fresh air was more rewarding than our checklist (seen here).  It was very quiet indeed!