As I alluded to earlier, we eluded western NY state and found ourselves back in northeastern Missouri.  However, on the way through, we stopped in Akron to try for the Code 4 Kelp Gull yet again.  We're no strangers to this routine!  In fact, this was our 9th attempt for this long-staying rarity.  However, unlike most long-staying rarities, this bird almost never followed any routine that made it chaseable (hence us missing it 8 times!).  In fact, it hadn't been seen for a while before this and, from the looks of it, people weren't trying for it as often.  We figured maybe these circumstances would help us break the curse!

We arrived at Springfield Lake that afternoon but the gulls had already started streaming in.  It didn't take long to find several GREAT BLACK-BACKED GULLS floating among the Herring and Ring-billed gulls.  Shortly after, we found a LESSER BLACK-BACKED GULL as well.  With this many gulls coming into roost, things were looking good!  It was then that Ashley said there was a bird I needed to look at.  I found it in my scope and studied it for a while... but I wasn't sure if the mantle was dark enough.  But then she said how it was right next to a GBBG... and the bird I was studying certainly wasn't!  Whaaaatt??  I zoomed over to the CORRECT bird and was immediately blown away by the darkness of the mantle and the size of the bird.  Short story shorter... she had found our long-awaited KELP GULL!  I hurriedly snapped a couple of digiscoped photos but they were all pretty crappy.  Here is my best hope: 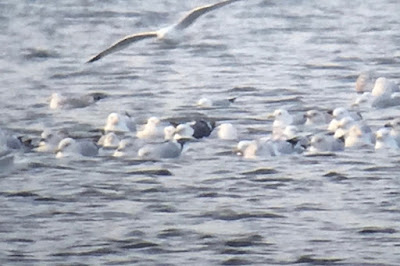 You can see a couple of things in this photo including the jet-black mantle that matches the darkness of the primaries (darker than any LBBG should show).  You can also see the size relative to the surrounding HERGs, it's about the same size (it's certainly no GBBG).  You can see the clean white head as well.  Although it's not great proof, it certainly was a straightforward study through the scopes as it swam next to both GBBG and LBBG.

We eventually had to call it a night but we certainly wanted to come back the next morning to see if we could study it some more, hopefully in flight.  However, we couldn't find it when we arrived the next morning.  Instead, we were left to count the GBBGs present and take photos of them instead.  Because GBBGs are not common in those parts and these sightings were flagged in eBird, I took this digiscoped shot showing 5 adult GBBGs in the same view:

So with that, we looked around and figured it was time to leave (and never to return?).  All these visits to this particular hotspot actually has given us a nice list; Ashley is ranked #5 all-time!  We didn't sit around to reminisce though; we climbed back into our packed car and drove 9 hours westward.

So after 8 tries for this horrid, winged spawn of satan... we finally were successful!  Maybe it's not such an evil bird after all?  You can see our checklist from that previous night here.  This was my first new ABA bird since Egyptian Goose late last year... so it's nice to have a rarity replace that nastiness on my blog sidebar!
Posted by Cory J. Gregory at 3/10/2016 08:29:00 AM