HAWKS AT A DISTANCE

Let me start by saying something I've said many times before: "I would NEVER be a hawk counter".

Really?  Let me explain.  The reason for this statement comes from my relative unfamiliarity with distant raptors and, as we often do, we resort to our comfort zones (distant waterbirds for me).  It's not that I don't like raptors and enjoying watching them, it's more of a realization I've come to that I simply do not understand them that well.  I'm excited to say, however, this book helps me understand raptors in ways I never thought possible.

I've never had the pleasure of meeting Jerry but we share a couple of similarities.  First and foremost, as you learn on the back cover, he has counted migrants at Whitefish Point in the Upper Peninsula of Michigan.  This excellent spot for spring raptors is also a mecca for migrating waterbirds and I have been lucky to count at Whitefish Point many different seasons.  I also have heard great things about Liguori from a mutual friend (Chris Neri) who has worked with Liguori in Nevada.

Liguori's latest book, "Hawks at a Distance" comes six years after his "Hawks from Every Angle" which I also own and reference.  As you can see below, his newest book is slightly smaller than his previous one (although the newer one is slightly thicker): 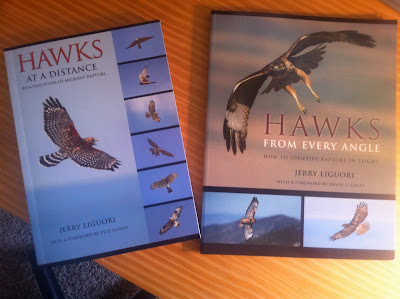 Liguori starts with a 12-page introduction in which he covers basic things like terminology, glossary, hawk migration, helpful hints, anatomy, etc.  He also gives examples (using photos) of the different flight positions of raptors such as soaring, head-on, gliding, wing-on, away, stooping, hovering, flapping, dihedral, and modified dihedral.  He continues by explaining hawk counting, optics for hawk watching, and photography (including ethics).  He closes the introduction with a couple of pages of basic timing of migrating raptors.  By using a modified line-thickness schematic, he illustrates how Broad-winged Hawks migrate later in the spring than Golden Eagles, etc.  Although this schematic would surely differ based on where you are, its main purpose is rather general.

What follows next are the species accounts (the meat of the book).  He starts each account with 1-3 pages of text overviewing the species and giving some plumage pointers.  Then come the photographs for that species.

Let me pause here and point out the photos.  These are NOT full-frame, super-detailed photos of raptors but rather somewhat distant views and always of raptors in flight.  This book is called, after all, Hawks at a Distance.  Seeing every feather of a migrating Red-tailed Hawk really doesn't help you learn about shapes and flight styles at a distance, right?  If you're interested in that side of raptors, I would recommend his other book which has larger photos in which the author focuses more on plumage.

Liguori doesn't leave anything out when it comes to photographs.  If a raptor has a light, intermediate, and dark morph, he includes photos of all of those.  He also includes photos of the different ages of a species (combined with all the different morphs).  What's better, he includes photographs showing a wide range of viewing conditions and lighting.  For example, a backlit and shadowed Ferruginous Hawk can look all dark, almost nothing like a Ferruginous Hawk that's extremely pale from flying over snow!  Likewise, only in this book can you find photographs showing such unique comparisons.  For example, consider the differences of viewing a head-on Broad-winged Hawk versus a head-on Red-shouldered Hawk.  Would you know what to look for?


So how many photos does he include per species?  It varies depending on how variable the species is, color morphs, aberrant plumages, etc.  Here are a couple examples of photo counts:

Here is an example of a typical layout of photos: 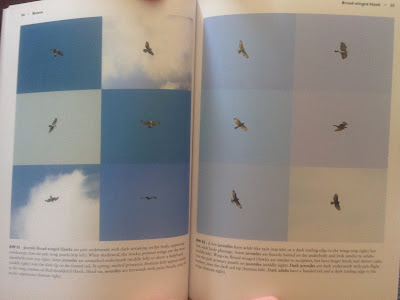 
Remember the old-school Peterson bird guide?  Yeah, the one that most of us had at one point during our early-birding days when we were learning the differences between a breeding Blackburnian and Blackpoll warbler.  Do you remember those black-and-white silhouettes of birds in flight, perched on a power line, etc?  I commend Peterson for including that basic but crucial part of identification.  Until now, I haven't seen another bird book that includes silhouettes (which is a shame in my opinion).  However, I was thrilled to see that Liguori includes a section towards the end of the book which emphasizes shapes and does so truly from every angle.  Only in this book will you find silhouettes of a Peregrine Falcon's rear end and be able to compare it to a Merlin's rear end.

Here are the pages of silhouettes for Red-shouldered and Broad-winged hawk: 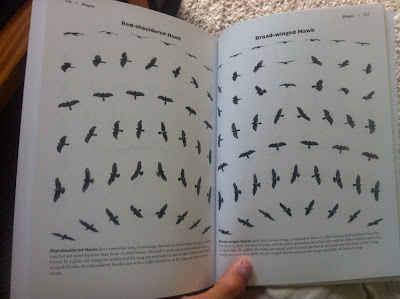 It's my opinion that most birders should spend MORE time learning shapes.  Someone who only knows plumages is at a serious disadvantage in the field with real-life birding situations.
Overview:
In all, this is just brilliant stuff.  Rarely does a bird book surface that portrays such an enormous amount of knowledge and skill.  You can look for a better migrating-hawk guide but you just won't find it.
If this book had a downside, it may be that it's an overload for a beginner.  If a birder is interested in first learning that a Red-tailed Hawk has a red tail, I might keep this book for later.  But if you're interested in improving your skills with distant raptors, look no further.  He leaves no stone unturned, exactly how a pro should do it.
In closing, if I were to be plopped on duty as a hawk counter, this would be the FIRST book I made sure I had.  Liguori's knowledge and skill of identifying raptors is simply unsurpassed.  His ability to tie together actual knowledge with photos makes for both an informative and yet concise book.

Oh, and if his wonderful book didn't seal my respect for Liguori, he also says in the introduction "However, I acquired Zeiss Victory FL binoculars in 2008 and believe they offer the finest image available".  Finally, someone who knows what they're talking about.

Disclaimer:
I received a complimentary copy from the publisher for review purposes, but the viewpoint expressed in this article is entirely my own.
Posted by Cory J. Gregory at 6/08/2011 03:02:00 PM