With the onset of December 2006, I realized that I'd be leaving Hawaii in just 3 weeks.  I got back into the photographing mood and let loose.  Here are some photos from my last 3 weeks on Tern Island:
If you've ever wondered, yes, Black-footed and Laysan Albatrosses can and do hybridize (although quite infrequently).  Here is a hybrid bird that, as you can see, shows characteristics of both parents.  The interesting thing was that this bird couldn't "dance" correctly.  Since both species have species-specific dances, this bird never paired or mated: 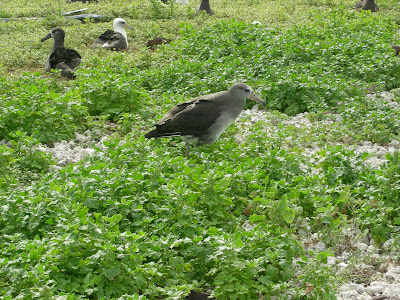 A nonbreeding RUDDY TURNSTONE on some rocks (these guys only winter in Hawaii): 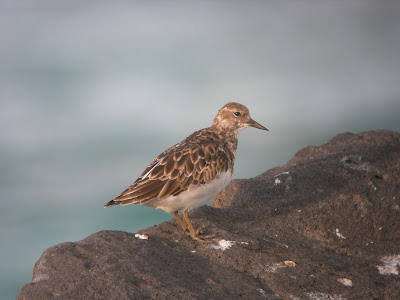 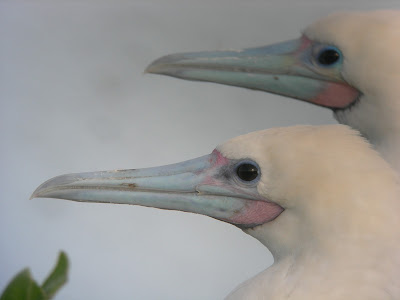 They're called RED-FOOTED BOOBY for a reason... here are two: 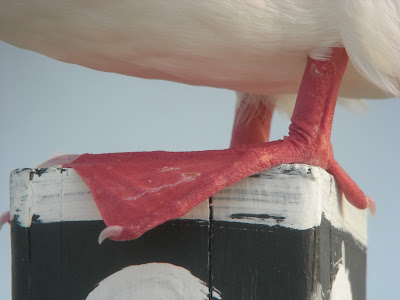 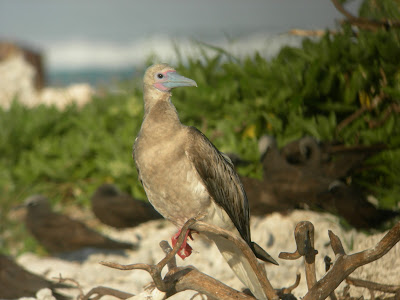 A typical view of a WHITE TERN coming in and hovering near my head: 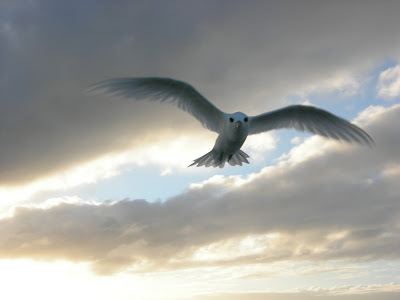 A BLACK-FOOTED ALBATROSS coming in to land at dusk: 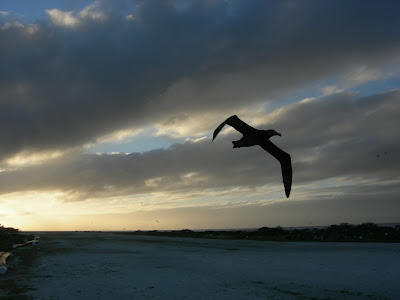 This time of year the GREAT FRIGATEBIRDS are starting to think about pairing.  This male has started to inflate the red neck airsac (used for displaying): 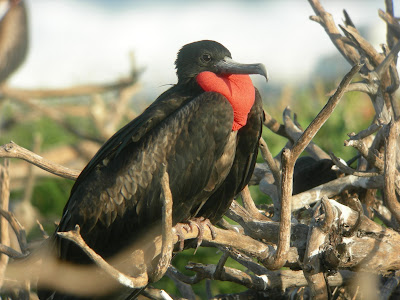 Here is a typical view of some shorebirds (two RUDDY TURNSTONES on the left with a SANDERLING on the right): 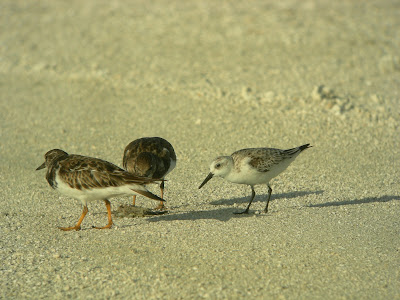 Still a crowd-pleaser, the palest of the island inhabitants, a WHITE TERN: 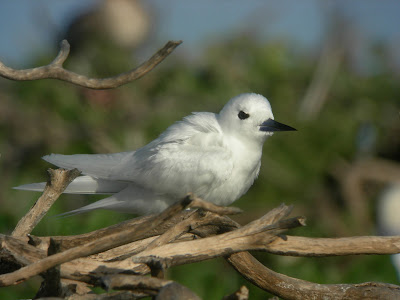 Here is a close-up of a BLACK-FOOTED ALBATROSS.  Note the scruffy feathers on the top of the crown... we marked each individual bird (for resighting purposes) on the head with dark nail polish!  This way, we can see which birds we've resighted and which are new to the island: 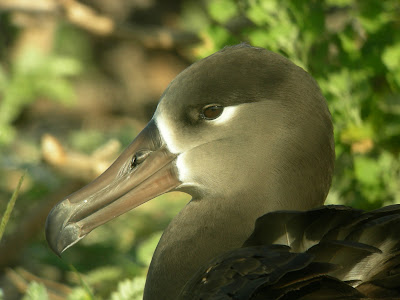 Being this tame, it wasn't hard to stand over this adult breeding MASKED BOOBY and snap a picture: 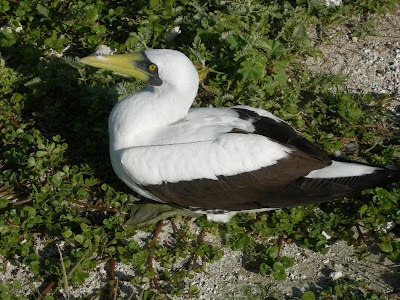 Ever see the sparkle in a LAYSAN ALBATROSS eye?  Now you have: 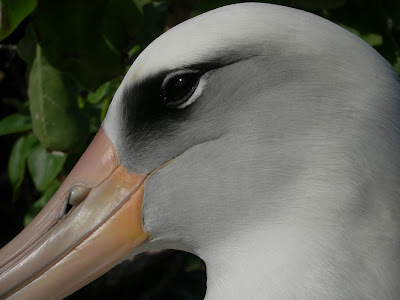 I'm not sure if I've posted many pictures of RED-TAILED TROPICBIRDS, but here is one either on a nest or chick: 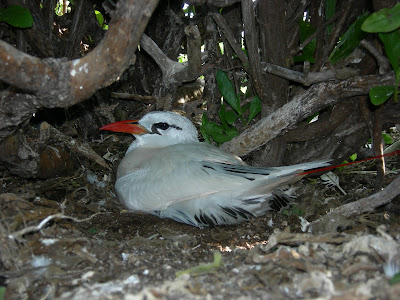 These birds are rather stunning in flight, even at a distance: 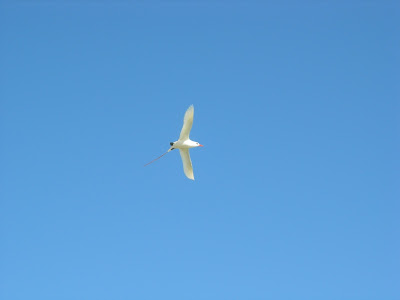 Here is a typical view of a BLACK-FOOTED ALBATROSS in flight.  Not too many birds have such long wings: 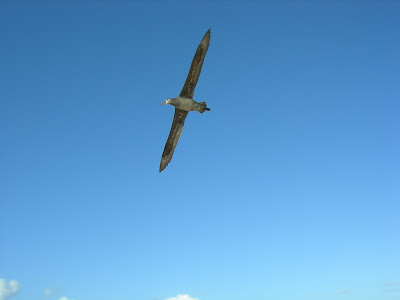 I snapped this picture of a BONIN PETREL (BLACK-FOOTED ALBATROSS in the background) on one of my last nights on Tern Island.  This was about 10 feet from our front door: 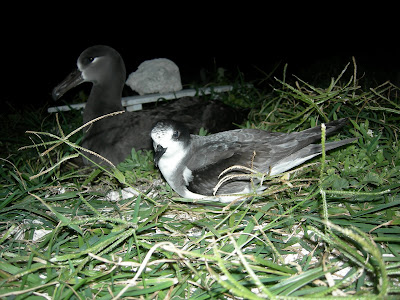 Then came the day that I was to be flown back to civilization (Honolulu).  The flight came in without incident and before long, we were on-board and flying off the island!  Being back in civilization was quite an odd experience!  For example, I hadn't seen a car in 3 months.  I had also been on an island with the same 5-10 people for 3 months!  I didn't have much time to sight-see around but I couldn't help myself from taking a picture of this SPOTTED DOVE as I waited at the airport in Honolulu! 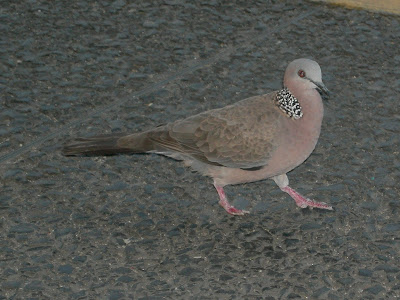 Another dove I photographed outside the airport was this ZEBRA DOVE: 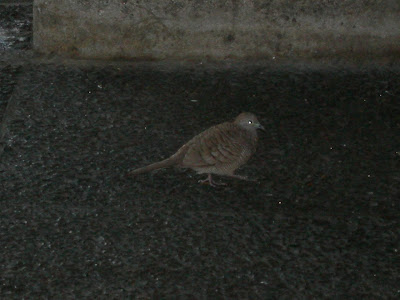