Today I tried some Hawaiian snorkeling for the first time.  I mean, I lived on a remote island in Hawaii, the reef was a 1 minute walk from my door; surely there is snorkeling to be had, right?  In fact, Tern Island DOES have some interesting snorkeling around the shoal and today was our first venture into the Tiger Shark-infested water.  Ok, no, never mind, I never did see a Tiger Shark but I wanted to... from land... maybe.
Even though I am, by nature, a terrestrial boy and previous snorkeling trips never ended well, I purchased a decent set of snorkeling gear back in the lower 48 before I came.  All intentions were that I'd be snorkeling a lot!  I also had an underwater housing for my little digital camera.  Sounds like fun, right?
We didn't have to swim far before I took in water through my nose and others found some interesting fish (yeah, I caught up eventually).  I don't know the first thing about fish so show me a goldfish down there and I'd be immediately coming back up to the surface for air.  Alas, I snapped some pictures and was able to look some of them up later.
Here are a couple BLUEFIN TREVALLY: 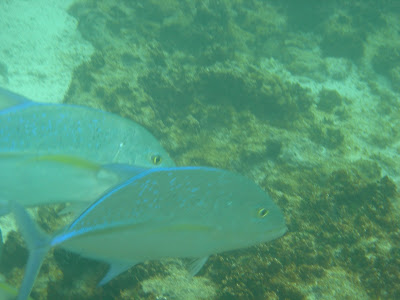 One of the most common were the CONVICT TANG.  I think we saw these on probably every snorkeling trip: 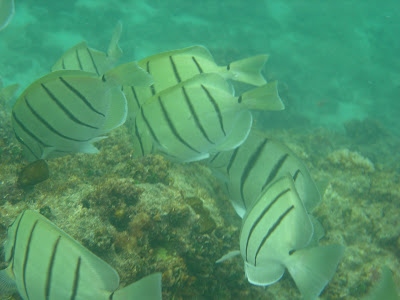 Last and probably least... this white and orange blob/streak is a juvenile YELLOWTAIL CORIS (a type of wrasse): 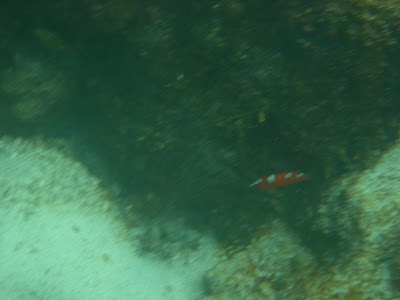 Thrilling, huh?
In looking back at my underwater pictures from today, I think I'll spare you guys!  It was " hey!  Look, there's  a blob here, ooh, a rock there".  Really nothing special.
Don't worry, I played with my underwater camera housing later in the season so this won't be the last of the fish...
Posted by Cory J. Gregory at 10/24/2010 05:09:00 PM