I might backtrack a bit.  You see, before I ever set foot in France, I had already started by doing some birding in Europe.  Not much, mind you, but it was at least a start.

This all came about because I had an 11 hour layover in London.  Annoying, you say?  Not exactly!  Being my first time to Europe, I was actually excited for the long layover... I was going to leave the airport, try to see some birds, and be able to color in a least a small part of my eBird map.

But first... I had to get to London.  Cue the 9 hour red-eye flight from Dallas.  By the time we were descending into London, the sky was starting to brighten: 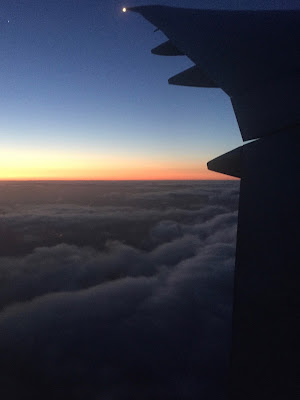 This is where Bird Guides comes into the story (www.birdguides.com).  Because I a) was jetlagged, b) hadn't a clue about getting around London, and c) wanted to see some birds, I decided to give those guys a shout and ended up hiring a guide for the day.  David Campbell, a top-notch and super-sharp young guy who works for them, picked me up from the airport and we were off.

Our destination was the Oare Marshes, an oft-birded hotspot in north Kent.  Here's a pin showing the spot, generally east of London: 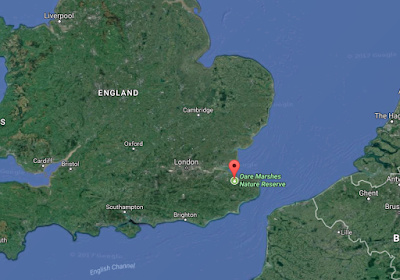 The drive eastward over on the M25 was decently quick, we were at the marshes in 90 minutes or so.

It didn't take long to realize that I wasn't in the Midwest of the US anymore... BLACK-HEADED GULLS were everywhere, as one would expect.  This one that flew by was even banded (or ringed, as they would say in Britain): 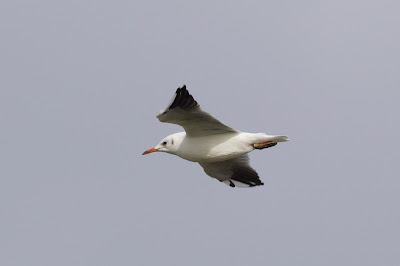 ... and of course, even the BARN SWALLOWS look quite a bit different from ours: 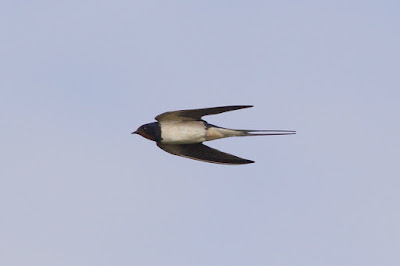 The above Barn Swallow is of the nominate "white-bellied" subspecies, Hirundo rustica rustica, which is the widespread and expected subspecies around there.  The ones we have back here in the states have redder underparts and are of the "American" subspecies Hirundo rustica erythrogaster.

I especially enjoyed the spot for the shorebirds (they call them "waders"), we ended up tallying 18 species.  I was kept pretty busy with enjoying my first ever COMMON REDSHANKS, EURASIAN OYSTERCATCHER, EURASIAN CURLEW, etc.  The avocets too... wow, I'm a big fan of their PIED AVOCET: 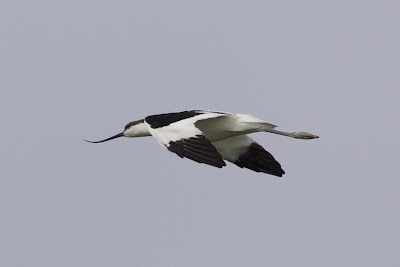 The shorebird spectacle really was amazing though.  Here's just a section of one of the flocks roosting in a shallow lagoon/pond area.  Most of these are COMMON REDSHANKS mixed with NORTHERN LAPWINGS, maybe some DUNLIN, MALLARDS, BLACK-HEADED GULLS, etc: 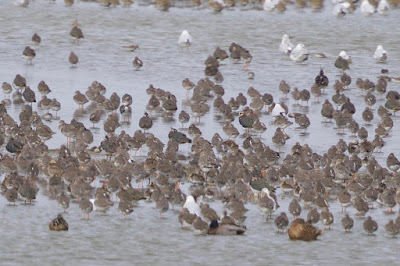 Another one of the abundant shorebirds present were the EUROPEAN GOLDEN-PLOVERS.  Most of this flock are indeed goldies: 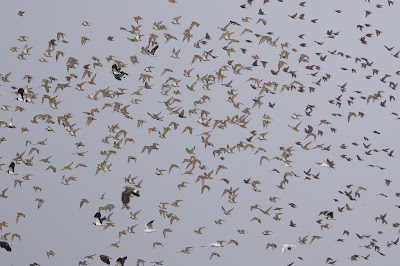 The above shorebirds were often set into motion by other migrants, ones with somewhat nefarious objectives, such as PEREGRINE FALCON, EURASIAN HOBBY, OSPREY, and EURASIAN KESTREL.  Here's the latter: 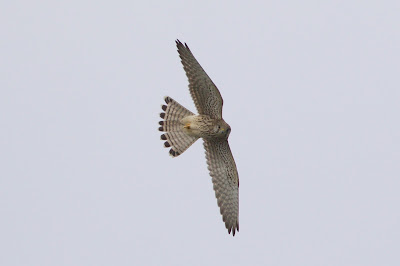 Quite a change from Missouri, eh?  The cool temps, tidal coastlines, it was a nice way to spend 5-6 hours: 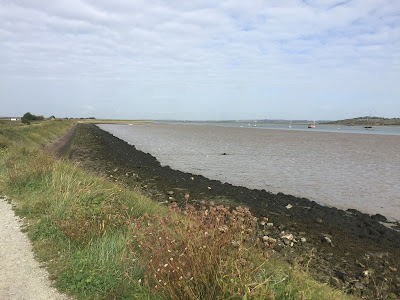 We ended up seeing a variety of things like COMMON CUCKOO, MEADOW PIPIT, BEARDED REEDLING (heard), REED BUNTING, LESSER WHITETHROAT, and many more.  In fact, we ended up tallying nearly 80 species.  Here's the checklist from our outing.

And then it was back to the airport where I hopped on a plane for France.  As our plane departed Heathrow, initially westward, I snapped this photo showing one of the monster traffic circles (no, we don't have those around here!): 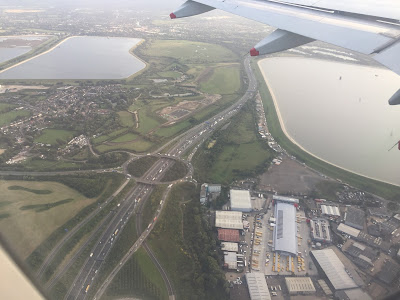 Compare that view to this view from Google Maps: 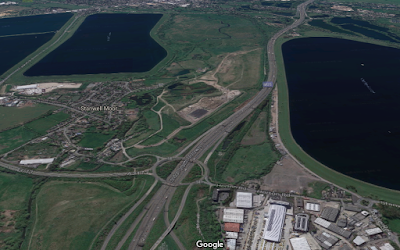 Nice match, eh?  The lake on the right, the one with the very rounded edges, is Wraysbury Reservoir.  The lake back and to the left is King George VI Reservoir.  And the motorway heading away from you is the M25 heading south.

So, as you can see on the resulting eBird map of my UK travel... we snagged 79 species on the day: 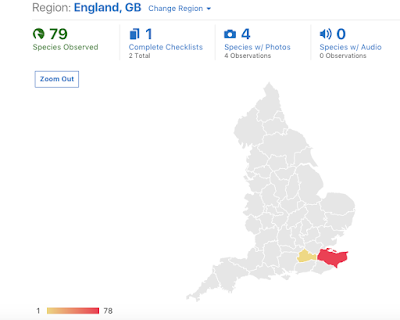 It also highlights my need for a lot more coverage in the area!  Perhaps someday I'll be able to return and actually travel a bit more.

Anyway, major thanks to David for taking me out despite me being rather zombie-like and completely useless.  You can (and should!) check out his blog here.
Posted by Cory J. Gregory at 9/24/2017 11:21:00 PM