As I prepare to leave for another tour (Maine, this time), I realized that I'm actually two tours behind here on my blog!  Unfortunately, this looks to be a reoccurring theme.

Anyway, I present to you a few photos from a tour to Colorado that Tom Johnson and I led (oh, if you're behind in the times, not to worry... I work for Field Guides Inc., a company based out of Austin, Texas.  And, actually, you can find my upcoming schedule here).

Colorado is, without a doubt, the best state to go looking for a good variety of sage-grouse, prairie-chickens, grouse, quail, etc., and this tour was focused mainly on those species.  The "chicken trip", some call it.

Our first "chicken" of the trip came in Kansas (yes, our tour swings into Kansas) where the threatened and vulnerable LESSER PRAIRIE-CHICKEN is the main target.  Roadside prairies in Kansas?  One of my favorite things.  Here's sunrise: 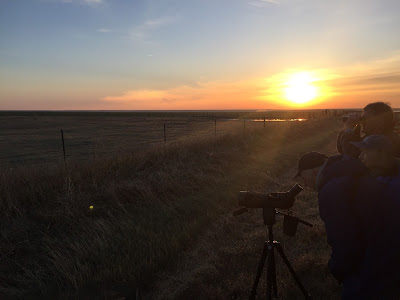 ... and here's the prairie-chicken dancing, stomping, and displaying within view: 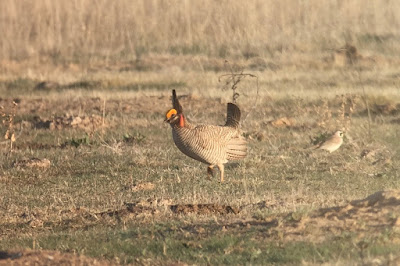 No, those aren't ears sticking up... those are neck feathers called "pinnae" that are erected when the grouse display.

We had some other good lookin' birds early in the tour too including this YELLOW-HEADED BLACKBIRD looking as sharp as they ever do: 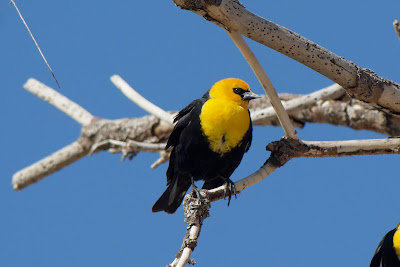 It was especially fun being in Colorado during migration because species like FRANKLIN'S GULL were moving through in large numbers.  Here's a look at one complete with the black hood: 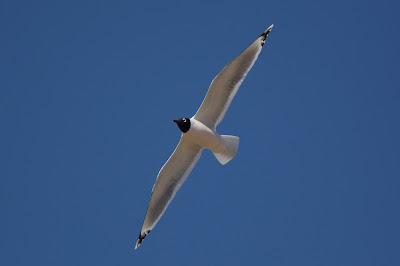 After our Kansas stint, we headed to Wray, Colorado.  It was there that we had private access to a beautiful lek of GREATER PRAIRIE-CHICKENS (a "lek" is a staging ground where birds gather to display to females).  Very similar to the previous species, these were bigger, with different vocalizations, and orange neck sacs instead of the reddish ones you see above.  Here is a male with his air-filled neck sacs inflated: 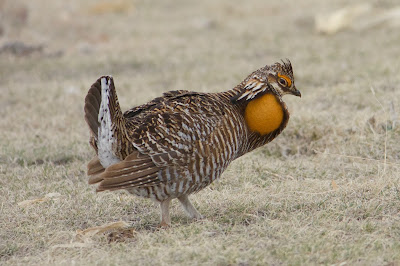 I especially enjoyed watching the interactions between rivaling males.  Here's one that got lunged at... and rocketed upwards: 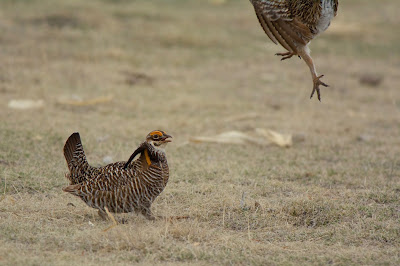 As we departed that lek, we found ourselves face-to-face with a GREAT HORNED OWL on a nest: 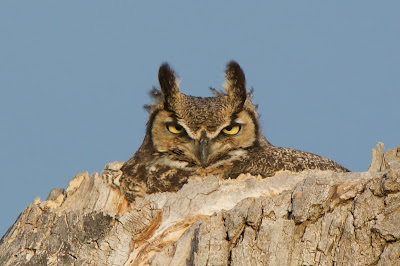 It also might be worth repeating... those "horns" ARE NOT EARS.  Those are tufts of feathers; the ears, which are on the sides of the head, are not visible.

Leaving the prairies behind us, we headed west up into the mountains.  Although we were en route to somewhere else, we stopped to do some birding and ended up snagging some really nice species including this WILLIAMSON'S SAPSUCKER: 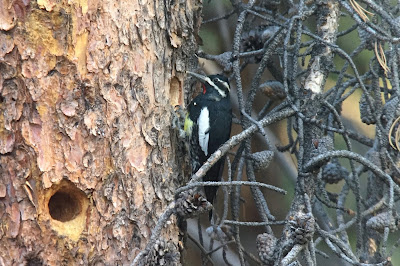 While on the subject of cool woodpeckers, here would be a good spot to add in this image.  It's a LEWIS'S WOODPECKER which, in terms of woodpecker coloration, has to be one of the more unique ones out there: 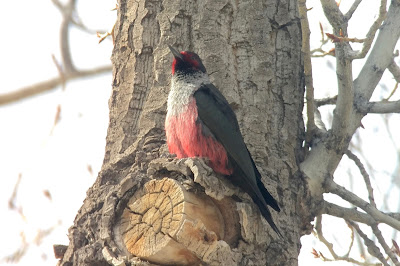 We also had killer looks AMERICAN THREE-TOED WOODPECKER on this tour.  Here's a male with the yellow cap: 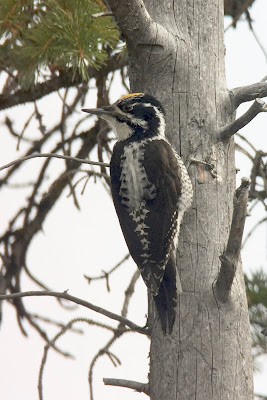 But the main target high in the mountains (and yes, fairly high, higher than 11,000 feet) was to try for the WHITE-TAILED PTARMIGAN, a camouflaged denizen of some extremely harsh terrain.  In fact, at this season, they're completely white!  Anyway, after quite a search (yes, we were getting worried), this distant white blob materialized on a ridge top about a mile away!  The pictures aren't grand but the feeling sure was! 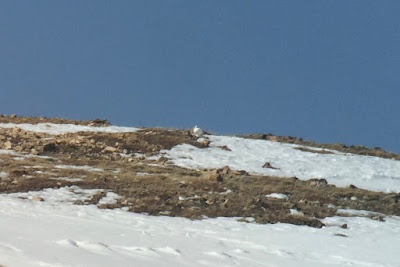 Once we retreated to lower elevations, we were able to catch our breaths (literally) and then headed for the town of Gunnison.  It was there that we had another grouse in mind, the endangered GUNNISON SAGE-GROUSE.  Sadly, only about 5000 of these are left on earth... but luckily, we were at the best spot to see them!  We spent a couple of predawn hours in the blind waiting for it to get light but once it did, we spotted these distant sage-grouse on the ridge.  Again, the photos aren't going to win any competitions but we felt very lucky to be able to see this rare species at all: 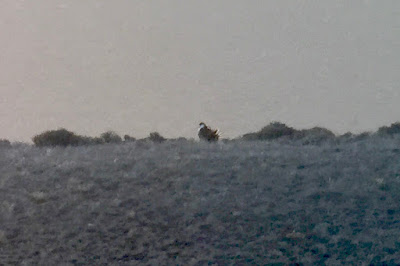 Near there, up in Crested Butte, the folks in my van were lucky to watch this Coyote do a "mouse pounce": 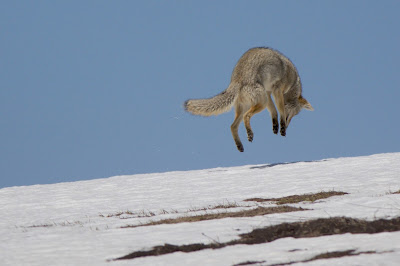 This is a hunting maneuver where canines like dogs, Coyotes, and foxes jump up in the air and then pounce down with their front feet to break through the snow and to pin down prey.

We were lucky to see a lot of SWAINSON'S HAWKS on tour; many of them were just arriving from their wintering grounds in South America.  It really is a nice-looking bird if you see them well: 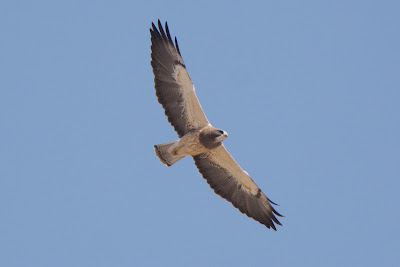 After leaving Gunnison, we made a special stop for yet another interesting grouse species... the DUSKY GROUSE.  We found one in short order and, thankfully, it hung around for all to see: 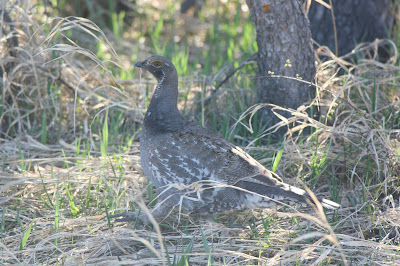 Many of you are probably familiar with PINE SISKINS... a small but widespread finch.  Here's one that posed for a bit showing its pointy bill, brown streaks, and notched tail: 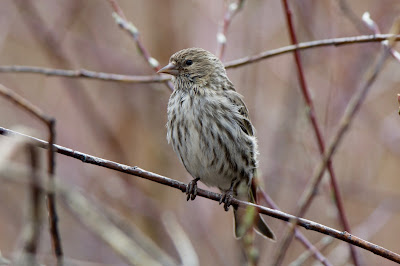 The DARK-EYED JUNCOS are pretty cool looking in that part of the world too.  This is the "Gray-headed" subspecies: 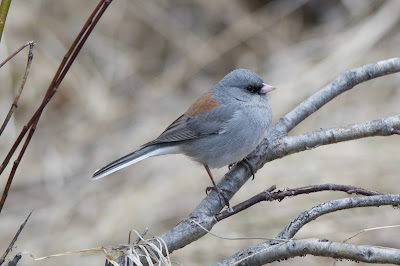 In western Colorado, the scenery changed into a more red-rock, canyon-land type habitat.  The scenery was great! 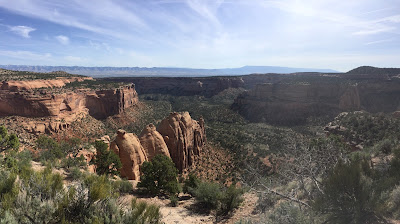 The dry and scrubby habitat hosted GRAY FLYCATCHER, PINYON JAY, BLACK-THROATED GRAY WARBLER, PLUMBEOUS VIREO, BEWICK'S WRENS, and many others.  Mixed in was this sky-blue MOUNTAIN BLUEBIRD trying to blend in with the sky.  :-) 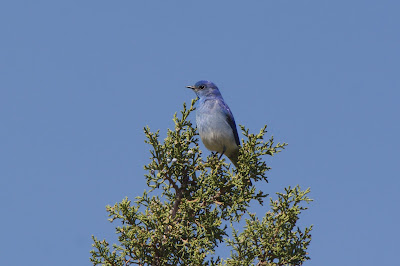 This GAMBEL'S QUAIL also felt comfortable enough to perch up and sing which we all enjoyed... 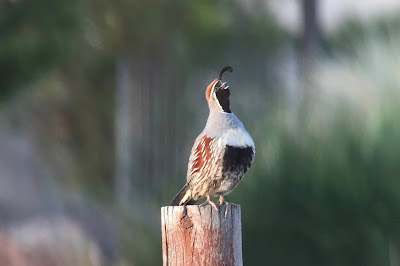 We eventually wound our way up to northwest Colorado where we were targeting yet another grouse.  A sage-grouse, to be exact.  We had already seen the Gunnison Sage-Grouse... so it was time for its bigger cousin, the GREATER SAGE-GROUSE.  We positioned ourselves predawn and man, what a show unfolded in front of us: 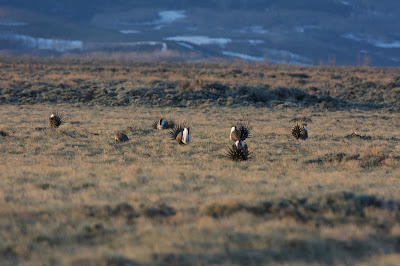 Here's a closer male that was displaying right next to our van! 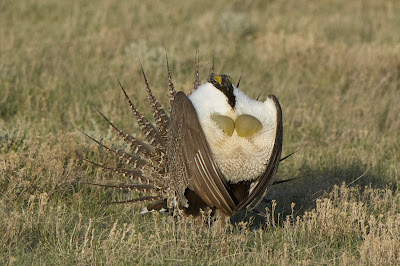 Ha, no, those aren't yellow boobs.  That's a male with inflatable sacs that he pumps full of air and thrusts out during his display.  When you stand back and try to take it all in... that's one CRAZY looking bird!

Our last chicken of the trip required us to visit a new part of Colorado, a gorgeous part of the state with mixed prairies on the sandhills: 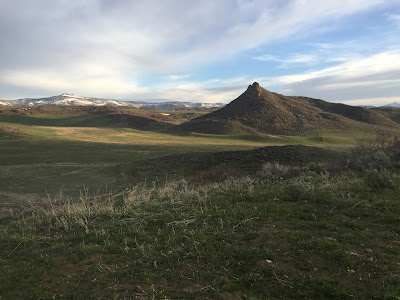 It was here that we connected with the SHARP-TAILED GROUSE: 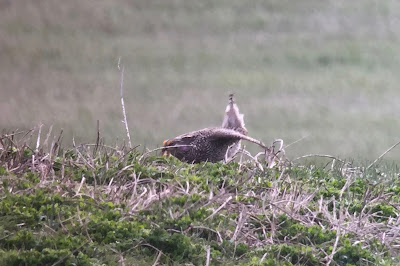 Can you see the pointy tail sticking up?  That's the "sharp" tail.

Anyway, after cleaning up the chickens, it was time to make a dash to the Pawnee National Grasslands where we had a couple of targets in mind.  One of them materialized right on the side of the highway... the regal FERRUGINOUS HAWK (my favorite buteo, if I had to choose): 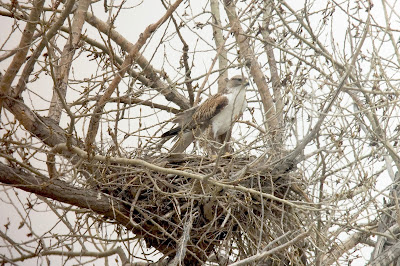 The main draw for our quick side-trip to the Pawnee?  This drab little shorebird called a MOUNTAIN PLOVER: 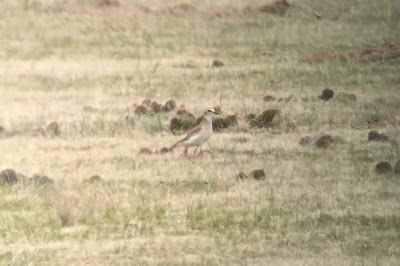 It had somehow eluded us earlier in the trip and so the special council (ahem... Tom and I) decided it was worth a try.  In the end, we're glad we did!

Once again, here's a photo of our fun group birding the prairie (we were enjoying the above species at that moment).  If you're able to find beauty away from oceans and mountains (I know I do), you might really love this part of Colorado:

Some of our best finds weren't even planned!  For example, we bumped into this LONG-EARED OWL at an oasis of trees during a bathroom stop: 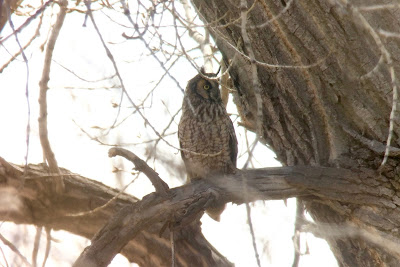 So after it was all said and done, it really was a fun trip full of amazing and unique species (and hey, all within the comfort of Mercedes-Benz vans!) 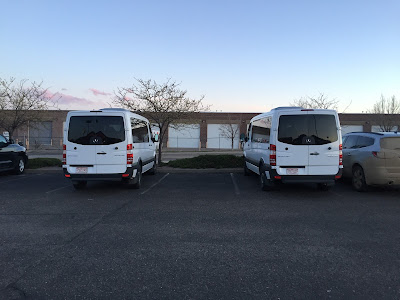