Although I've now been back in the Northern Hemisphere for more than a month, I've been admittedly slow in getting these blogs posted.  However, I know at least a few of you have been waiting patiently for the next post regarding my travels there and it would appear that today is your lucky day.

I left off last time after covering the birding in the Cairns area.  By this point in the trip, we had already seen more than 200 species including a wide range of specialties and endemics.... but it was about to get even better.  We hopped on our flight which flew us south to Brisbane (see below) in the southeast of Queensland: 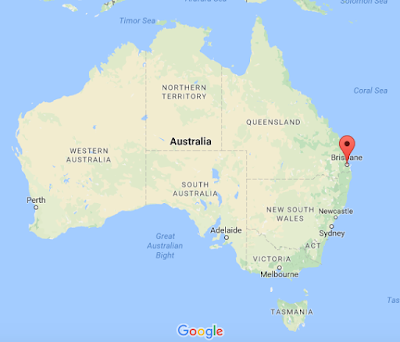 From the airport, we hopped on our full-size bus (complete with bathroom) and headed for O'Reilly's Rainforest Retreat in Lamington National Park.  Although we didn't arrive at O'Reilly's until after dark (we had battled some delays in Cairns), the 2 hour drive south to the retreat was still somewhat entertaining.  The road snaked through the rainforest, often a one-lane road, and before long it was hard to imagine that there was a lodge waiting for us at all!

We spent the next two days birding O'Reilly's and Lamington National Park which was VERY birdy.  With so many new species dripping from the trees, it was like a playground for bird-loving adults.  Add to that playground theme... a canopy walkway!  Here is our group suspended probably 50+ feet off the ground: 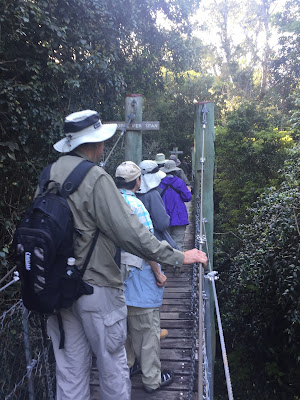 That canopy walkway was super nice for seeing birds at eye-level... birds that are usually 50 feet up off the ground!  That was the case for this RUFOUS FANTAIL: 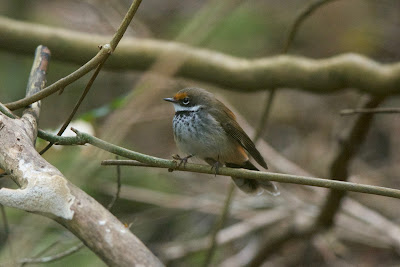 Speaking of fantails, here's another species we saw there... the GRAY FANTAIL.  Clearly it's assessing if I'm too large to eat: 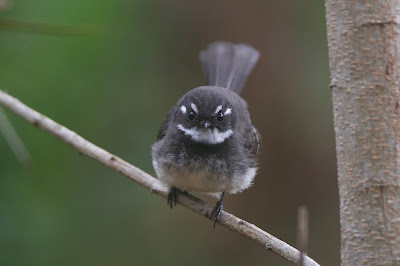 We saw a few new robins for the triplist too including ROSE ROBIN and this EASTERN YELLOW ROBIN: 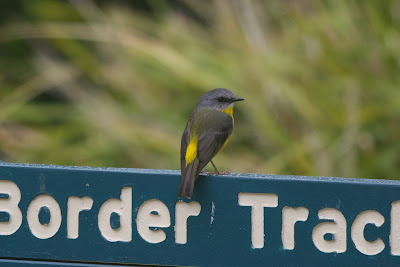 The bowerbirds at O'Reilly's were completely different from the ones we had seen in Cairns (but equally as bizarre and stunning).  Now we were spotting SATIN BOWERBIRDS sitting in the nearby shadows: 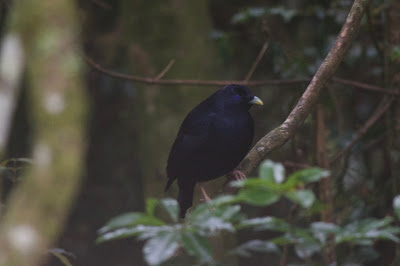 Unlike the bowerbirds I discussed in my previous post, this dark and glossy species decorates its bower with blue bits of plastic as you can see here: 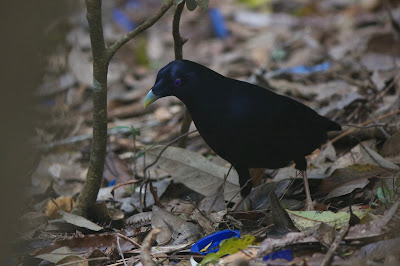 Nearby, there was another kind of bowerbird and this one was vivid.  The boldly marked (and somewhat tame) REGENT BOWERBIRD.  The combo of black and yellow was purely electric! 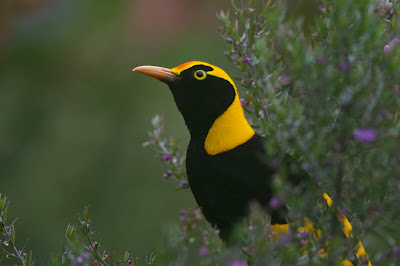 The lodge at O'Reilly's is actually very well known for the bright and colorful (and tame!) birds.  That was evident right away when various species flew in and actually landed on us.  Here's an AUSTRALIAN KING-PARROT that was right at home on a hand: 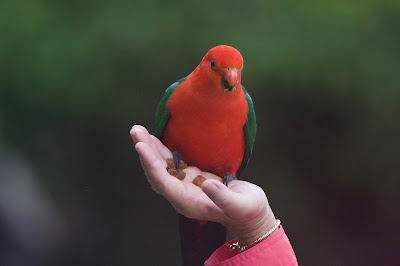 When the various seeds would get scattered by a) the birds or b) the scared people not wanting birds to land on them... other critters were waiting to clean up.  Here's a RED-BROWED FIRETAIL on the patio: 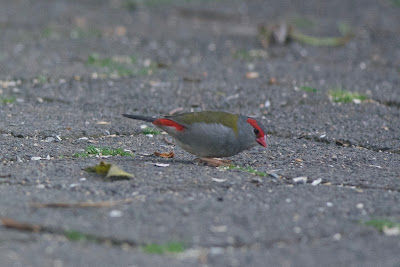 Nearby this GRAY SHRIKETHRUSH was hopping around too.  So much for secretive shrikethrushes! 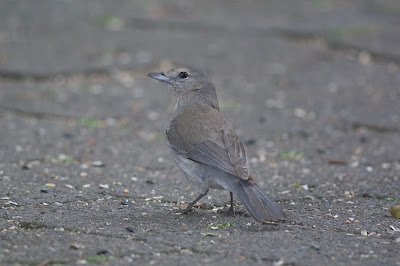 The large PIED CURRAWONGS were pretty friendly too; these "lunch partners" would sit nearby and swoop down for any scraps of food left unattended: 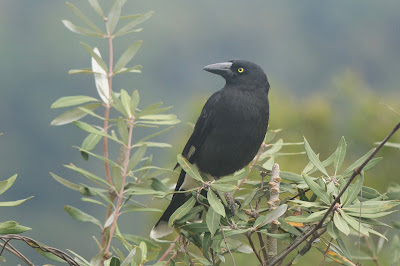 Providing another blast of color, the SUPERB FAIRYWRENS would hop around at arms length sometimes.  The combo of blue and black was gorgeous.  I think this is in contention for one of my favorite photos of the trip: 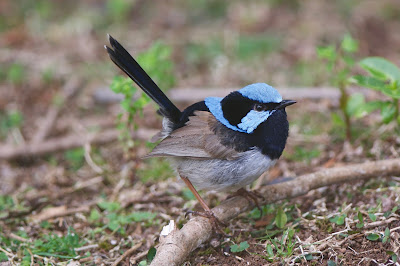 Overhead at the lodge, we were treated to this PACIFIC SWIFT one of the mornings.  These are pretty uncommon/rare there so we were happy to see this fast-flyer: 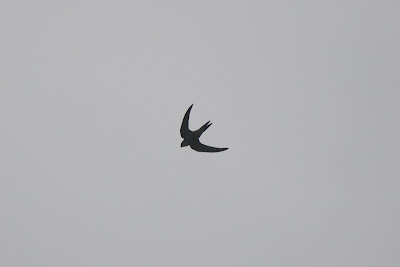 Another species we saw near the lodge was this EASTERN SPINEBILL which is actually a type of honeyeater.  As you can see, the name "spinebill" is pretty accurate: 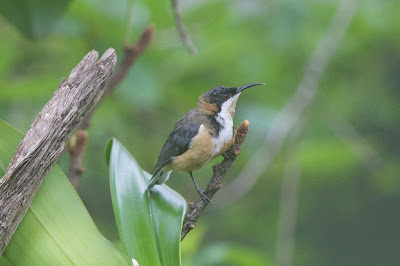 Out on the trails, we had a whole new suite of things to learn.  For example, these YELLOW-THROATED SCRUBWRENS, which almost look related to our Common Yellowthroats, were both abundant and friendly: 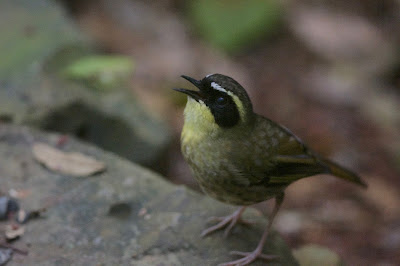 Much less easy to see were the RUSSET-TAILED THRUSHES skulking in the undergrowth.  Finally, one came out briefly for a quick pose (note how camouflaged it is): 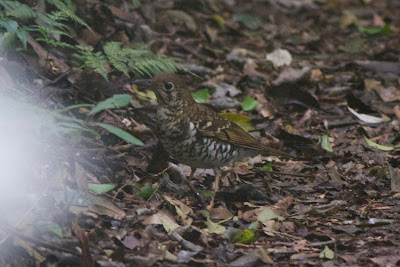 Another forest skulker was the AUSTRALIAN LOGRUNNER, a relative of the Chowchilla I mentioned before.  But with a name like "logrunner", how can it not be cool?  Here's a photo showing a pair; see if you can find them: 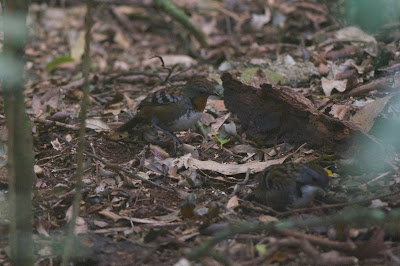 For being as loud and common as they are, EASTERN WHIPBIRDS were not very easy to see most of the time.  It was at O'Reilly's that we finally saw this species well including this male in the shadows: 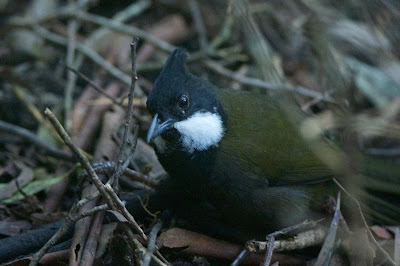 We ventured away from the lodge a couple of times to bird other spots in Lamington National Park including Duck Creek Road.  One of the highlights was seeing this lump sitting in a tree cavity.  If you look carefully, you'll see a roosting owl!  This little species is called the SOUTHERN BOOBOOK: 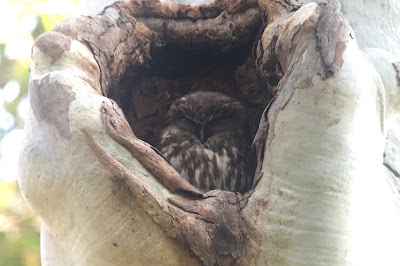 If you're wondering, it's named "boobook" because of what it sounds like.  Take a listen to this recording taken near O'Reilly's:

Down the road we stopped at a spot specifically for the uncommon BELL MINER.  We found these without much problem: 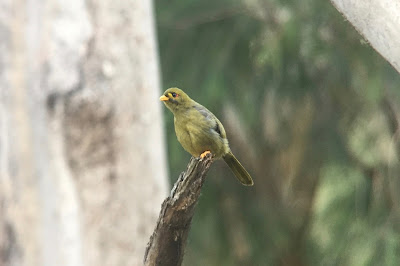 But the biggest reward here was seeing this wild KOALA! 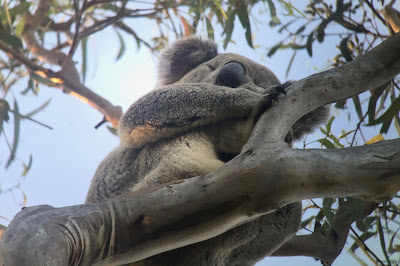 This is an arboreal herbiverous marsupial that is found only in Australia.  This would end up being a major highlight for several people and who can blame them?  Too cool.

We spent one of our evenings taking a nocturnal exploration around the grounds at O'Reilly's.  Decked out with flashlights and headlamps, we poked our way through the dense and pitch black rainforest.  Although we didn't spot any birds on our short outing, we did HEAR a couple of SOUTHERN BOOBOOKS and spotted this COMMON RINGTAIL POSSUM: 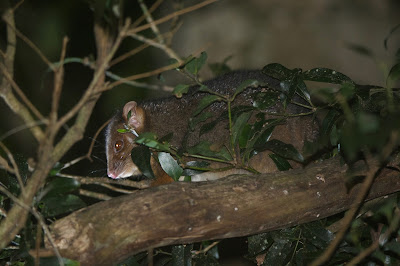 After a few days, our visit to the Brisbane area had come to an end.  HOWEVER, why not make one more stop for a couple of missing targets?  We stopped at a boardwalk/mangrove area near the city where we connected with MANGROVE GERYGONE and this BRUSH CUCKOO: 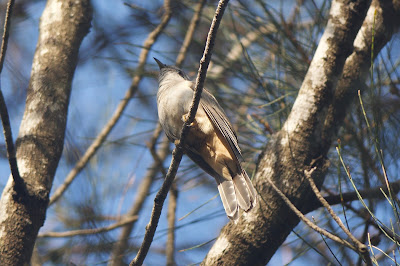