As it so happens, a month ago today was my last blog post!  Ohhhhh dear.  The reason for the tardiness is simple... too many birds.  :-)  As I prepare a DIFFERENT blog post from my most recent trip, I'll leave you with this posting about a trip earlier this fall.  Enjoy.

It starts not TOO long ago when I was fortunate to join Megan Crewe for a quick fall tour of Cape May, New Jersey.

What seemed to make Cape May such a great place to bird for a week in early October is that there were ALWAYS birds around somewhere.  Whether it's the phenomenal hawk migration overhead, or the "salty" sparrows and rails to search for, or a morning flight with hundreds of passerines moving overhead... there was always something for us to look at (and snap photos of!).

Keeping in mind that this particular tour fell completely in the month of October, I was impressed by the 19 species of warblers we crossed paths with.  Although the following species was one Doug and I bumped into BEFORE the tour began, I felt quite lucky to see this CONNECTICUT WARBLER: 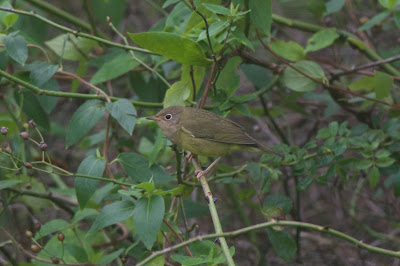 Turns out, this was actually the first time I had ever captured this species with a camera.

As it happens, there was an interesting phenomenon going down.  The cape had experienced really strong winds from the northeast which, in turn, had pushed water inland into saltmarshes.  The species that usually skulked around in those marshes had nowhere to go and were being forced to hide in beach grass.  We walked some stretches of grass and were blown away by the diversity.  A couple dozen SALTMARSH SPARROWS, NELSON'S SPARROWS, and SEASIDE SPARROWS were mixed in with wrens, sparrows, and even rails.  As an example of the weirdness... here's a CLAPPER RAIL with nothing but sand and water in the background: 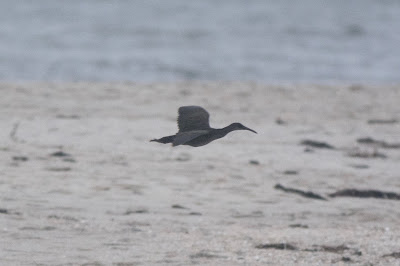 Once the tour began for real, we loaded up in the SUPER comfortable Ford van (bus?).  You know a birding vehicle is comfortable when I can walk down the aisle perfectly upright and not have my head touching the ceiling! 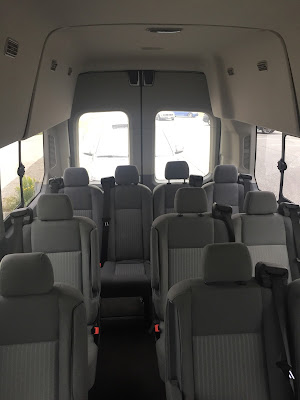 Our hotel was situated right across the street from the beach which made for easy access to a fun suite of birds including this swarm of BLACK SKIMMERS:

In fact, here's proof of our small group enjoying some seashore birding: 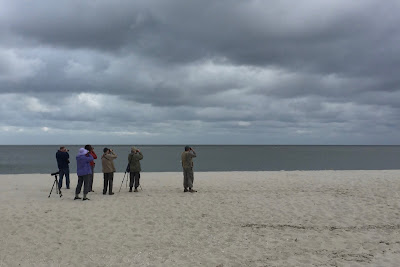 The hawk migration was quite spectacular several of the days.  We saw hundreds of hawks of a wide range of species including both common accipiters (COOPER'S and SHARP-SHINNED), all three common falcons (PEREGRINE, MERLIN, and KESTREL), as well as things like BALD EAGLE, OSPREY, and others.  Here's a COOPER'S HAWK from one morning: 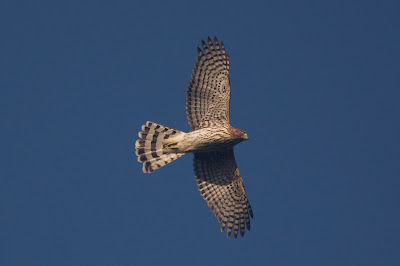 We would often start the day at Higbee's Beach working passerines and whatever else might have dropped in.  For example, a couple of laps around some of the weedy fields there yielded 50+ species including this classic GRAY CATBIRD: 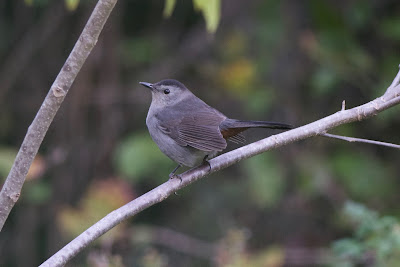 The warbler diversity wasn't bad for the month of October and we crossed paths with things like BLACK-AND-WHITE WARBLER: 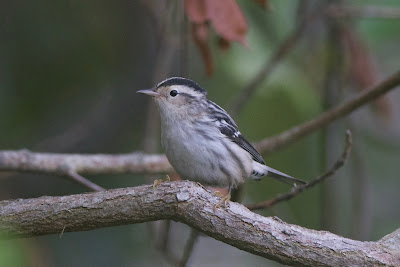 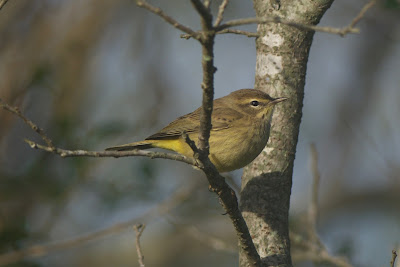 I suppose it's a bit ironic that we missed the CAPE MAY WARBLER... a species named after that location!

In addition to the myriad of warblers, we had hoards of sparrows as well as the odd flycatcher, cuckoo, thrush, and tanager.  One such SCARLET TANAGER stayed put in these grape vines for probably 15+ minutes.  We all enjoyed scope views of this surprisingly-camouflaged bird: 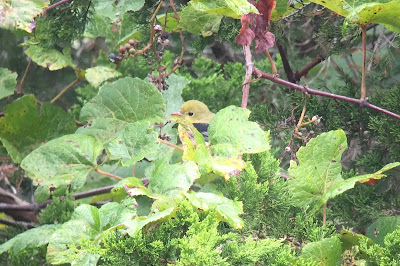 Venturing out to the seashore and saltmarshes by boat, we found a variety of shorebirds including this DUNLIN and BLACK-BELLIED PLOVER: 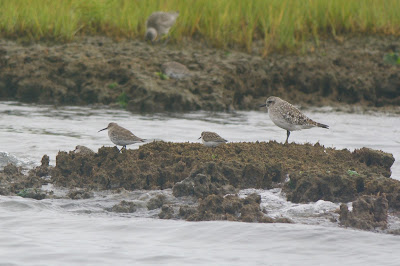 Elsewhere on the tidal edges we found this pair of GREATER YELLOWLEGS: 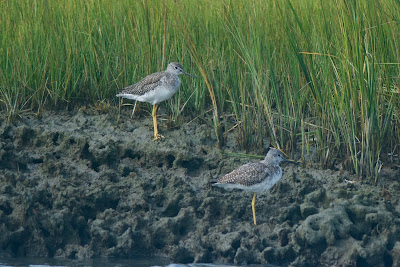 When the tide was in, we'd venture to a few spots where shorebirds would roost during the high tide.  One such spot delivered us this close MARBLED GODWIT mixed with WILLETS and things: 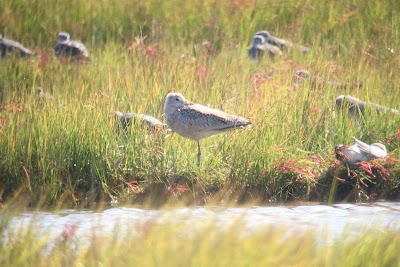 There was a fun selection of egrets and herons too including both NIGHT-HERONS, LITTLE BLUE HERON and many SNOWY EGRETS.  Here's the latter looking quite dapper: 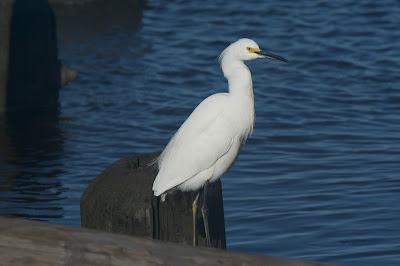 Probably the opposite of dapper is this rather ratty COMMON EIDER we saw in the nick of time on our last morning at Cape May.  Although they'll winter here in numbers, this one was a touch early: 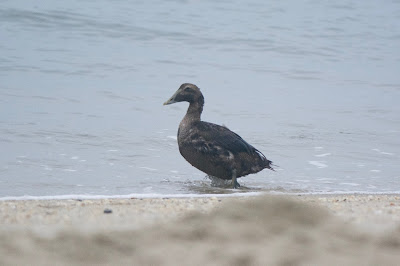 Another enjoyable aspect of this tour is that there was so much more to look at besides birds.  Here's a GHOST CRAB that I digiscoped at one point: 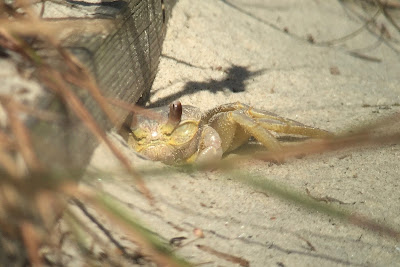 Staying true to my other hobbies, I was happy to see some butterflies in the mix on some of the warmer days.  One of the most common species were the COMMON BUCKEYES: 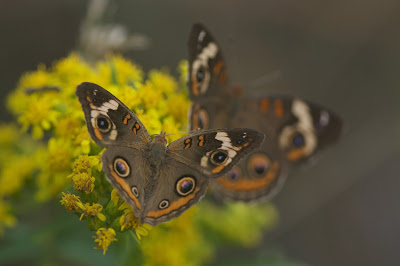 A close second, and a much more recognizable species, were the MONARCHS that were migrating through.  We got to talk to some researchers who were tagging Monarchs, hoping they'd be resighted where they winter in Mexico.  One of the displays in the gift shop had an amazing tree of chrysalises that were in different stages of emerging: 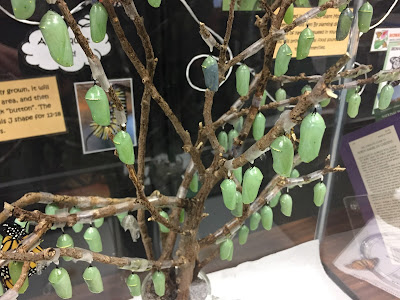 In the Triangle Garden near the state park, I snapped a few pics of this LONG-TAILED SKIPPER as well: 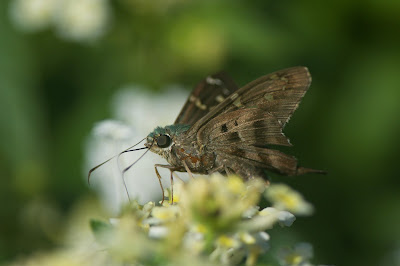 Of course, the long tail is much more evident in the following photo: 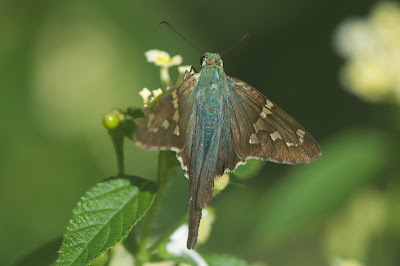 We even had some representation from dragonflies on this tour too including many COMMON GREEN DARNERS and this BLUE-FACED MEADOWHAWK: 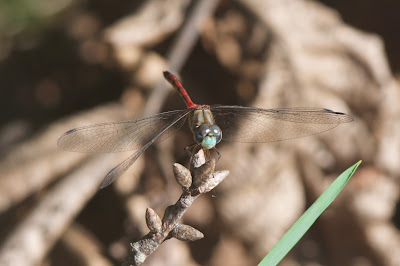 We saw some other neat things (that weren't birds OR insects) like these SOUTHERN GRAY TREEFROGS, an endangered species: 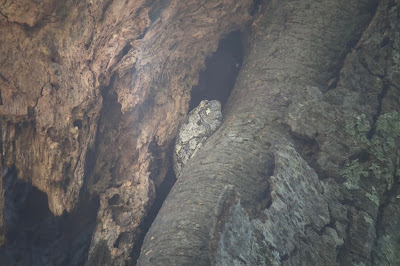 All in all, it was a fun but quick fall session at one of the nation's most famous birding hotspots.  Birdwise, I tallied more than 160 species which was a nice boost for a state I hadn't spent much time in before.  :-)