Shortly after arriving back in the states from the Machu Picchu tour in Peru, I headed west to Arizona to attend the annual business meeting of Field Guides.  So, in the air again... St. Louis --> Las Vegas --> Tucson... and then the drive to Portal.  Of course, birders will know all about Portal, the small Arizonan town that sits in the extreme SE corner of the state.

And, as one can correctly surmise, it was hard for me to visit somewhere like that and turn a blind eye to the birds!  However, even the fun birds of Arizona couldn't keep me healthy; I had come down with some cold-like nastiness (probably from all my flying lately).  So although I wasn't able to participate in all the birding outings, I still managed to get out a few times.

One of the times I did tag along, we headed up to the Barfoot Junction area and saw things like RED CROSSBILL, GREATER PEWEE, MEXICAN CHICKADEE, ZONE-TAILED HAWK, and a whole slew of other expected species.  We had a few warblers as well including OLIVE, VIRGINIA'S, NASHVILLE, ORANGE-CROWNED, WILSON'S, HERMIT, and this GRACE'S: 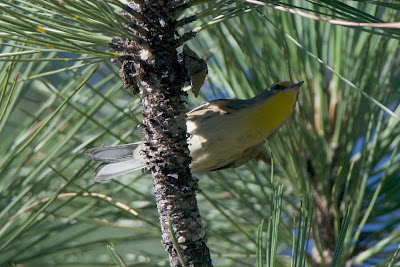 Probably the highlight for me that morning was an adult NORTHERN GOSHAWK that our van saw on the drive up.  It may have been only my second ever in Arizona.

A different day in Cave Creek yielded this WHISKERED SCREECH-OWL roosting in a hole: 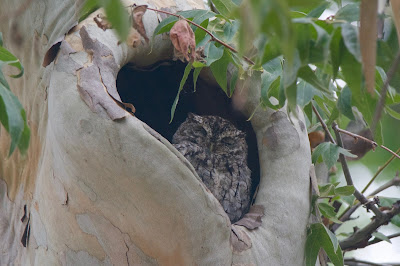 As it so happens, this was the first time I've ever managed a photo of this species.

Back at the ranch, and I mean that literally (we were staying at Cave Creek Ranch), we enjoyed the numerous bird feeders that dotted the relatively-lush grounds.  Here's a panorama of the entrance area: 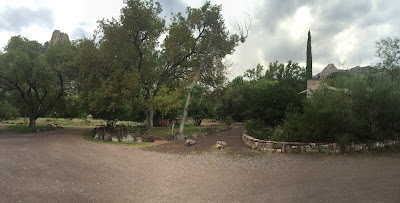 The variety of feeders brought in, well, a variety of birds.  Here's a male BLACK-HEADED GROSBEAK that was particularly fond of the suet: 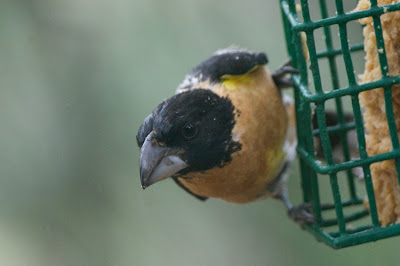 Meanwhile, the peanut butter spread on the tree was a favorite snack for this ARIZONA WOODPECKER.  Jif, anyone? 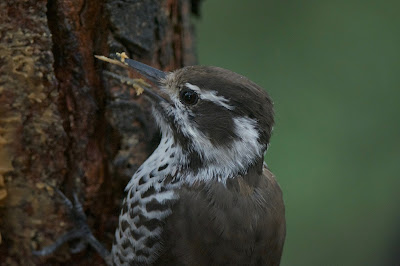 Although the flurry of 30+ people in meetings ebbed and flowed... one flurry of activity never ceased: hummingbirds!  They were a constant feature at the numerous hummingbird feeders and we tallied 8 species at the feeders on a daily basis:

One of the most common species there was BLACK-CHINNED HUMMINGBIRD.  From the side this male does indeed look rather black-chinned: 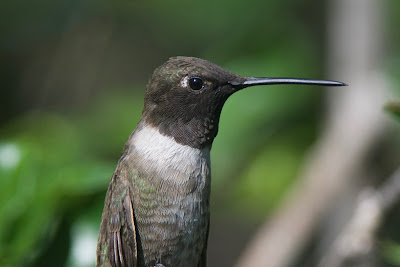 However, as he starts to turn his head towards you, you can see a hint of purple starting to show in the lower throat: 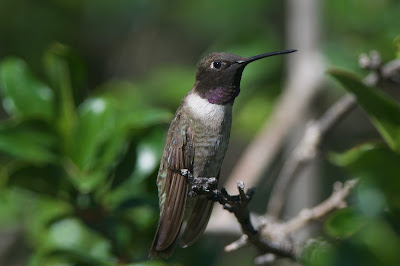 As he continues to turn towards you, you can now see the gorget in full light.  What looked black from the side is now a gleaming purple: 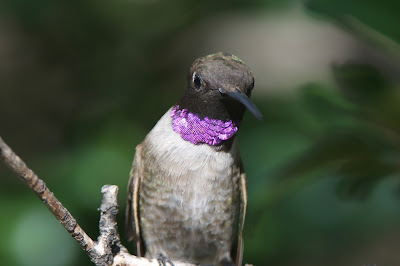 To get a sense of the hummingbird activity, check out this blurry photo I snapped as it was getting dark: 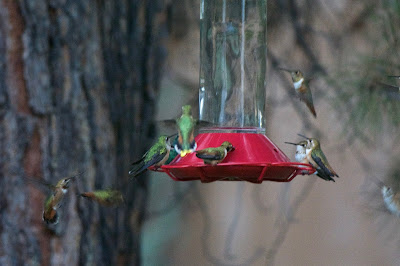 You can see bits and pieces of 11 different hummingbirds in this one photo!  You see, we ventured to a nearby home one evening to see if a reported LUCIFER HUMMINGBIRD would make an appearance (which it didn't).  Still, we were all entertained by the hummingbird activity as they loaded up on food before heading to roost for the night.  As we left this house, we even managed a BLACK WIDOW sighting under one of the deck chairs.

Less-commonly seen at the ranch were the CURVE-BILLED THRASHERS.  Although we heard them often, here's one that came in to one of the feeder trees during an afternoon shower: 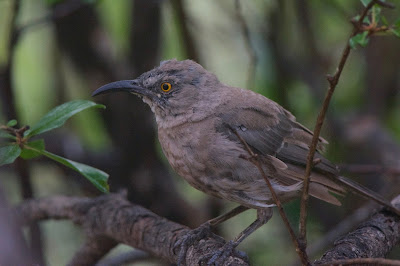 There are no chickadees found at the lower elevations of Cave Creek.  Instead, that niche is partially filled by the stripe-headed BRIDLED TITMOUSE, a species found only in Arizona and New Mexico here in the US: 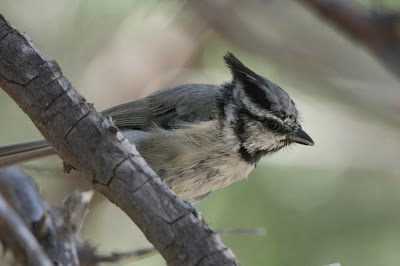 Although not attending feeders, I came across a couple of species of vireos foraging nearby.  Here's the kinglet-like HUTTON'S VIREO sporting its hefty bill: 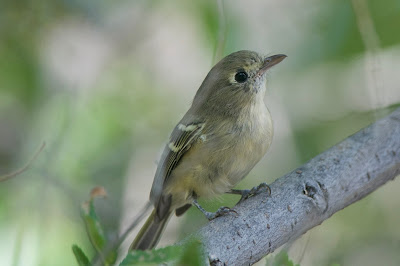 As usual, birds weren't the only flying creatures around!  Here's a FLAME SKIMMER, an aptly-named dragonfly that was perched over nearby pond: 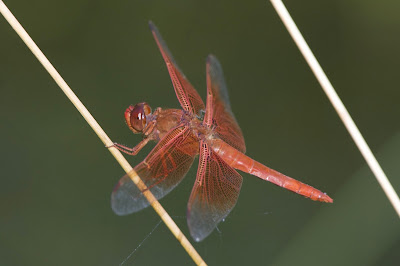 Waking up to the sounds of MEXICAN JAYS and ACORN WOODPECKERS, walking out the door of your cabin and seeing THIS... well, it's hard to beat the view as you approach the Chiricahuas during the monsoon season: 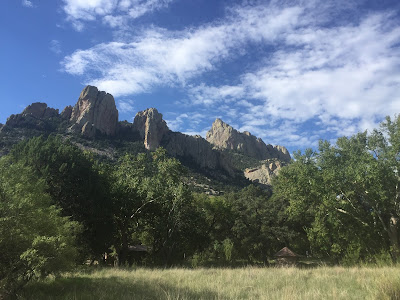 You'll want to pay attention of where you step, though!  Here's a BLACK-TAILED RATTLESNAKE that liked to spend hot afternoons under the porch of a nearby house: 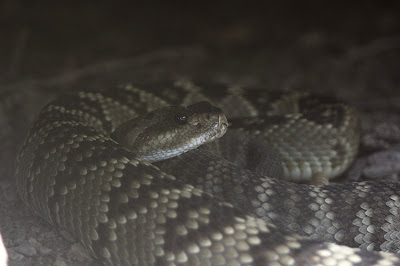 It wasn't much of a threat chilling down there in the shade.  Remember, don't bother it and it (probably) won't bother you.

But, before long, my quick visit to Arizona was complete and it was time to reverse my travels.  Tucson --> Las Vegas --> St. Louis.  Here's the latter as I came in for landing: 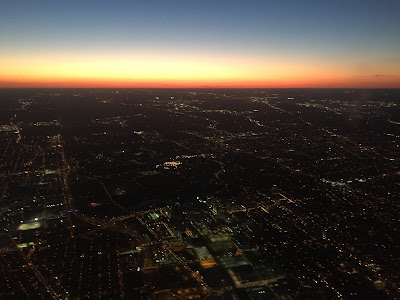