Again, it's been quite a while since my last blog update. With finishing up the semester, I haven't had too much time to bird. Regardless, here are a few pictures from the last week or two.
In driving some backroads, LAPLAND LONGSPURS were pretty easy to come by. We easily tallied over 150+ birds. Here is a distant shot of one on the ground: 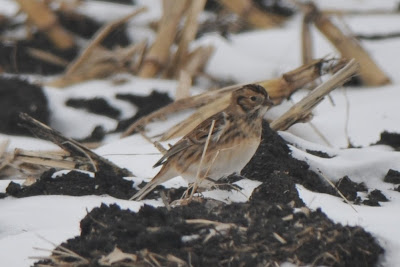 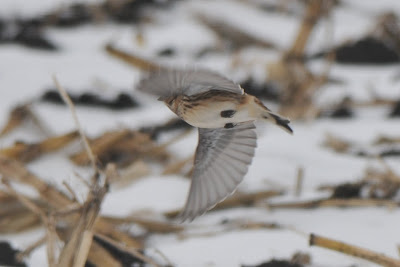 Also on that drive, we found a COOPER'S HAWK munching on what-was-left of a starling. Here is the hawk taking the meal somewhere else: 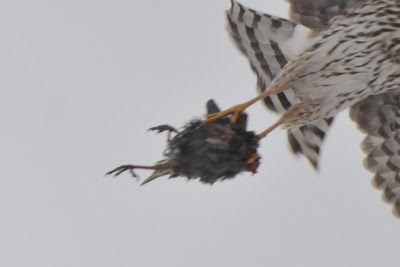 Torre and I hit up the Red Rock CBC on the 19th. It was a fun count despite no record-breaking numbers or unusual birds. Some of our personal highlights included:
2 Barred Owls
2 Eastern Screech-Owls
2 Common Grackles
6+ Red-breasted Nuthatches
500+ Dark-eyed Juncos. Yes, 500!
Some notable misses for us in our area included Golden-crowned Kinglet, Belted Kingfisher, Northern Shrike, Rough-legged Hawk, Horned Lark, etc.
On the 20th, Ashley and I participated in the Saylorville CBC. Again, it was a fun morning out with quite an interesting variety of birds. Some highlights for us included:
1 Eastern Screech-Owl (with visual)
6 American Robins (1 came early when we freaked it out while owling)
100+ Cedar Waxwings
1 Pileated Woodpecker (a rather tough bird in this area)
5+ Brown Creepers
1 Common Grackle
1 Gray Catbird: 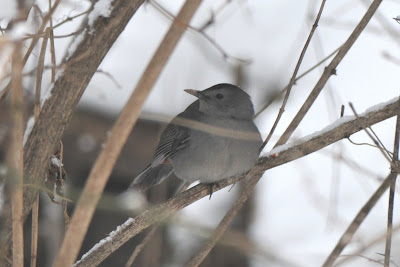 Another good bird for the count included this RED-SHOULDERED HAWK sitting conveniently along a road during a snowy part of the morning: 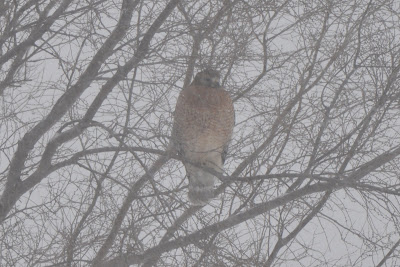 Some notable misses in our area this morning included Long-eared Owl, Golden-crowned Kinglet, Purple Finch, and Sharp-shinned Hawk.
Ash and I will be headed to the northeast for the holidays. Perhaps you'll see a post from there next!
Posted by Cory J. Gregory at 12/20/2009 10:58:00 PM