As July continues to pass us by one day at a time, I’m reminded that we have now been on St. Paul Island for more than 2 months.  With the guiding season here lasting until October, we have more than 2 months remaining.

The weather the last few days has been unremarkable; some misty days, some breezy days, but no real system to get us excited (big storms often bring changes in terms of migrants).  We’re still waiting on our first Red-necked Stint or Gray-tailed Tattler of the season but they’re just around the corner.  In fact, it was on this day last year that I saw my first GTTA.

In the meantime, before the crazy fall goodies start dropping in, we’ve been trying to stay busy with what’s been around.  One highlight was that Ashley and I finally tracked down a LONG-TAILED JAEGER.  This species had sneakily crept onto Ash’s nemesis list through the years but we remedied that yesterday out near the Low Cliffs.  What a looker! 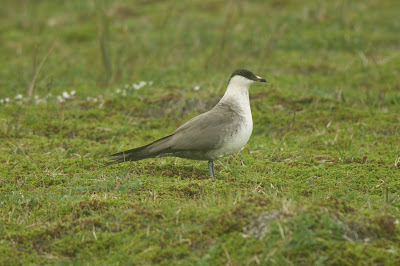 It's actually a decent time to be looking for jaegers; all three species have begun to migrate through and this dark POMARINE JAEGER was sitting in plain view on Salt Lagoon one day: 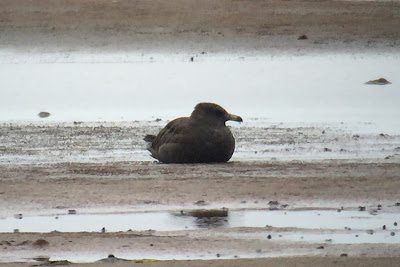 Although they’re beginning to be ho-hum these days, WHITE-WINGED CROSSBILLS continue to hang out on the island.  We’ve now seen them in more than half a dozen locations including this one that was on the beach at Marunich: 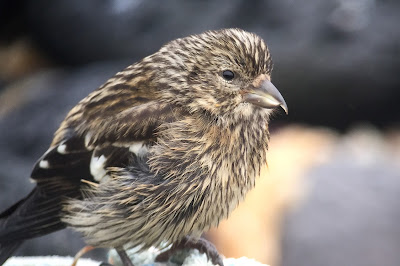 Earlier I mentioned them being tame and the above bird was no exception.  When it saw us 4 guys standing there with tripods on our shoulders, it assumed we were friendly and decided to come check us out.  First it landed on one of the extended tripod legs and then it circled around and landed on a backpack of someone else!  It guess it's been so desperate to find some tree branches on the island (of which we have none) that we were good enough.  The bird eventually settled down on some rope that was coiled up on the beach and I took to digiscoping it with my iPhone.

Just yesterday on our walk up to Low Cliffs, we found the continuing two WHITE-WINGED CROSSBILLS not far from where I left them several days ago.  Here’s a head shot of one of these tame youngsters: 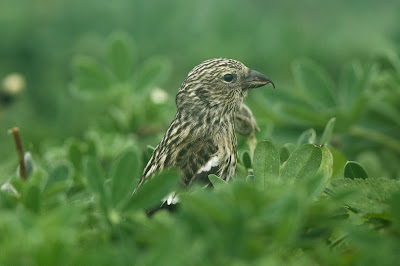 I was interested to see what these crossbills might be eating here on St. Paul Island.  Usually, crossbills are cone specialists (pine, hemlock, spruce, etc) but without cones on the island, it's clear that these birds have had to find alternatives.  Indeed, one of them was eating flies and the other one was having luck extracting seeds from old Dandelion heads: 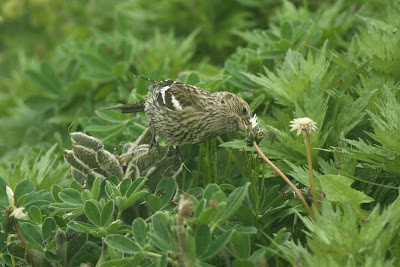 The Low Cliffs provided more to look at than just jaegers and crossbills though.  In fact, the show that the NORTHERN FULMARS put on was amazing; they'd cruise right by your face and, if you're lucky, your waiting camera: 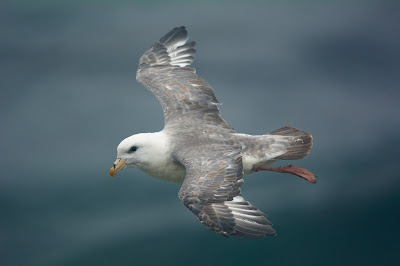 If you've spent time here on St. Paul, you're probably familiar with walking the lava field near Southwest Point.  It's another world out there and I'm often reminded how much I like stumbling through the dips, gullies, and gulches of ferns, lichens, and dwarf willows.  We walked it a bit yesterday and although Rock Sandpipers and Ruddy Turnstones were common, my adrenaline spiked when I saw a different sandpiper in the mix.  Turns out, it was "only" a PECTORAL SANDPIPER: 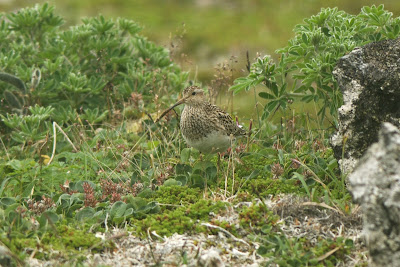 Still, though, it's flagged in eBird (meaning it's noteworthy) and it's certainly the first time I've ever seen this species sitting on the tundra in a lava field.

It was about this time last year that I was lucky to find a banded RUDDY TURNSTONE at Marunich.  It turns out that it was banded earlier in the year in Japan!  Well, I’ve been keen to look through more turnstones this year to see if lightning would strike twice.  Turns out, I DID find another turnstone wearing a band at Marunich.  However, this bird only had the metal band; no flag or color bands to narrow it down to an individual.  When this happens, we know it’s been captured by someone but it’s almost impossible to tell who/when/where.  I tried to get some close-up pictures of the band but still couldn’t make out much: 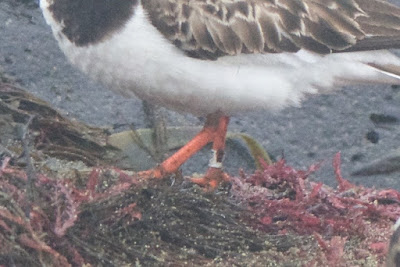 Nope, certainly not a bird... but the NORTHERN FUR SEALS that use St. Paul Island have been entertaining as of late.  Most of the females have now given birth and the beaches are alive with the high-pitched bleating of the youngsters.  Many of the medium-sized males have moved up the beach and now lay squarely in front of the seal blind.  If you look carefully, this below photo of a fur seal shows the seal blind as a reflection: 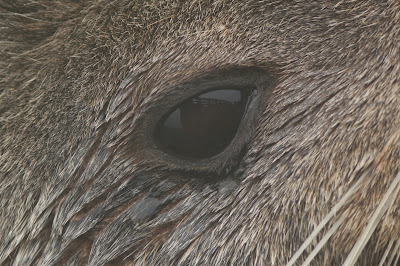 I'll leave you on this cloudy Sunday morning as the July wind swirls out of the south with a mist on its shoulders.  If you have any questions or comments, feel free to reach me at arcticory@gmail.com.
Posted by Cory J. Gregory at 7/19/2015 12:47:00 PM